After eight straight days of clouds and rain, we finally saw a very strange sight..it was bright and up in the sky. Could it possibly be the SUN??

I will admit, such a straight run of lousy weather was making me a tad on the crabby side. We haven't had a run of such bad weather since we hit the road. At least I was keeping myself amused, learning the ins and outs of our computer reservation system, DigiRez. I think I'll have it down pat, oh, say about October when we leave ;-)! I had it pretty good, at least in that I was mostly able to stay dry, working inside. Al, on the other hand, was pretty wet by the end of each day, even with the guys trying to find as much inside work as possible. I tell you, the bath houses were cleaned within an inch of their lives, and are as sparkling as possible for the old buildings that they are.

We did go out last Tuesday, on our day off, and purchased our annual pass for Acadia National Park. We picked up a couple of books on the hiking and carriage trails, and had a nice talk with a couple who are volunteering at the Hull's Cove Visitor Center for the season. We also drove the Park Loop Road, getting an idea of the lay of the land for future expeditions. There are miles and miles of hiking trails all over the island, and additional miles of carriage roads, which are multi-use trails (walking, biking, horses). It was very drizzly and foggy, so no pictures that day. We then worked Wednesday through Sunday over Memorial Day weekend. This isn't a huge holiday for us, as it is a little early for tourists, but we did have quite a few more than I would have expected with the lousy weather forecast we had.

Yesterday, Monday, was a day off and that's when we finally saw the sun! We did take advantage of it, and headed out in our hiking boots and fortified with maps, to take a couple of walks. And pictures! 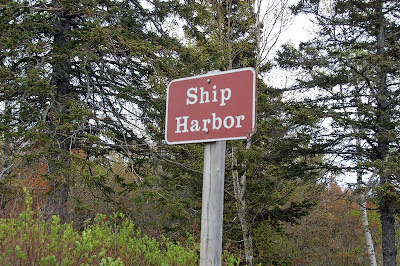 Our destination was a town called Southwest Harbor, on the "other Lobster claw" of the island. 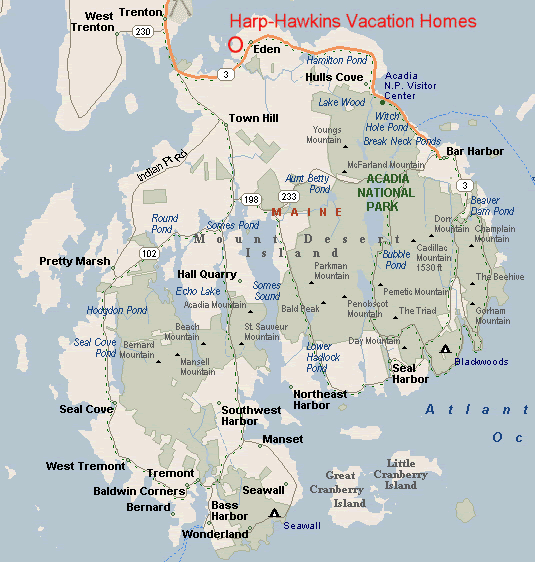 The island is split in the middle by Somes Sound, the only fjord on the east coast of the United States. If you use your imagination, it looks like two lobster claws. 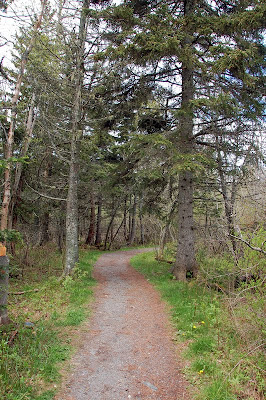 Our first destination was a few miles south of town, at Seawall, The Ship Harbor Trail. It's an easy 1.3 mile walk through woodland to the mouth of Ship Harbor. It used to be an interpretive nature trail with signposts matching a descriptive brochure, but all that is left is this... 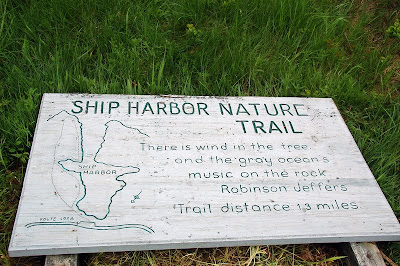 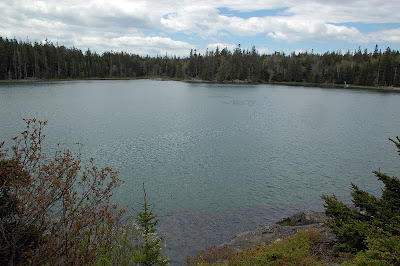 The trail loops close to the edge of the harbor 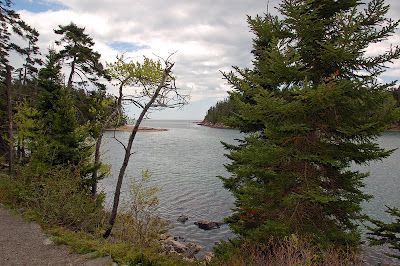 and heads for the open mouth of the harbor. Ship Harbor got it's name from a legendary tale that during the Revolutionary War an American ship was fleeing from a British gunboat and became stuck in the mud flats at low tide. 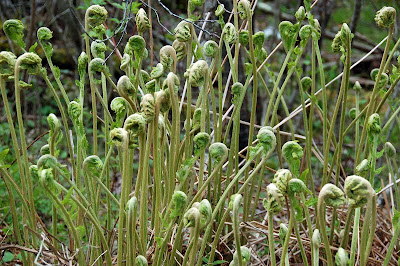 Spring plant life is evident along the walk, with these fiddlehead ferns coming up (locally they make soup with these) 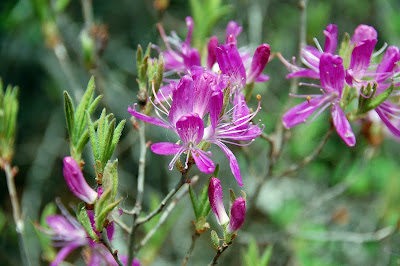 and these pretty purple wildflowers. 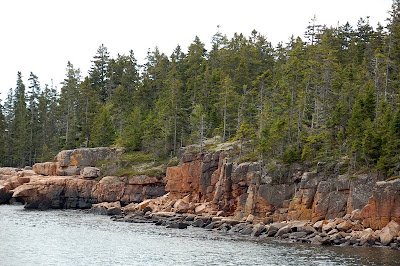 The granite cliffs loom over the mouth of the harbor 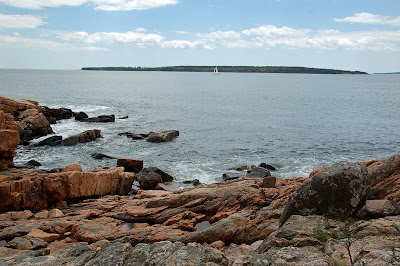 and small waves break over the rocks on our side. One of the Cranberry Islands are seen in the distance. You can head over there via a mail boat for day trips. 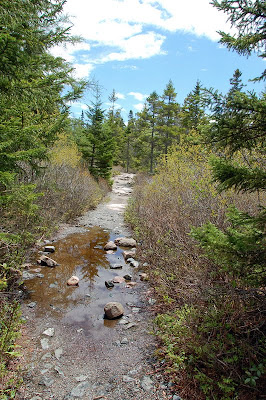 The trail headed back inland...did I mention it was wet? 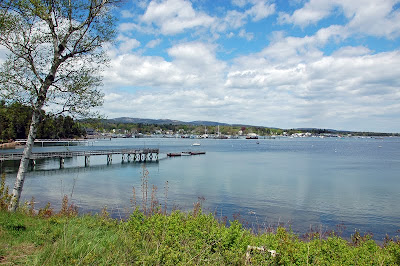 We drove back to Southwest Harbor for some lunch. We stopped at The Little Notch bakery as they advertised lots of sandwiches, pizza, and of course baked goods. We were going to try their paninis, but they didn't have any yet! The owner explained they had just opened, their chef had been delayed, so all they had was pizza. Ok, twist my arm, we'll have pizza. It was, I have to say, probably the best pizza we've had outside of New York so far. We parked here looking over the harbor and ate lunch, simply delightful. I also tried the blueberry soda, which I liked very much, and picked up a blueberry danish, which we shared later on...oh, was that good! 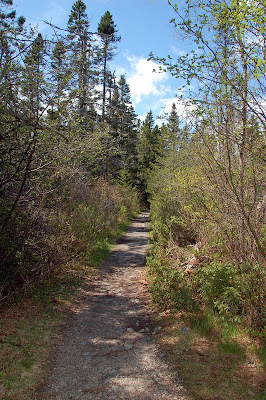 Back on the trail...the Wonderland Trail this time. Its a 1.4 mile easy walk along an old road that brings you to granite outcroppings along the shore which form tide pools at low tide. 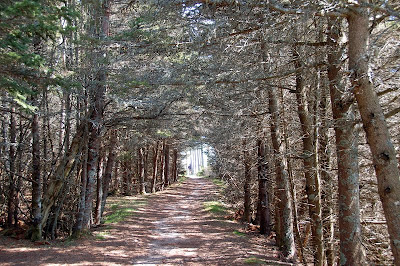 I loved this "tunnel of trees" we passed through. I can't wait to see it fully leaf'ed out! 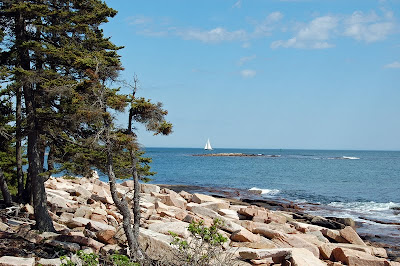 A nice spot to sit and watch a sailboat go peacefully by. 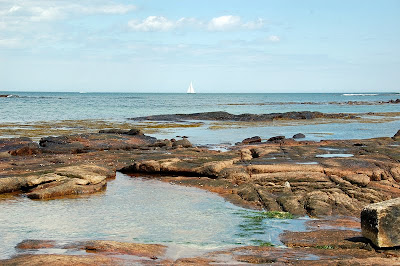 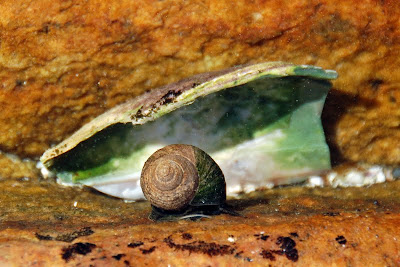 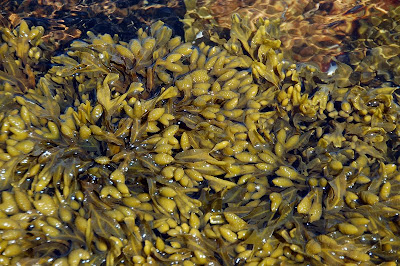 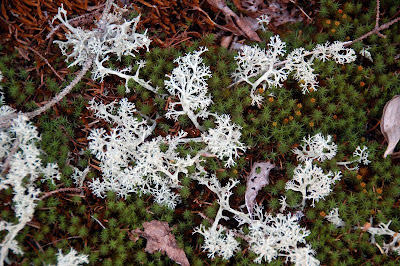 Back through the forest and I found some interesting mosses 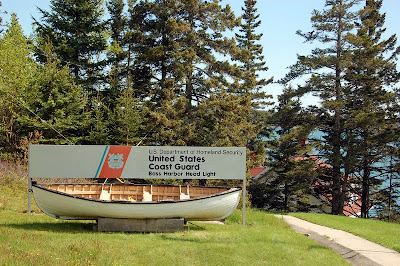 Last stop of the day...geocaching at Bass Harbor Lighthouse...we got our first Maine cache and souvenir! 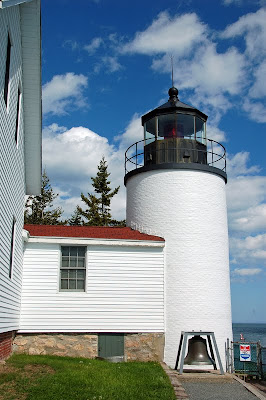 Bass Harbor Lighthouse is the only lighthouse physically on Mt. Desert Island 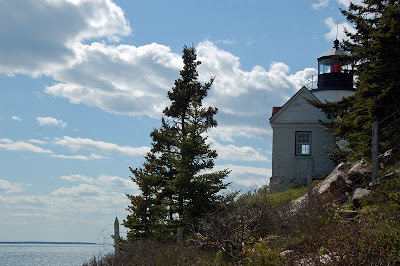 A climb down the rocks shows us the backside view of the lighthouse. I bet it'll be pretty at sunset. 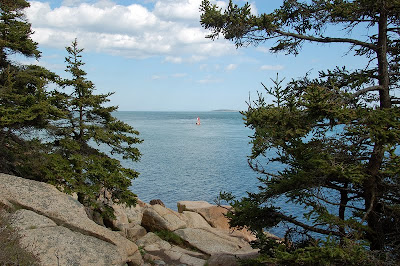 Final shot of the day.

So we finally got some sun, and some pictures to show...besides food :-). Now its back to work, we actually have "orientation" this Saturday to go to...after working three weeks :-)! We missed the first one by arriving late, so we have to "catch up" with the second group of workampers this Saturday. Well, at least I'll know what they're talking about in regards to the reservation program! We're thinking if the weather will be nice on our next days off we may take a drive to Roosevelt Campobello International Park in New Brunswick, Canada. And I foresee a puffin cruise in my not too distant future as well :-).
Posted by Al and Karen at 5:58 PM