It's a cold, rainy day today here in Bar Harbor, but we had expected it and did not have any plans beyond daily chores and errands. Al has gone off to Bangor to have the truck serviced and do the prescription run to WalMart. The dogs and I stayed back here at the campground to do some laundry and make up the grocery list for tomorrow, so that if the weather clears in the morning we can take our first drive into Acadia N.P. So nothing earth-shattering is going on, but I DO want to fill you in on a great little restaurant we found last night!

We've decided with the multitude of dining opportunities in the area it would be an absolute crime not to investigate at least some of them. So we've bumped up our dining out budget a bit, and decided our night out each week would be our last night of the work week (too tired to cook by then!). I've been using TripAdvisor ratings quite a bit, and last night we went to Side Street Cafe, Bar Harbor. It is ranked #2 out of 103 eateries in Bar Harbor, and it did not disappoint! It's on the small side, and is housed in a former home on Rodick St. There is a small but lively bar area, and dining tables scattered in different "rooms". We started out with soups: 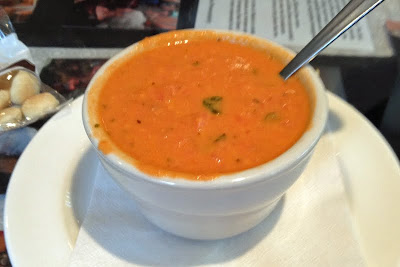 Tomato basil bisque for me 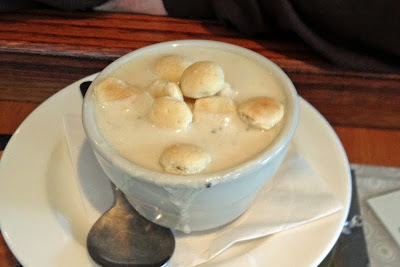 Clam chowder for Al...and I understand that up here, there is only ONE type of Clam chowder....the right one :-) 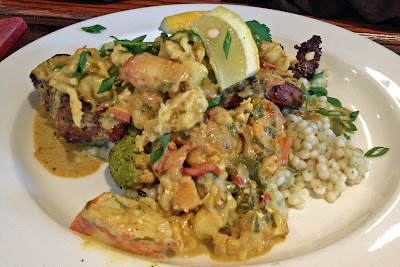 Al's entree was a special for the night...curried lobster and strip steak with veggies and sauce over couscous...second time for lobster for him in less than two weeks :-) 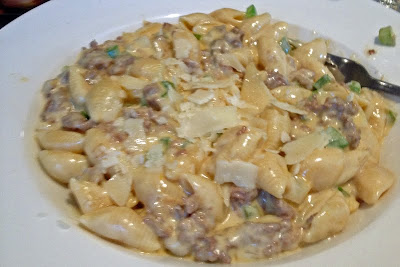 and I had to try their famous "build your own" macaroni and cheese...I had onions, peppers and philly steak added to my mac n'cheese with fresh parmesan chips on top...oh my I think I've found a new favorite dish!! 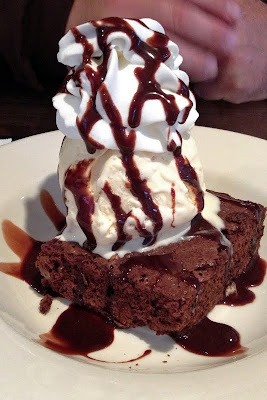 We were disappointed that the chocolate bread pudding for dessert was no longer available, so we "made do" with sharing a brownie sundae....we have to do what we have to do, right?

We VERY much enjoyed our dinner here, service was great, and it didn't completely kill our wallets, so we definitely plan on making return trips here. I do think next week will be a trip to Rosalie's Pizza, though, as the pizza in the window looker awesome as we walked by! I had a free movie rental coupon from Redbox, so we stopped at Hannaford's (grocery store) on the way home and rented the movie "Jack Reacher". I'm a fan of Lee Child's Jack Reacher series, but wasn't quite sure if I was going to like Tom Cruise in the part. I did like it better than I thought I would, and it was an enjoyable action packed movie to watch. I also finished a book a couple days ago that I enjoyed, "11.22.63" by Stephen King. I haven't read one of his books in a long time, but I did enjoy this one. It's not his typical bloody spooky type of book, but a time travel tale of what if you could go back in time and prevent the assassination of JFK. If you like reading fiction, I would recommend it.

We hope to get out to Acadia tomorrow as I stated before, so I will hopefully have something other than food to write about soon :-). Although I do think food is a topic many folks are interested in ;-).