12 Days, 2012 miles, and we have finally arrived at Green River Lake State Park, Campbellsville, Kentucky...ready to start our fourth season working at Amazon!

We had a pretty quiet, uneventful drive after leaving from Chalk Creek Campground in Nathrop Colorado. We dropped a little further south and picked up Highway 50 heading east out of Colorado. The drive was beautiful through Bighorn Sheep Canyon, and as we drove the twisty roads, after all summer, we finally saw a herd of female bighorn sheep, right alongside the road. I thought it would be a much nicer, quieter drive than heading out through Colorado Springs, and I was right :-). We stopped for the night in Lamar CO, on the Kansas/Colorado border. I had decided to break up the roughly 900 mile drive from Nathrop to Osage Beach Missouri into three days. I find that 300 miles a day is a pretty good limit to my driving endurance; if I don't need to go further than that, I'd rather not.

We continued across Kansas on Highway 50/400, a decent two lane highway. The only difficult thing about avoiding the interstates is the lack of large fuel stops or rest areas. I had to carefully plan where we would stop for refueling and lunch along the way. I found truckstopsonline, where I could gather information on big rig fuel stations on any highway in any state, not just the interstates. It really helped as we traveled. We stopped in Goddard KS on the second night, just outside Wichita. We then followed Highway 54 straight into Osage Beach MO, right by Lake of the Ozarks State Park. We stayed at Osage Beach RV Park, which was a very nice private RV park. One of the nicest we've stayed at. We decided to spend three nights here (they had a three night mid-week special price) and it looked like a nice area to rest for a couple of days. Unfortunately, the weather was not looking very good, so our first day there we went to the state park in the morning and took a long walk with the dogs to stretch the old leg muscles. 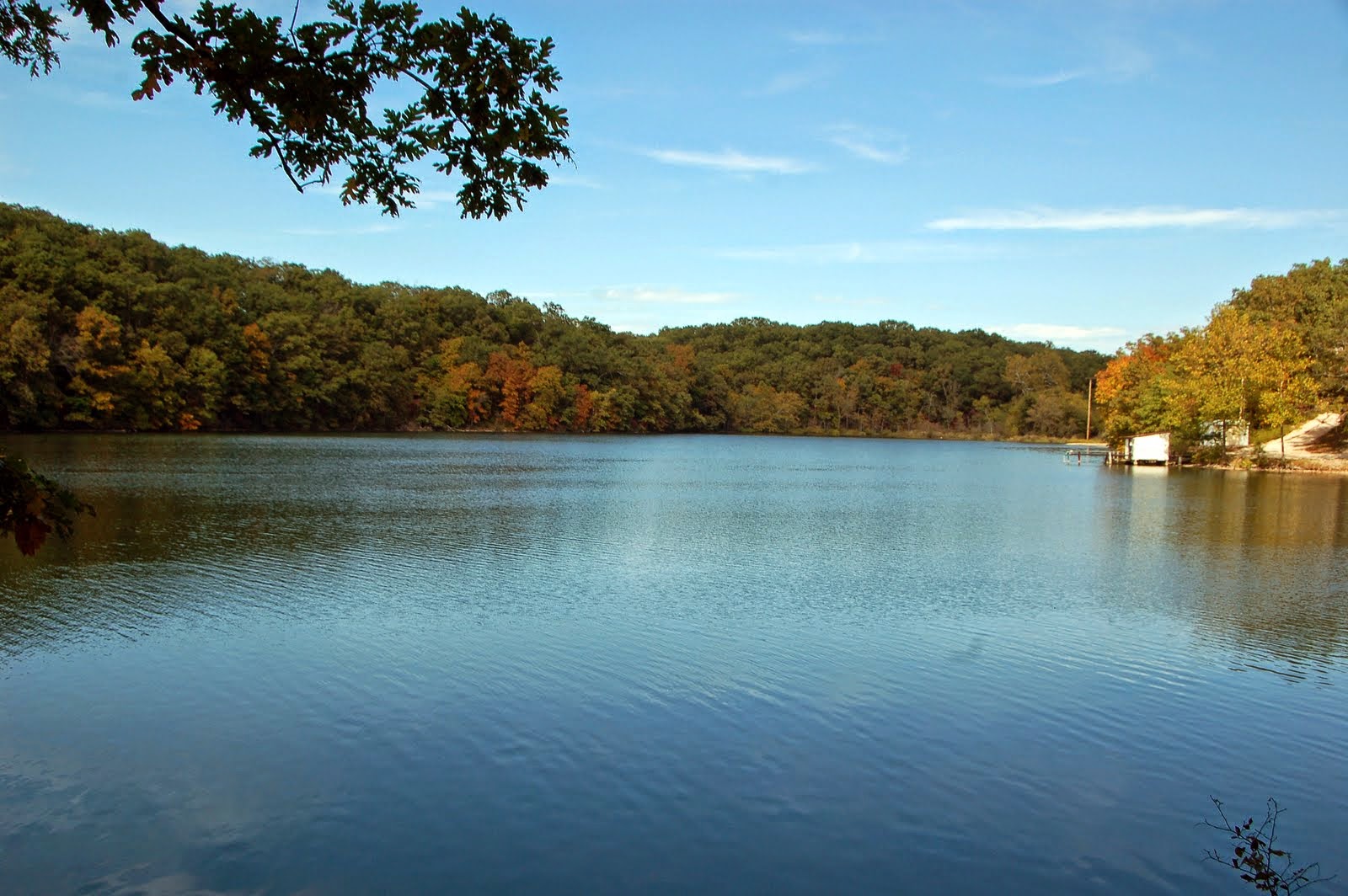 Lake of the Ozarks is really nice. It's very large, with fingers reaching out in all directions. 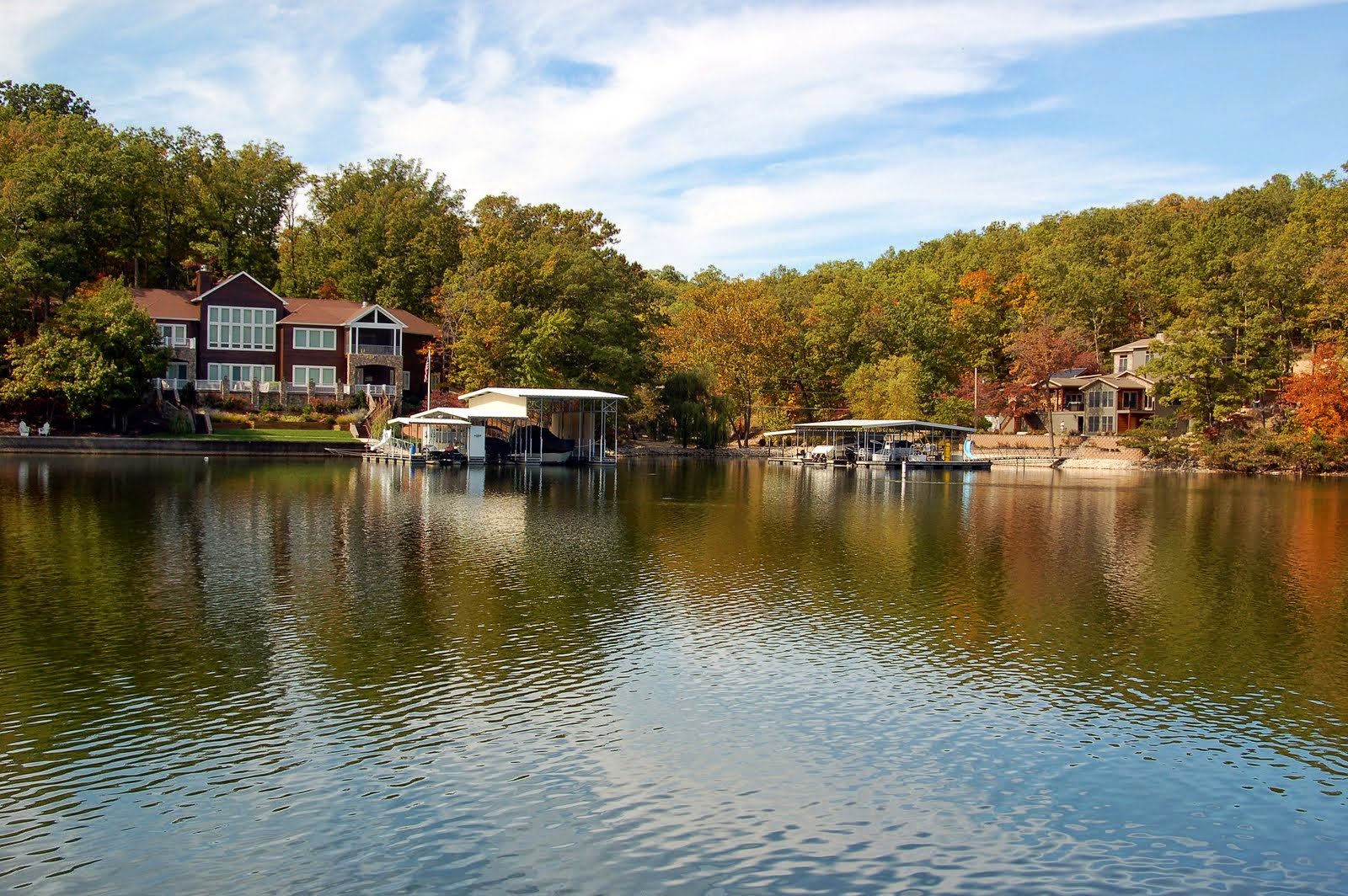 It seems like a highly desirable area, both for year round residents and summer homes. Some of the homes along the lake shore were beautiful. 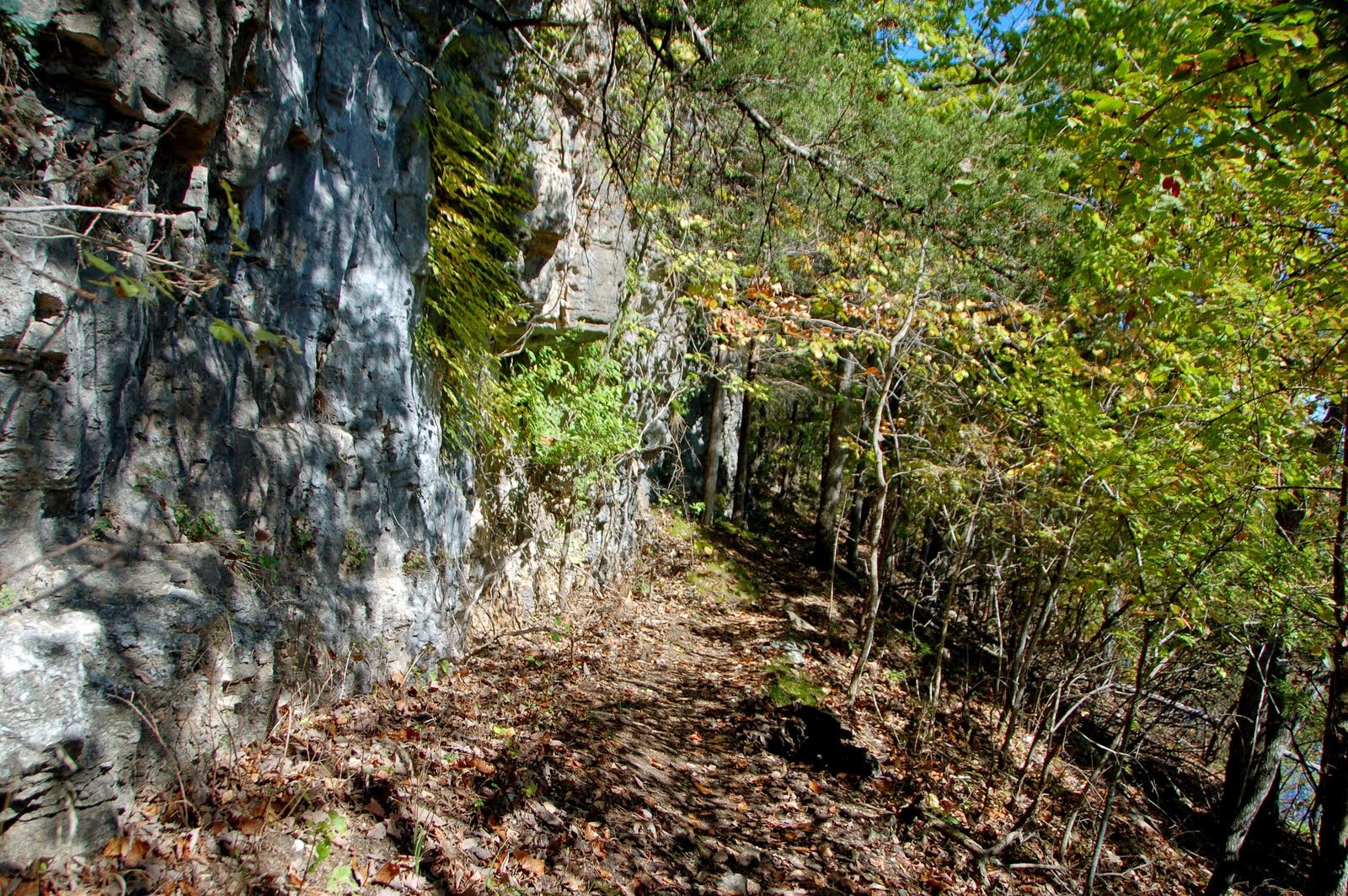 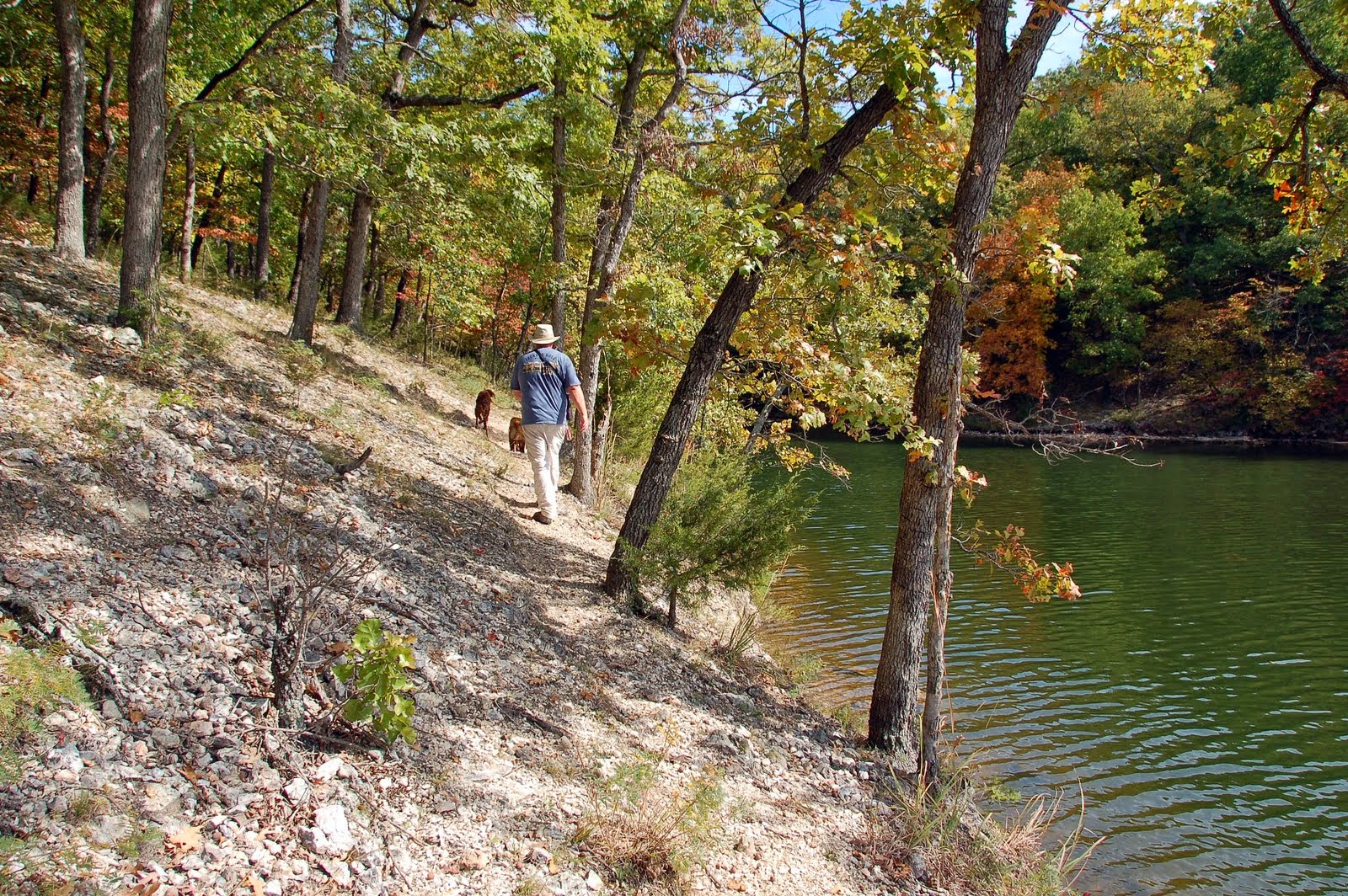 It felt odd being back in heavily wooded trails again...also had to be careful of ticks again!

That first night it started raining, and kept on raining all the next day. It was a good day to stay in, catch up on paperwork, watch a movie and make some soup....so we did :-). Unfortunately, it was still raining the next day, and we had to move on as the campground was fully booked for the Columbus Day weekend. I don't care for driving in the rain, but on we went. Our destination was South Marcum Campground, a COE campground on Rend Lake, Benton Illinois. It rained the entire way, including our journey through the city of St. Louis, which I will really try to avoid in the future....maybe it would be better on a dry day, I don't know! South Marcum was an awesome campground, with full hook-up sites, level and paved, and lots of space between sites. We really liked this campground and would like to return one day when the weather is better. We stayed here two nights, as we couldn't come into Green River Lake until Sunday. The rain did hold off in the morning of our full day there, and we got in a five mile geocaching walk before the rain came down again.

This morning we left South Marcum, and finally arrived back in eastern standard time...back in synch with the family :-). We will be getting set up tomorrow, getting the pantry refilled and ready for quick meals. We start at Amazon on Tuesday, with out orientation and safety school during the day, then my regular nightly shift starts on Wednesday. Al will find out his schedule on Tuesday, because, after all, he's special :-).

So for the next ten weeks I probably won't have too much interesting to write about. Between work and some family issues we are dealing with, I'll be pretty busy. I'll try to make some quick updates about how work is going this year, and anything interesting we may find going on. Don't forget about us, we have lots planned for this winter in Florida :-)!

Just a short post to note that we are on the move across the country. We had a snow delay the morning we were scheduled to leave the ranch, but finally got rolling just after lunch...time for the snow to clear off of Togwatee Pass. We made it as far as Rawlins, WY that day, and the next day continued on to Golden, CO, just outside of Denver. We met our friends Joe and Sandi Wingert, co-workers from Chalk Creek in 2012, and have a great Italian dinner (in short supply around Jackson LOL) and a nice geocache hike the next morning. Then it was a short 2 1/2 hour drive down to Chalk Creek RV Park, where we spent a fun evening at one of our favorite restaurants, Eddylines, with our former employers, Lars and Tamara Karlsson and the girls, Karina and Jenna. The next morning we found ourselves at the Rooster Crow in Buena Vista, having a long breakfast/brunch with Jack and Joyce Aughtman, who also worked with us at Chalk Creek. We spent the afternoon driving up to St. Elmo's, doing some geocaching and admiring the golden aspens. We had our farewells at Chalk Creek with a pizza party and this morning were on our way across the midsection of the country, headed for Campbellsville Kentucky and our next stint at Amazon. No pictures, but we will be stopping for a couple of days at Lake of the Ozarks in Missouri, and hopefully the weather co-operates for a bit of exploring as we wait to get into Green River Lake State Park. 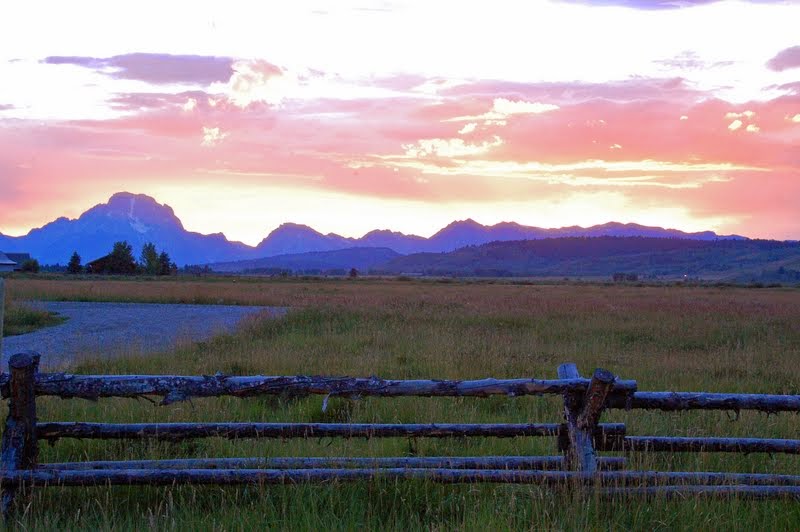 Farewell, Grand Tetons, until next spring!