I feel like a slacker this year with postings....I just haven't felt that there's been very much to talk about! I've taken some pictures, but overall I'm not happy with the quality of them. The air seems awfully hazy much of the time, and I'm having a difficult time catching colors and composing what I feel are nice pictures. I'm especially frustrated when I see the beautiful pictures Sherry over at In The Direction of Our Dreams has been taking. So if you want to see some gorgeous pictures of Acadia, head over there :-).

Regardless of the weather, we have gone out and about. There is a lot to do and see without going too far.
We went geocaching one day on a scenic drive I had read about, on Highway 182 between Franklin and Cherryfield. The was a sign as we were entering Cherryfield stating that it was "the blueberry capital of the world"; so why is it named Cherryfield?? :-). Anyway, there was a cache in this neat little park... 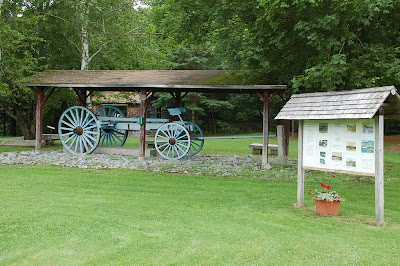 The vehicle that is on exhibit is a galamander. This vehicle, whose name means granite lifter, was used in local quarries for nearly 100 years. It could lift several tons of granite and carry it over miles of rough roads. As far as they know it is the only surviving intact garamander in existence. 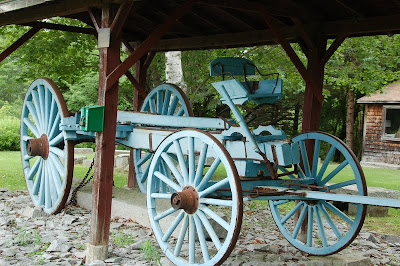 The cache was very well hidden, but we were persistent and eventually found it. 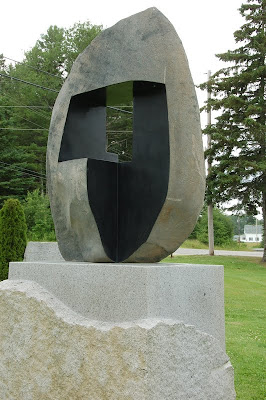 There is a beautiful sculpture of granite on the grounds as well. What a difference from rough to finished. 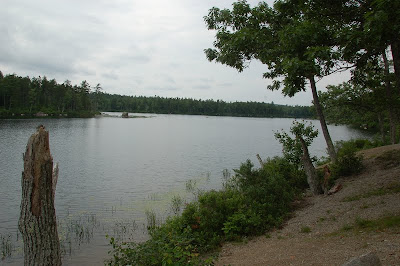 We found a short trail leading to a very pretty lake that had no other visitors. 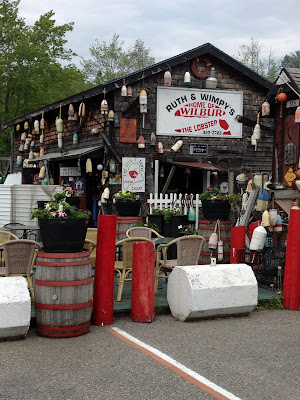 One day we stopped in Hancock and had lunch at a local hangout, Ruth and Wimpy's... 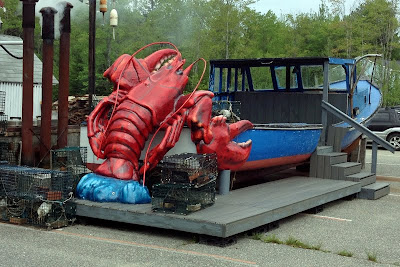 home of Wilbur, the lobster! 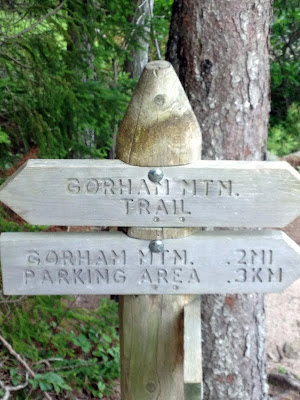 We took the dogs for a walk on Gorham Mountain Trail 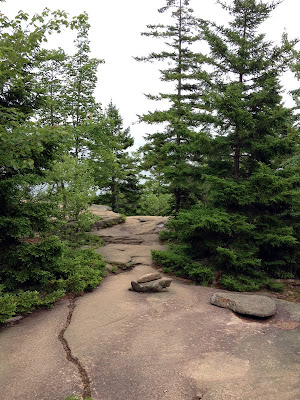 Most of the trails around here go across rock... 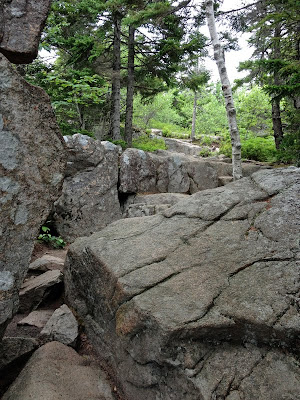 and often involve some rock scrambling! Chelsea did ok, but we do have to stop and let her rest more often than we used to. Occasionally she does need a boost up some of the higher steps. 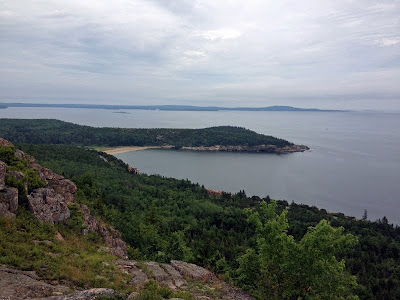 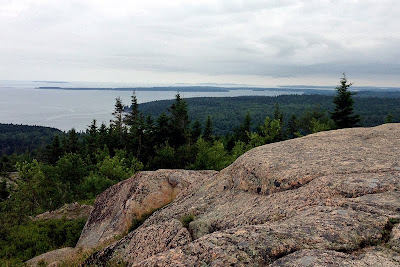 The views from the summit were great! 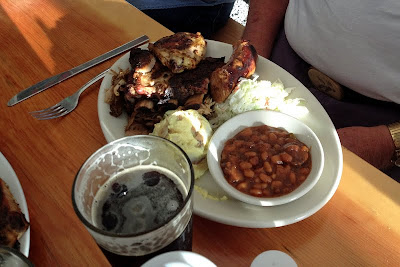 One of our favorite places to eat out this year is the microbrewery Maine-ly Meat. This is their small sampler platter :-) 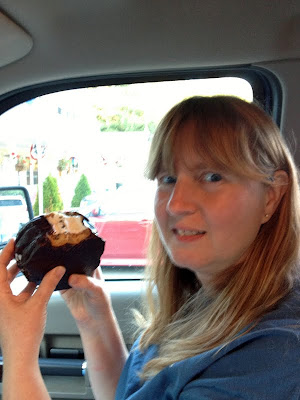 Of course, let's not forget ice cream....this "Halo"...vanilla ice cream in between two chocolate chip cookies then dunked and coated in milk chocolate....lasted me 5 nights :-)! 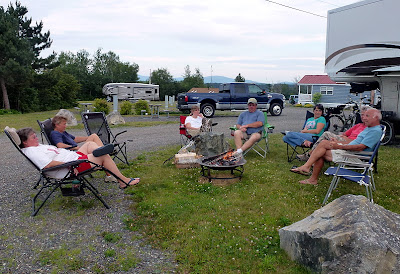 We've had visits from lots of road friends...we had a campfire with the Carolina Clan one night at their campground, the Narrows Too. 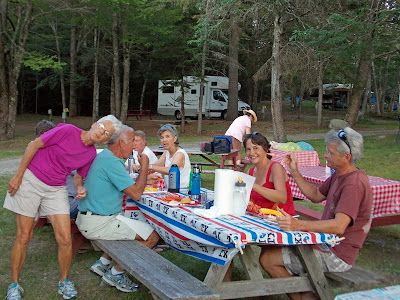 Then they joined us for a lobster boil! 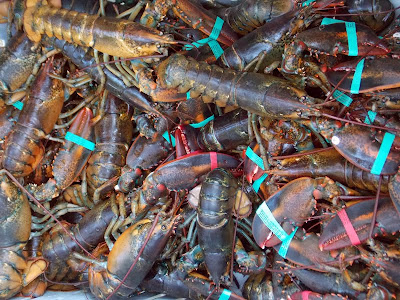 Look at all those lobsters!! 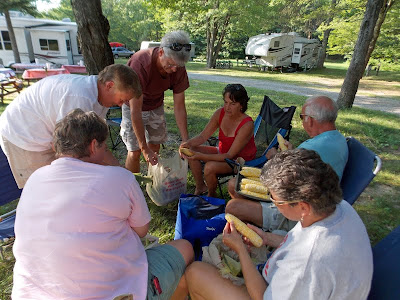 Have to have corn-on-the-cob as well... 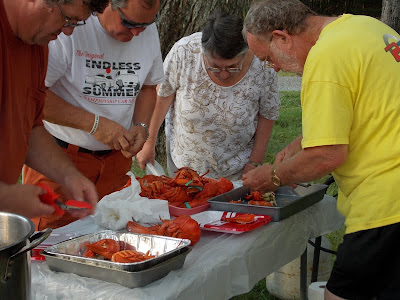 These lucky folks had a competent crew of "lobster preppers" to make the feasting easier. 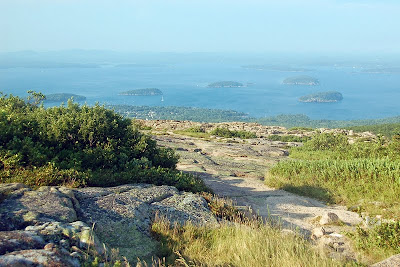 We also had friends Jim and Judy visit us. We've been friends from NY for a long time, and stay in touch even though we've all left the Island. They were close by in New Hampshire, and came up for a few days. It was a busy couple of days, and ended with a late afternoon ride up Cadillac Mountain and dinner at Testa's in Bar Harbor.

So that's pretty much what we've been up to the past couple of weeks. Good friends, good food, and good times. We'll have to see what we can get up to in the next couple of weeks!
Posted by Al and Karen at 12:45 PM