No, not hiking, but in the truck :-)! We are in no condition to hike to the summit of a fourteen'er :-). We did, however, head on over to Colorado Springs, and make the drive up Pike's Peak, America's Mountain. The Pike's Peak Highway is 19 miles from the toll-gate entrance to the summit and is a 2-lane road ascending more than 6,000 feet in elevation to 14,110 feet. It is strongly suggested that you visit the website for important information on mountain driving safety, and you can also pick up discount coupons for $2.00 off the entrance fee, as well as coupons for a FREE hot donut at the summit (which were very tasty). We did as the safety tips suggested, and drove straight to the summit, saving our photo stops for the way down...this is much gentler on your vehicle's brake system. 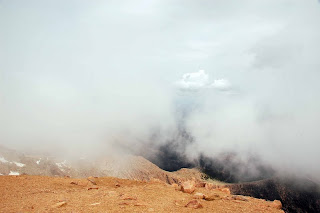 Yes, there was a cloud bank sitting right on the summit! 15 seconds drive down the road, all is clear. Go figure. 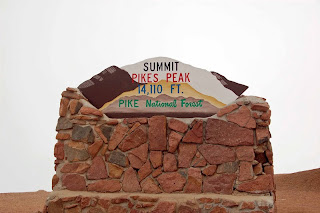 Here's the summit sign. The wind was howling over 40 mph, and the temperature
without windchill factored in was 31 degrees. We did not stay outside for very long. We did, however, pop into the visitor center for a quick look, and collect our free donuts ( I forgot to take a picture before eating it, sorry!) 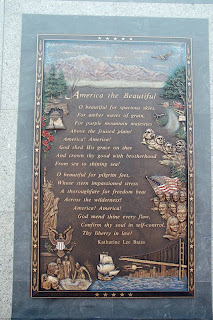 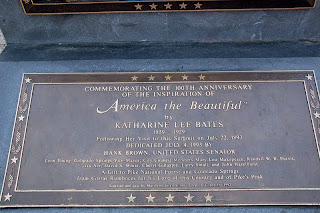 In 1893, at the age of thirty-three, Katharine Lee Bates, an English professor at Wellesley College, had taken a train trip to Colorado Springs, Colorado, to teach a short summer school session at Colorado College. Several of the sights on her trip inspired her, and they found their way into her poem, including the World's Columbian Exposition in Chicago, the "White City" with its promise of the future contained within its alabaster buildings; the wheat fields of America's heartland Kansas, through which her train was riding on July 16; and the majestic view of the Great Plains from high atop Zebulon's Pikes Peak.
On the pinnacle of that mountain, the words of the poem started to come to her, and she wrote them down upon returning to her hotel room at the original Antlers Hotel. The poem was initially published two years later in The Congregationalist, to commemorate the Fourth of July. It quickly caught the public's fancy. Amended versions were published in 1904 and 1913. 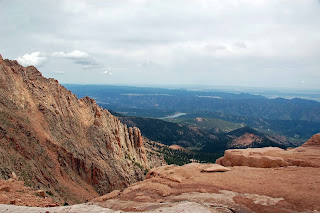 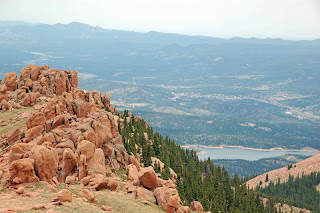 Beautiful views as we wound our way down the mountain. 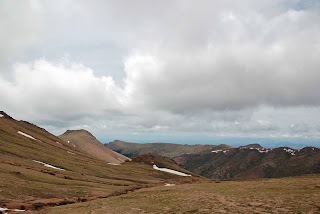 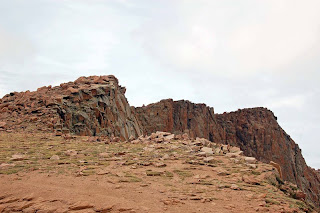 A barren rocky vista at the top of the mountain 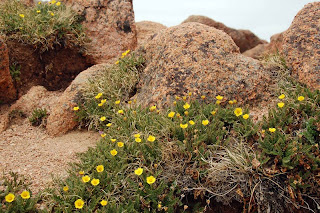 About a third of the way down the mountain, there's a ranger station that you must stop at and have your breaks checked for temperature...if the temperature is higher than 300 degrees you must pull over and wait for them to cool down. Al was doing an excellent job of managing our speed using his gear shifting, and our brakes measured 67 degrees...good to go! 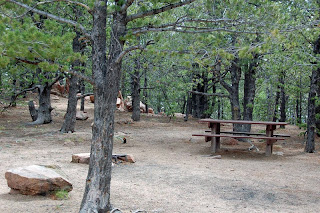 Picnic grounds at the halfway point. 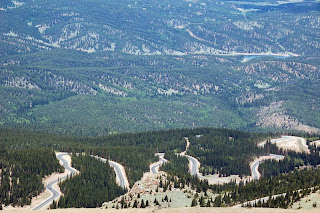 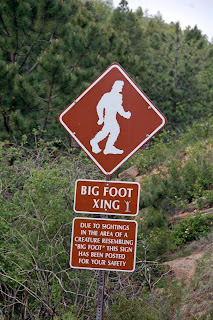 This is for our nephews...come on up guys and look for Big Foot :-)!

After our drive, since we were in urban civilization :-), it was time to find a Sam's Club and stock up on supplies. Being that we have the use of a "workamper" freezer while here, we especially stocked up on meat and poultry items at a better cost than in the local grocery store. I think it will definitely help the grocery line in my budget, which has been going over since we arrived in Colorado!

We've done a couple of hikes in between then and our work week which I will post about as soon as I have the pictures organized. We are very busy this weekend at the campground, being that there are three big happenings going on: Father's Day (Happy Father's Day out there to all the dads!), the FIBArk whitewater festival in Salida, and the Colorado HOG Rally here in Buena Vista...yes, we are filled up with Harley's this weekend :-). It's been great fun getting folks checked in today, and we're also taking a lot of reservations this week for July and August. I will say this, it's been quite interesting on the phone, you do get to talk to all sorts of different folks ;-). And rarely do you get the plain, straight-forward  reservation that takes only a few minutes to book. And of course there are changes, additions, coming in early, adding folks, and cancellations. Those are the worst, usually because there are lousy circumstances causing a cancellation...or at least they tell us! I think my worst so far was this week. A woman called to cancel two reservations for the weekend, and since it was only one day away she would lose the first night's deposit. I asked if she would like to re-book for a later date, rather than cancel, as this would save her deposit. Lordy, she started to cry on the phone, and told me her husband was having an affair, and they wouldn't be camping ever again. Oh, my, what do you say?? I told her I was sorry, hoped she would be feeling better soon, and took care of her booking. I was in tears myself hanging up. I will say, by the end of the summer, I will have just about every possible scenario figured out in this Campground Manager software system!

We are also working with the greatest co-workers this year, and the campground owners are wonderful. We were discussing how pleased we were with our decision to come here rather than accept offers in Colorado Springs or Estes Park. The urban areas seem so crowded and busy, especially the traffic. This area is so nice, the recreational opportunities are boundless on our days off, and we're just plain happy being here. Maybe I shouldn't say this, folks will be lining up to work here :-). Seriously, it's been a very enjoyable experience so far...getting used to the dryness has been the only drawback.

Well, that's about it for now...I'll be back with pictures of hikes and ghost towns soon :-)!