Another beautiful sunny day for a day off, and after chores and errands were done, we had decided to take a short ride to the north of Buena Vista to Clear Creek Canyon, where we had read there were a couple of ghost town areas. We had previously driven a short way up the road alongside Clear Creek Reservoir, but had turned back upon reaching Clear Creek Ranch, a guest ranch known specifically for fly fishing trips..it looks really nice if anyone is interested! This time, we kept going. The sign had said 8 miles to Vicksburg, 12 to Winfield. I had also read the road was "a bit bumpy"; um, yeah, just a bit! Al put it in four wheel drive to smooth the ride a bit, and we slowly bumped our way up the canyon. 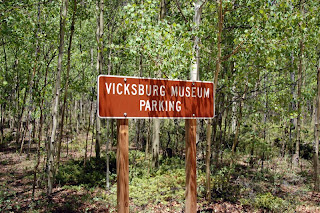 There were a few buildings deep in the forest before reaching the actual historical site, and a sign was here to guide us into the "museum" area. A short walk back through the beautiful forest led us to the buildings. 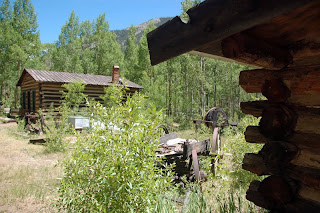 The south side of the road was open to the pubic. These are buildings and accessories that have been maintained by the Historical Society of Chaffee County. 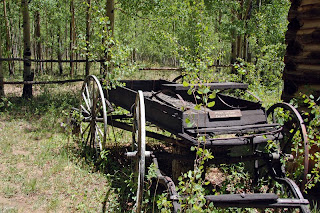 There are two stories of how Vicksburg got it's name. The first is of a few former Confederate soldiers settling in the area after the war and naming the town after the famous Civil War Battle. The second is that it was named after Mr. Vic Keller, of Keller, Peck and Co., who first platted the site. The original humble beginnings of the town were a couple of cabins, one store and 40 or so miners living nearby in tents. 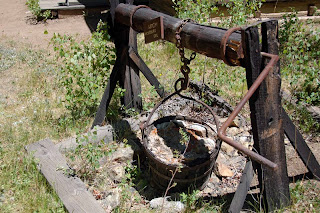 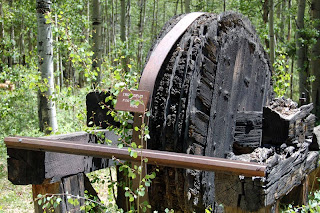 Within a short time of the formation of Vicksburg, the larger mines were flourishing.   The Abbot Mining company was working about 20 men on the Yankee Doodle mine, the Tail Halt Lode employed 30 men, and the Silver Dale employed 25 men.  The Abbot Mining Company was running a pack train from the mine to Vicksburg “on which is packed some of the richest ore that has ever had the honor to grace the back of a burro.”  The Yankee Doodle hauled about 60 tons of ore on their pack mules each day. 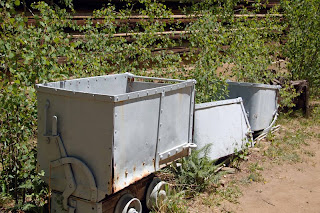 Opportunity was in abundance not only for the miners, but also for entrepreneurs.  As the winters were harsh and snow fell by the feet, many of the miners left for the winter and returned each summer.  As the miners expressed interest in staying in the area all year, many entrepreneurs recognized a great opportunity to sell supplies to these miners.  Soon there were nearly a dozen new stores selling everything from mining supplies to liquor to groceries.  A 25’ x 75’ two story billiard hall, with the upstairs area reserved for the new city hall was built as well as two hotels, saloons, a boarding house, a school, and most importantly, a post office.
(source: Colorado's Playgrounds) 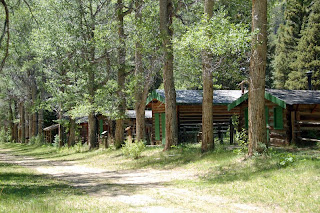 The main street of Vicksburg was named Broadway and was lined with trees bought and paid for by those residents wanting a beautifully shaded street. These small cabins are on the north side of town, and are not open to public viewing as they are still privately owned and even occupied in the summer...can you imagine a summer home in a ghost town?? 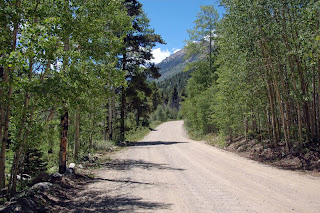 Back on up the road we went towards Winfield. The scenery through the canyon is gorgeous, the road generally following Clear Creek. There was a trailhead we stopped at for a quick pit stop (Colorado is great with providing rest areas at all popular trailheads, fishing areas, etc.) where the trail lead to the summit of  Mount Belford at 14,197 feet...a mere 4600 foot elevation change over 4 miles. Not for this casual hiker, unfortunately. 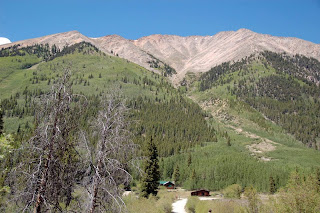 Winfield coming into view. We drove through the "town" area, and parked in a primitive camping to the north of the town. 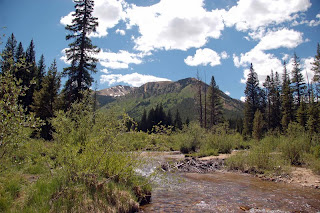 As we crossed the bridge over Clear Creek, a dip was in order for the pups! 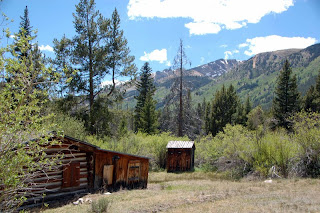 By January 1882, the canyon was full of mines.  Hundreds of miners and their families built homes in the area and the sound of drilling and dynamite were abundant.   Winfield or Lucknow, was soon established at the end of the canyon.  There were three saloons, three stores, two hotels, a boarding house, school, post office, and a church. Today, as with Vicksburg,  several of these buildings still stand, many being occupied by summer residents. In its heydey, the population is estimated to have been 1500 souls. 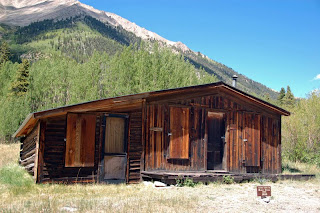 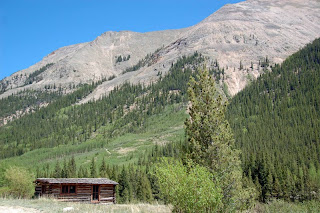 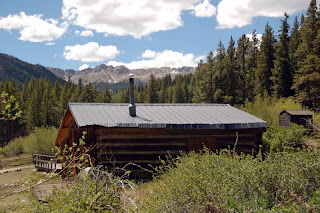 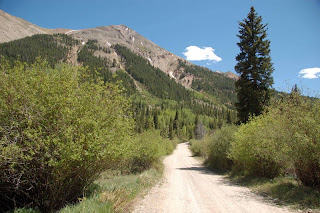 The (improved) road ended a short way past the camping area, and we headed back towards living civilization. 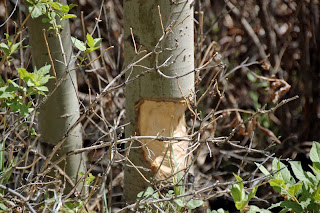 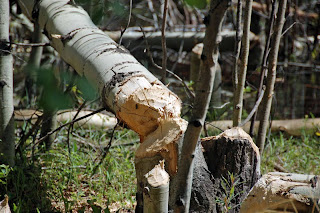 Signs of beaver activity along the road...I'd like to come back at dusk one night and try to see the beavers themselves!

It was another interesting experience we discovered by simply driving off the main road. There are so many around this area! It was back to work for the weekend, and we were very busy, but Tuesday came and we went off on our three day "weekend" to visit a place we've always wanted to go...Rocky Mountain National Park! I have a ton of pictures to go through, and we're very busy this weekend (campground is almost full to capacity, we're starting to use the overflow sites!) so please be patient, and I'll get some great pictures put up soon for your viewing pleasure! Just a hint for anticipation....elk, moose and marmots...oh my!