This week on our days off we decided to lay low, stay close to home and keep the budget in check, especially as we plan to spend our next three days off in a row visiting Rocky Mountain National Park. Monday had been a beautiful sunny day, and we had plans on Tuesday to have the truck serviced and grocery shopping for the week. So I got out the trails guide, made some sandwiches, and off we went to try the Lakeside to InterLaken Trail up by Twin Lakes, about a half hour north of us. The trail starts out on the Colorado Trail trailhead, and follows the lake's shoreline west to an abandoned "ghost" resort, InterLaken. 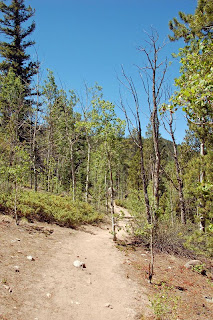 Starting out on the trail. It is a beautiful day, but believe me, it is SO dry around here you literally kick up puffs of dirt as you walk along. 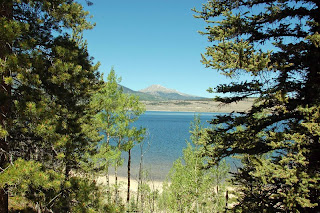 Twin Lakes is beautiful. They are naturally formed glacial lakes surrounded by mountains over 13,000 feet
high. At the turn of the century the lakes were enlarged into a reservoir by the construction of the original Twin Lakes Dam. 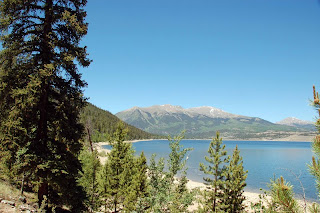 The trail followed the shoreline, allowing the dogs to dash down to the beach and have a good cooling soak in the lake. I believe that is Mount Elbert in the distance, Colorado's highest peak at 14. 433 feet. 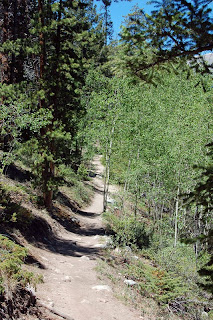 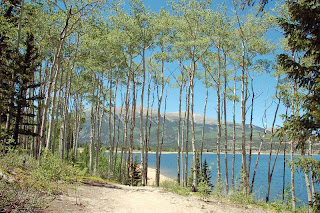 The trail through the trees was so pretty. 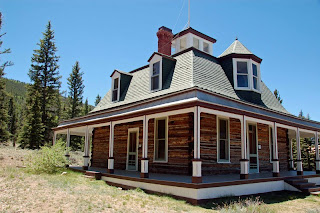 At 2.4 miles, we made it to Dexter House. What is Dexter House? It was the private residence of the owner of the InterLaken Resort, a one-time rival of the famous Broadmoor Resort as one of Colorado's most luxurious properties. InterLaken was established in 1879 as a popular summer resort for tourists who rode the train to Twin Lakes and then took a stage to the resort.
Dexter's private residence was constructed in the mid 1890's, and designed to resemble a New England captain's home, reflecting his nautical background. As with his resort, he spared no expense in the construction, the interior trimmed with imported wood, lavish rugs and decorations. 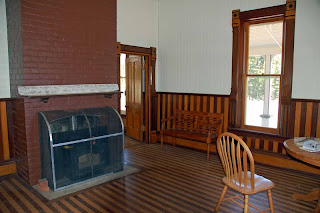 Some of the beautiful woodwork. The building is being restored slowly by the Bureau of Reclamation, and the site is managed by the U.S. Forest Service. 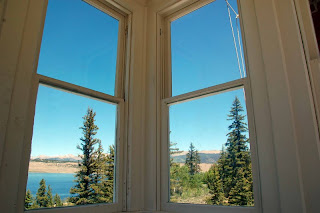 I climbed up the very steep and narrow staircase to the glass-enclosed cupola to take in the view. 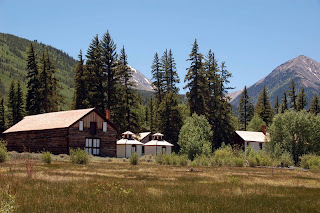 Another .2 miles down the trail is the remains of the resort itself 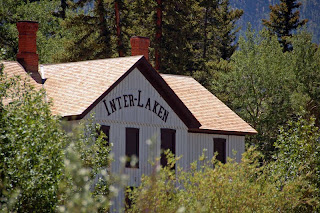 Sadly, the resort fell slowly out of favor shortly after the turn of the century when the dam was constructed. People associated shallow stagnant water at the end of the lake with mosquitoes and malaria, and stopped coming. Eventually the property was abandoned and fell into disrepair, until 1979 when the Bureau of Reclamation took over the property and began to restore the buildings that were not beyond repair. 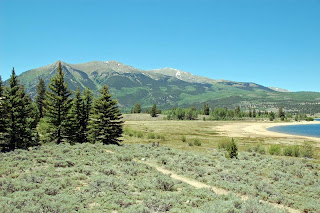 The property was so nice, I can imagine people coming out and enjoying the fishing, swimming, hiking and  other activities in the summer. It was so calm and peaceful here, and the only folks we met were a family going for a bike ride. As always, when we strike up a conversation, we are invariably asked where we are from (the New York accent, you know), and when we explain our lifestyle, we are besieged by questions, and best wishes for our journey. It's awesome!

The hike back was just a return trip along the path, seeing the views from the other direction :-). When all was said and done, we did about 5.25 miles, and my legs were telling me I did :-). We enjoyed our lunch with a great view at the lakeside, and headed back to the campground in the late afternoon. Al had tried some fishing, but the wind had kicked up considerably by late afternoon, and it did not go very well. 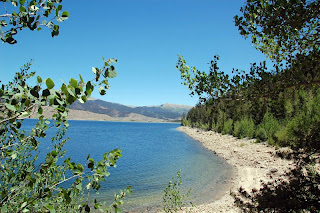 So, we had a very enjoyable hike to see some interesting historical buildings. It was a good way to spend a day off!