Tuesday we headed out for our three days off! We had a packed schedule planned, and got the trucked packed up and ready to go by 9AM. We headed south on Hwy. 285, over Poncha Pass and towards Del Norte, which would be our turning point onto Hwy. 160 west. The scenery was similar to what we encountered on our drive here in April, as 285 parallels Rt. 17 most of the way. Everything was quite a bit greener, though! Once on 160 heading west, we drove until reaching South Fork, where we stopped to stretch our legs for a few minutes. Funny thing, I've had people check in at the campground who have told me that they "drove and drove miles on roads with nothing around to reach here"...I guess I know what they mean! If you're looking for McDonald's, or fancy service areas, you aren't going to find them here! Several towns are of the "don't blink or you'll miss it" variety :-).

From South Fork we resumed our trek west, and prepared for the crossing at Wolf Creek Pass. I've read a lot about this pass on the RV forums, with some folks claiming it's the worst pass in Colorado, and others extolling it's beauty and down-playing the knuckle-biting qualities. Well, I'm falling on the side of exceptional beauty, and it's not so bad :-). 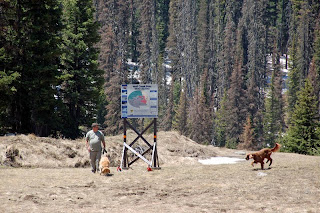 The top of the pass...the sign shows all the snowmobile trails available here. The trail was quite wet and mucky, however, so we didn't go too far down it. 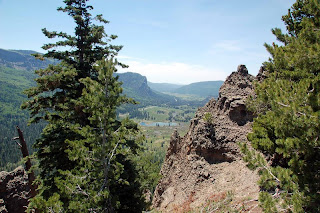 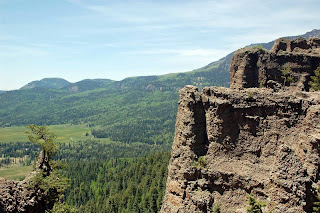 Views from an overlook on the western side of the pass.

Close to the bottom of the pass is a waterfall called Treasure Falls. As the story goes...." in the late 1700's, an expedition of 300 Frenchmen secretly entered the San Juan Mountains in search of gold in what was then Spanish territory.Over a period of years they encountered disease, brutal winters, and battles with the Ute Indians. Of the 300 Frenchmen, only two returned to Leavenworth, Kansas. They told an intriguing tale of about how the leaders of the expedition had cached a fortune in gold near Treasure Mountain. Many have looked for the gold, but failed to locate the cache. Most of the clues have been lost or destroyed...and the lost French gold remains the Legend of Treasure Mountain." 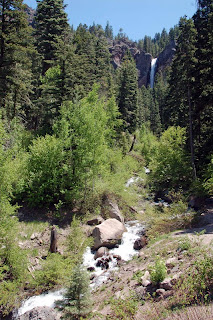 The view of Treasure Falls from the overlook. There's a short, 1/4 mile trail leading to a bridge that crosses the falls at the bottom, and then climbs to an overlook called "Misty Overlook". 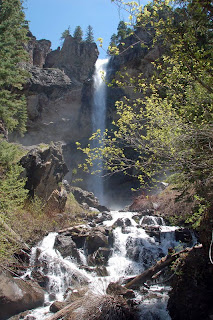 After huffing and puffing our way up, we came to the bridge :-). 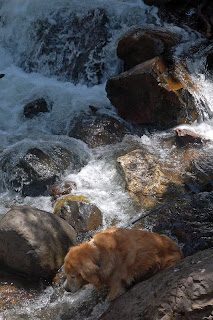 Chelsea went right in to cool off! 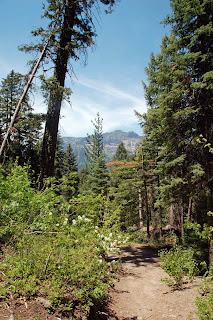 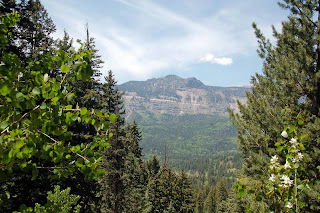 The trail and views on the way to the falls. 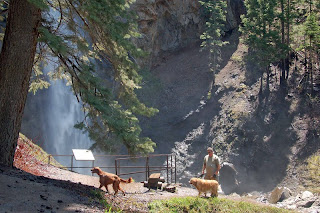 Misty Overlook...it was way to wet for me to take my camera in there so this is as close as you get :-) 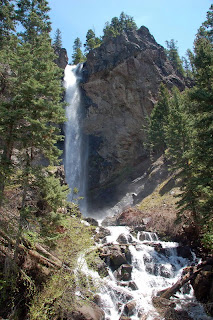 Final view of the falls as we headed down.

We came to Pagosa Springs after coming down off the pass, and decided to stop there for a quick sandwich at The Malt Shop, an old-fashioned burger joint that had outside seating..something we always look for with the dogs :-). The grilled cheese sandwiches were good, made on sourdough bread. Just enough to keep us until dinner. At the town of Bayfield, we turned off Hwy 160 onto CR 105, which took us up to our cabin for the next couple of nights on Lake Vallecito. We had booked a small cabin at Lone Wolf Lodge, a dog-friendly spot in Lake Vallecito. I was looking for someplace to stay near Durango, where the kids had daycare set up for the next day, when we were going to Mesa Verde National Park. Sometimes, you just need to go someplace where the pups are not welcome, so thankfully there's day care services available. I keep thinking this would be a service that National Parks could offer and make some money at, as surely we are not the only folks who struggle with where to safely put our "furkids" for the day while we visit these parks. Anyway, after we checked in and put our stuff away, it was time to head back out, as we had been invited to dinner by some old friends from back in New York. They had moved out here almost ten years ago, and got in touch with us when they read we would be in the Durango area. So we had a lovely dinner with Kevin and his dad, talking about how things were back east and gathering much information about where to go in Colorado. So a great big thank you for a great evening to Kevin and his dad...we appreciated it very much! And yes, we did find our way off of the mountain, although it did take two loops to do it :-).

Next up will be Mesa Verde National Park, with a warning that there will be a lot of pictures!