It's already Friday? Where does the time go? Sunday we worked the morning shift, which for Al was cleaning up sites as guests checked out, and in the office was mainly cleaning and organizing. Not too many phone reservations come in on Sunday mornings. After lunch, the dogs were antsy having been relaxing for several hours, so we took a hike on one of the close trails listed in our mellow Mountain Trails book, The Barbara Whipple Trail. The weather was threatening rain, so I didn't bring my camera with us on this walk. We will be doing it again, though, as it is so close by, and the views were very nice from the ridge of the trail. Monday was another work morning, but we had an event that we weren't expecting: snow! 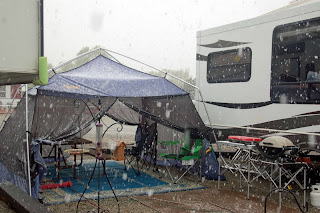 It snowed all day, pretty hard at times, but fortunately for us it didn't accumulate on the ground, just once we had to go outside and bump the snow of the roof of the screen room. It's bad enough the wind wants to carry it away, but we don't want it collapsing under the snow! Being so nasty and cold outside, we had a good excuse to stay inside for the afternoon and watch a movie. I had been wanting to see "The Girl With the Dragon Tattoo", so we picked it up from Redbox. The book was better, but the movie was pretty good as well. It would have been interesting to see the Swedish version of the movie, but I really can't make Al suffer through English subtitles :-).

Al had to take some video of the snow!

On Tuesday morning, when the cloud cover cleared somewhat, we could see a lot more snow had fallen at the higher elevations, and the mountain peaks are fully covered in white, almost more than when we arrived here three weeks ago. That should help the water situation around here.

Wednesday was a beautiful warm sunny day, and happily was also a day off for us! After our weekly staff meeting at 9, we packed up the cameras, maps, water and dogs into the truck and took off towards Canon City to visit Royal Gorge Bridge and Park. Royal George is a breath-taking gorge formed over the last three million years by the Arkansas River, one of America's longest rivers. One of the world's highest suspension bridges was built here in 1929, spanning a width of a quarter mile across the gorge, hanging 956 feet above the Arkansas River. 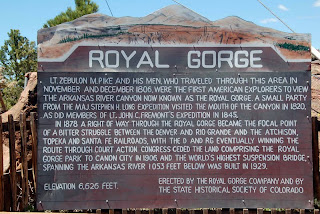 Information plaque at the north side of the bridge. We're running across Zebulin Pike's name quite often in this area. 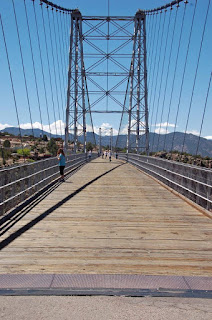 The bridge. We walked across it to the south rim of the gorge, but you can also drive your vehicle across. As you walked, you could feel the bridge bouncing ever so slightly under your feet. 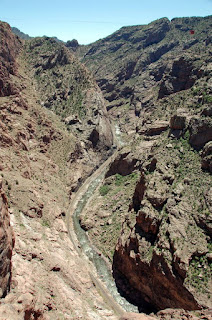 The Arkansas River flowing to the east 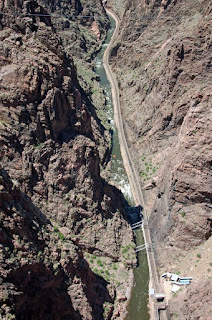 Flowing to the west...for some perspective on how far down the river is from the bridge, just above the rapid area in the middle of the picture is a small red dot...this is a raft full of folks riding down the river. They looked smaller than ants! 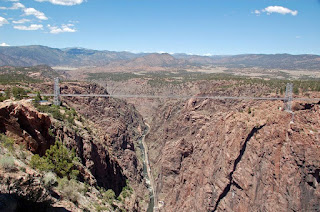 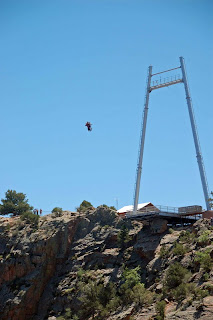 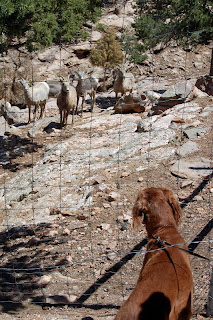 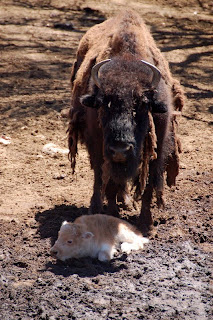 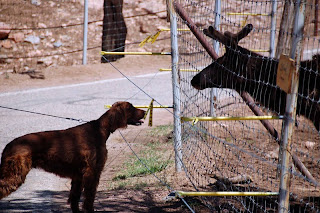 There is a small native wildlife exhibit area here...the bighorn sheep and elk were fascinated with Casey, as he was with them! 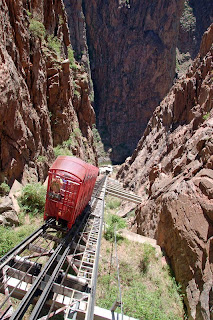 Al took a ride to the bottom of the gorge on the incline tram. One of the world's steepest incline railways, its 1550 feet long at 100% grade and a 45-degree angle. It moves at 3mph and takes 5.5 minutes to travel from top to bottom. 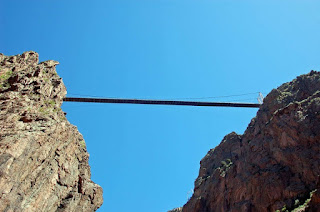 Bridge view from the bottom of the gorge 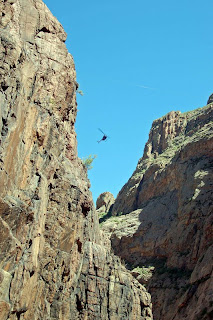 Rescue drills by rock climbing teams and helicopter were going on during the afternoon. 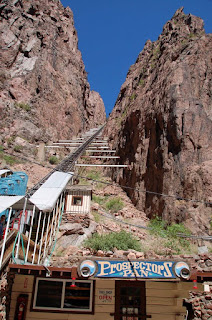 The incline track as viewed from the bottom of the gorge 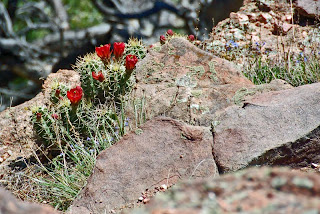 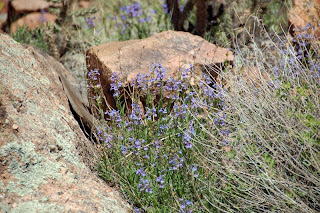 Wildflowers started to show some color.

It was an enjoyable afternoon. Even though several of the food booths and shops were not open yet, it was nice to visit a tourist area before the season begins, while it is quiet. It was nice that they allow dogs to visit in the park, they are just not allowed on any of the rides or in the buildings. They do have very nice kennels where you can leave them if you wish to go on the rides, the kennels are clean and shaded and you have the key to the lock so no-one else can get to them. There is also a nice big doggie water bowl outside the tee shirt shop on the south side, which we stopped at both on the way in and on the way out.

Thursday I took quite a few reservations for the coming months, and fielded several calls. One thing is amazing to me, and it's quite odd to me, anyway, as I was always the one making plans and reservations for our family. I have a lot of men who call, to "make a reservation", then keep me on the phone for a long time, asking all sorts of questions about particular sites, location, etc. Then, instead of making a reservation, tell me they " have to check with my wife" before making a decision. Now Al says he just always lets me do it, cutting out the middleman (him!).  How do you all go about making reservations...if you do?
Another funny thing yesterday, Al was cleaning the checked-out sites for the day, and one site was literally covered in confetti. Not an easy thing to clean on a gravel site without displacing the gravel! Why would anyone spray confetti all over a campsite??

So far they are calling for scattered showers and thunderstorms all weekend. We do have several campers here, especially creek-side (the most popular sites), so we should be busy, and hopefully be able to get some walks in in between raindrops.

Happy Mother's Day to everyone, and Happy Birthday to Al's mom....Big Ma!