Our arrival in Torrey Utah last week introduced us early to the outstanding beauty of the area. As you drive down scenic highway 24 you are taken right through 14 miles of Capitol Reef National Park, noted as one of "the best National Parks you've never visited". As if the drive on Hwy 24 wasn't pretty enough after you get to Hanksville, just before you reach the National Park section there's a sign that states "Scenic Views next 14 miles"; seriously, like the view wasn't already scenic??

We stayed at Thousand Lakes RV Park at the west end of Torrey. We've read of a few other bloggers staying here when in the area, and we enjoyed this campground as well. While we did not avail ourselves of the myriad of services available here, it was clean, quiet and very friendly. Dry and dusty, but what else can you expect? There area a few patches of grass, though, and a very nice pool if you are so inclined. 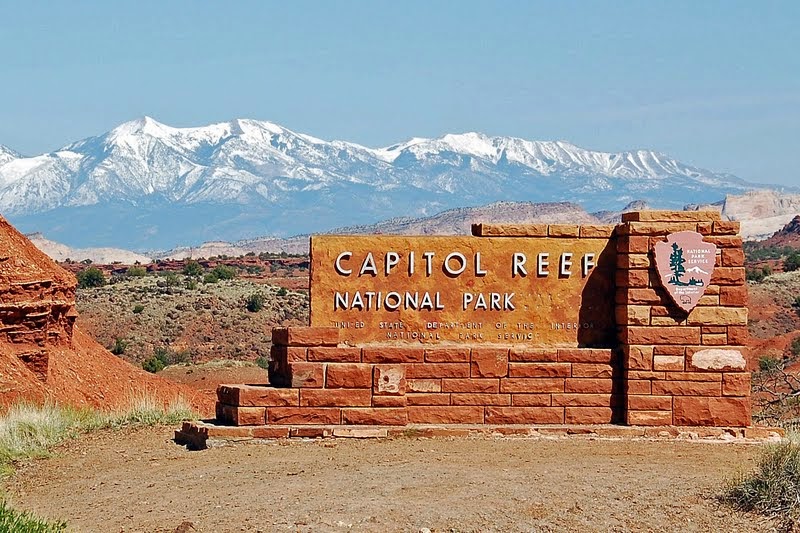 Touring Capitol Reef National Park was our first day's activity. A stop at the Visitor Center gave us the required maps and information needed for not just that day but the next few days.We also watched the short movie which gave a nice overview of the park. We then decided to do the 16 mile long scenic drive, then visit the different overlook areas in the park. 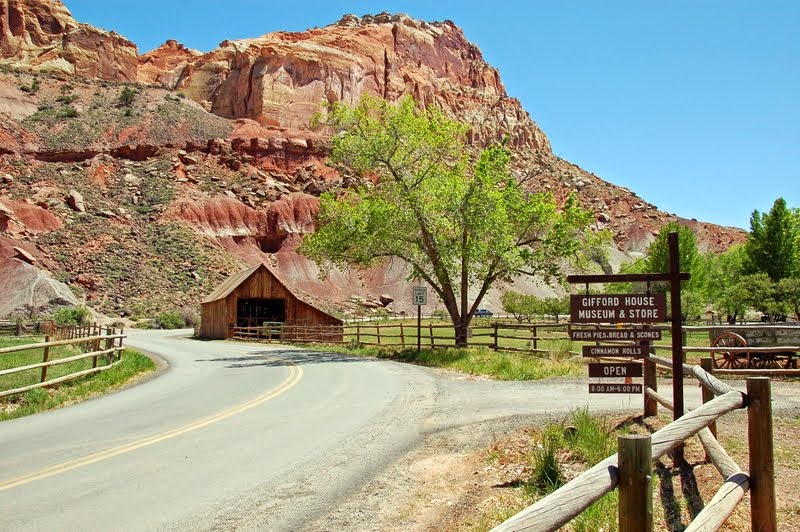 The scenic drive starts out behind the Visitor Center, and goes through part of the Historic Fruita area. Fruita was settled by the Latter-day Saints (Mormons) beginning in 1880. Fruita is situated at the confluence of Sulpher Creek and the Fremont River, both perennial water sources. The mild temperature in the area and the continuous water source made the location ideal for growing fruit trees, of all things. Acres of orchards were planted and thrived, right up to modern times. There are still 15 orchards in the park containing cherry, peach, pear, apple, plum, mulberry, almond and walnut trees. The National Park continues to maintain these orchards, and guests are invited to stroll the orchards and even sample fruit in season. 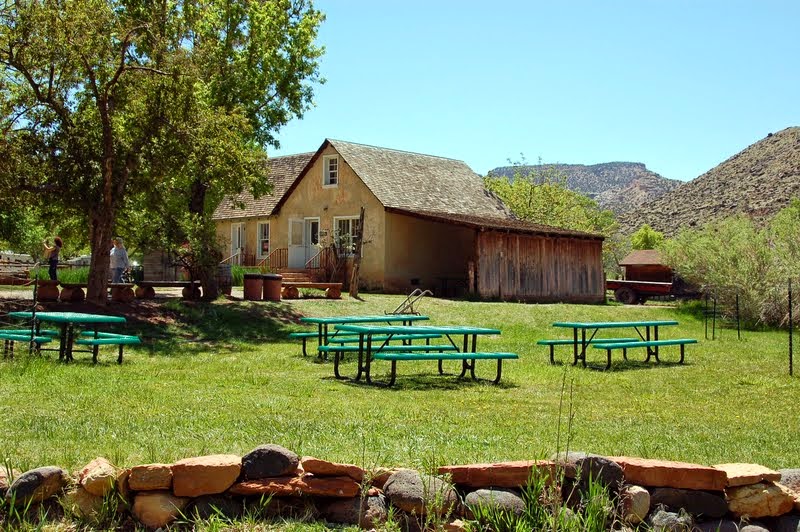 The Gifford Homestead has been renovated to contain a small museum and gift shop, featuring baked goods of the pioneer era. I can personally attest that the fruit pies (specifically peach) made from the harvest of the orchards are outstanding!! 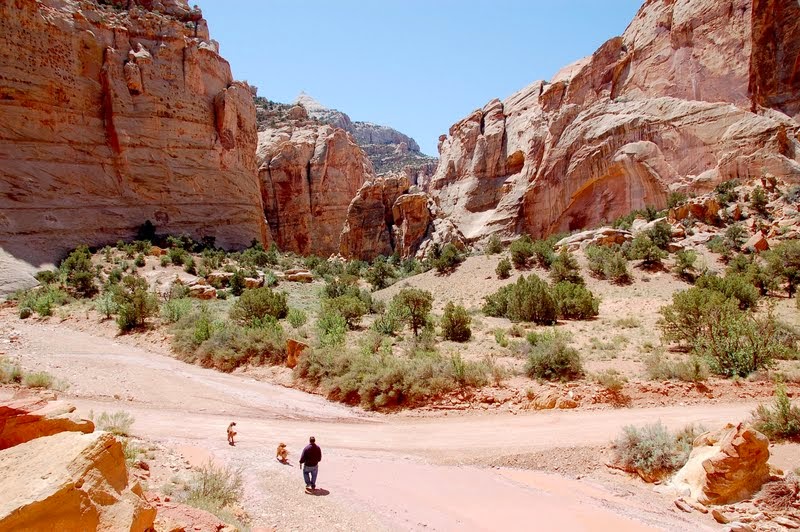 We have been introduced to a term we've never heard until we arrived at Capitol Reef N.P.; Waterpocket Fold. The scenic road follows the western face of the Waterpocket Fold, and is a portion of the original road first used by Native Americans, then developed into a wagon road by the Mormon settlers around 1884. 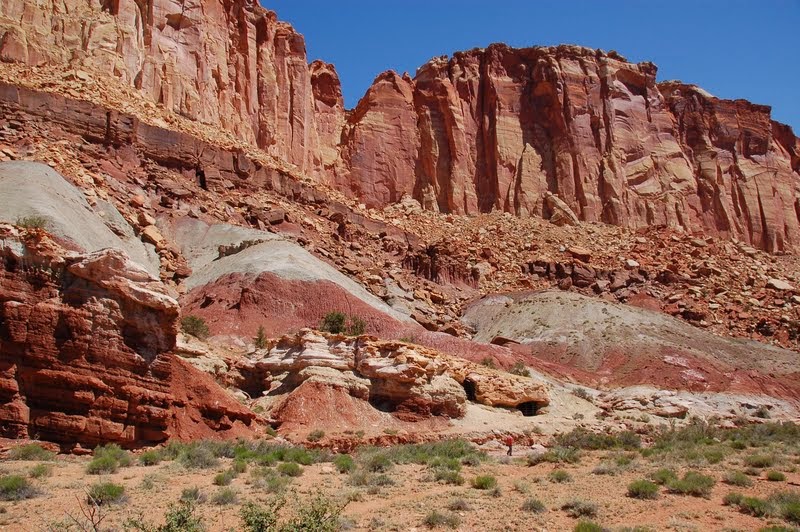 Ok what is a "waterpocket fold"? It's a giant buckle in the Earth's crust, over 100 miles long, created over 65 million years ago. Many layers of originally horizontal sedimentary rock make up the fold. The layers formed from sediments deposited over hundreds of millions of years in seas, tidal flats deserts and other ancient environments. Regional "lifting" of the deep fault occurred, with the west side of the fold being lifted more than 7,000 feet higher than the east side of the fold. Waterpockets are the basins that form in many of the sandstone layers as they are eroded by water. These basins are common throughout the fold giving the reason behind the name Waterpocket Fold. Here is a good view of the Fold from the Strike Valley Overlook (we tried to get there but needed a high clearance vehicle, drat!). 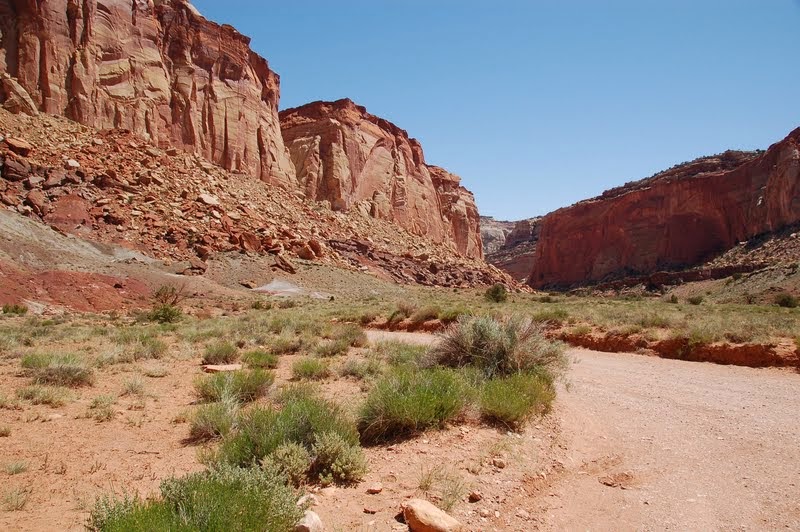 There are two spur dirt roads off the scenic drive which can be taken, and lead to trails at the end of each canyon for further exploration. However, as dogs are still being discriminated against in National Parks, we had to leave the hiking for a different day. 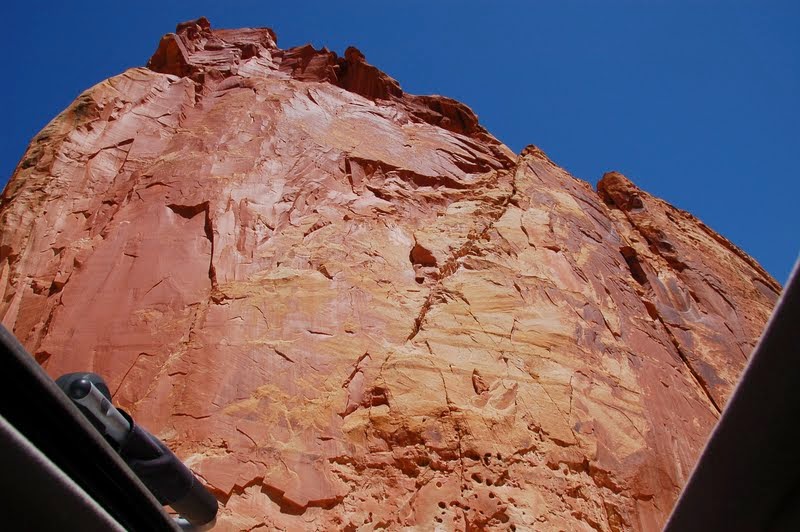 This is looking up at the cliff walls from inside our SUV. It's really up there! 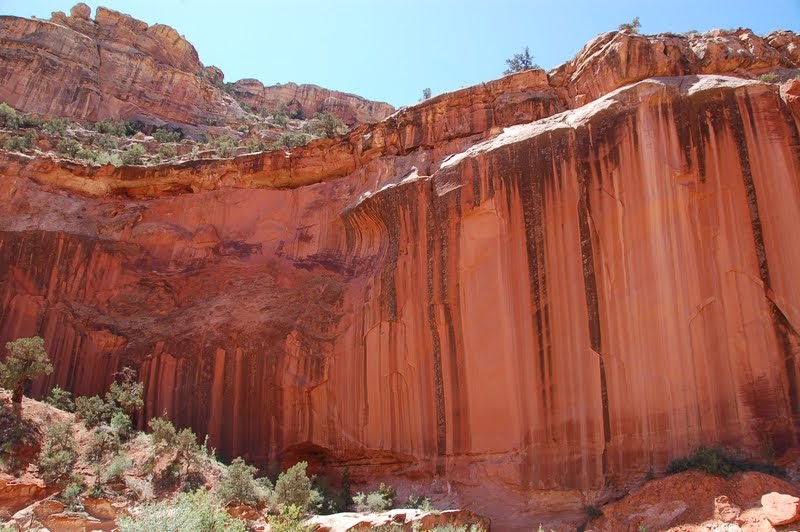 Desert "varnish" dripping down the cliffs. 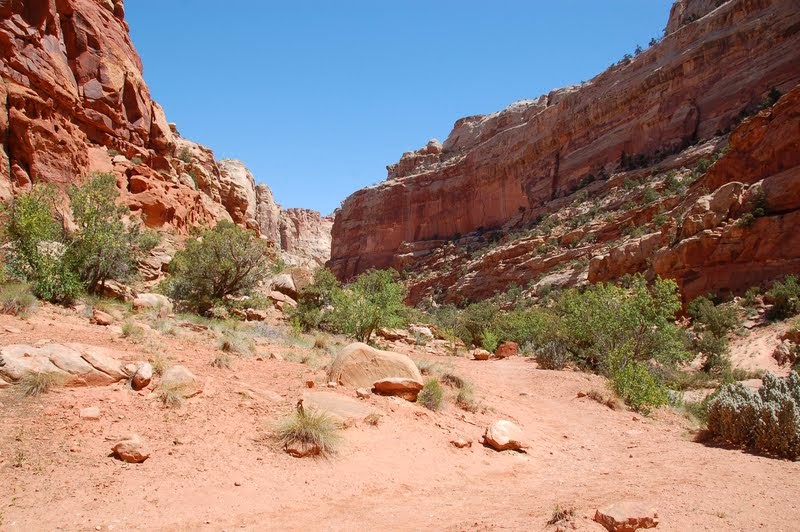 These last few pictures were taken in the Grand Wash area of the scenic drive, the first spur road. 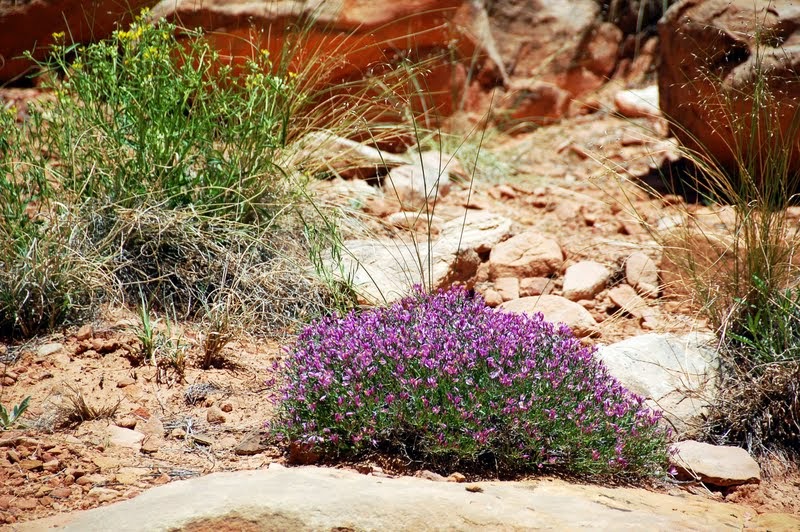 There's been a lot of color in the desert surprising me. All kinds of flowers, in blues, yellows, oranges and white. 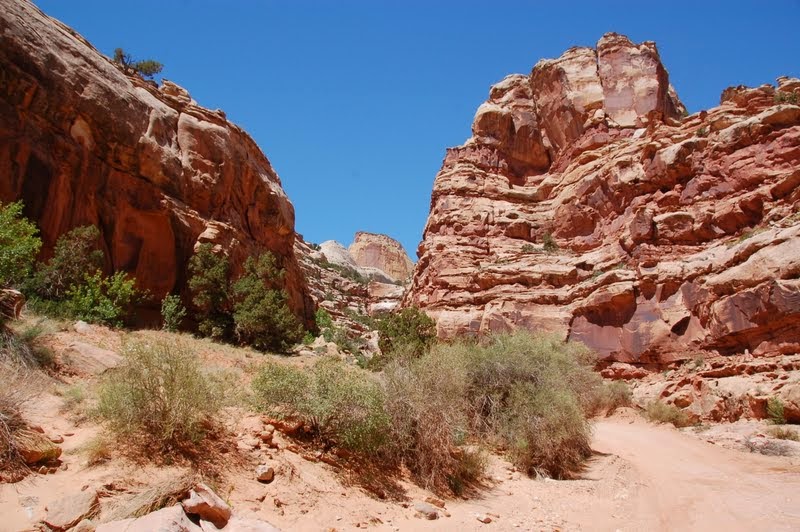 We then headed to the end of the drive, and drove into the Capitol Gorge spur road. I was looking for Bighorn Sheep here, but no luck. 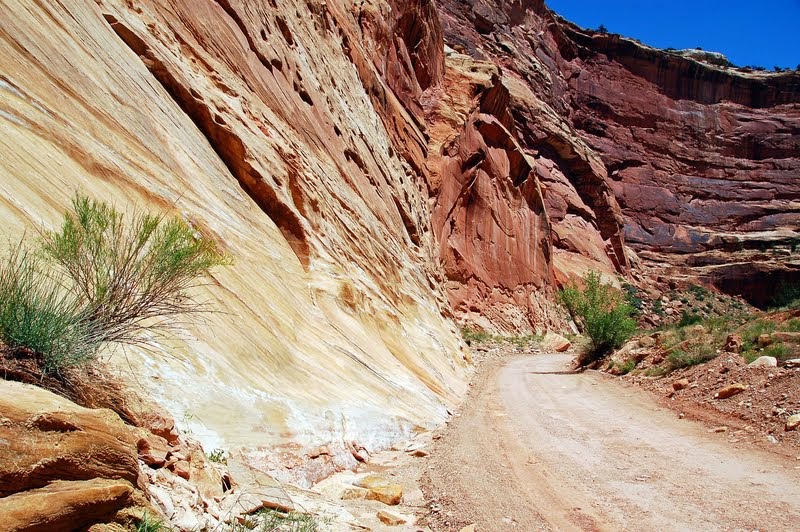 The constantly changing colors and designs of the canyon walls are striking. 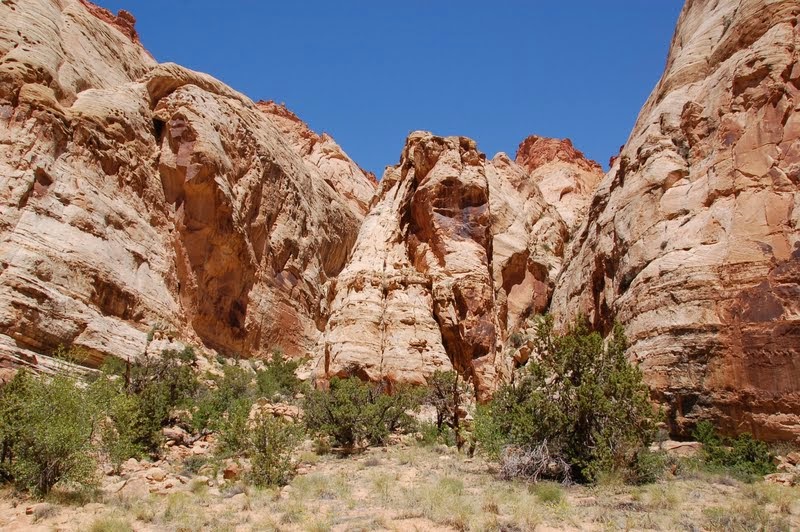 There was a picnic pavilion at the end of the spur road, which seemed like a good place to stop and have lunch. We hung out with some other dog owners who couldn't walk the trail to an area called "The Tanks". natural cavities in the sandstone that capture rainwater similar to the pockets for which the Fold is named. 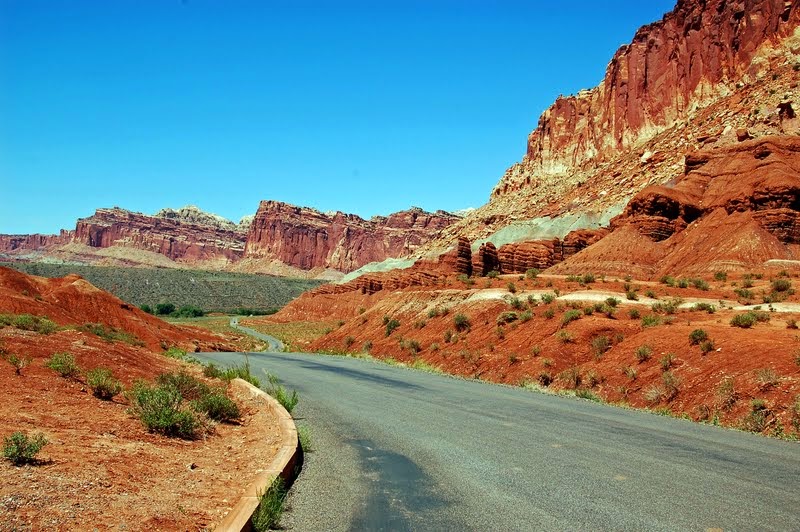 We headed back down the scenic drive, and got back on Hwy 24 to hit the overlook areas. The brochures said to allow 90 minutes for the scenic drive; I think we spent 3 hours!! 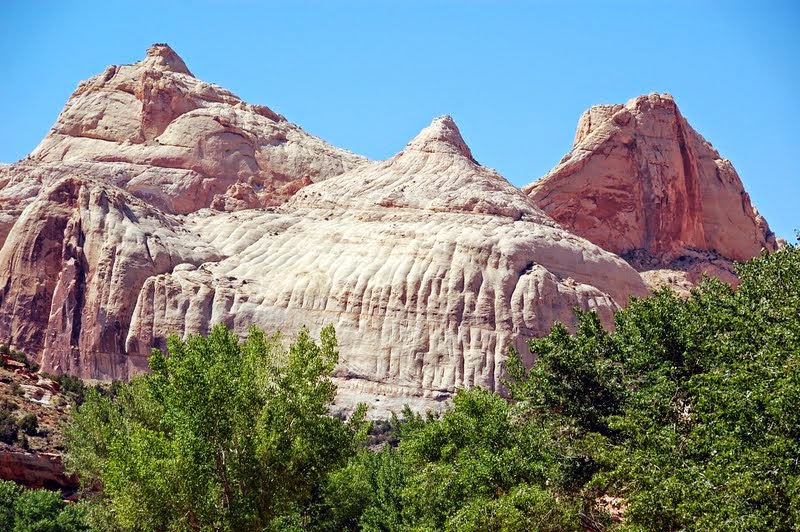 The Navajo Dome, one of the prominent white domes featured in Capitol Reef N.P., is said to be the reason behind the "Capitol" portion of the Park's name. It is said that it reminded the early explorers of Washington, DC's Capitol building. 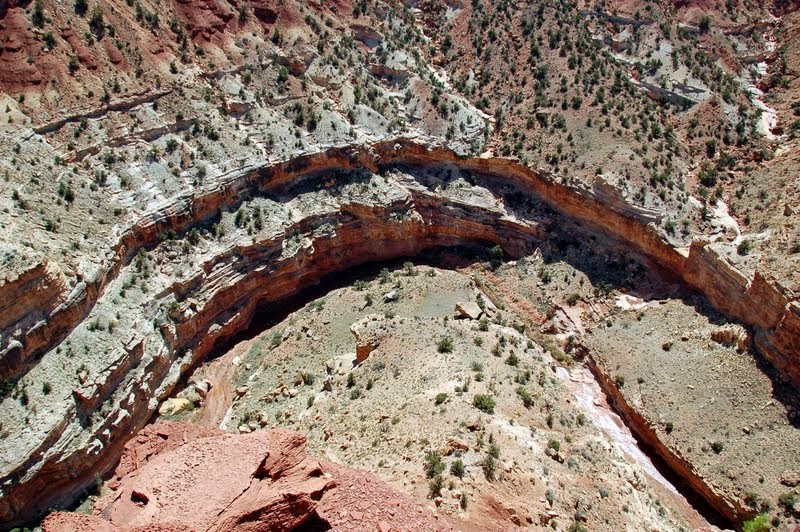 Goosenecks Overlook. Sulpher Creek flows through here, at one time being a low-lying plain area. As the fold began buckling, and the land warped upward, the stream was trapped in it's channel. The water began slicing through the sandstone creating an even deeper and curving channel. Where channels loop around close it becomes what is known as a gooseneck. 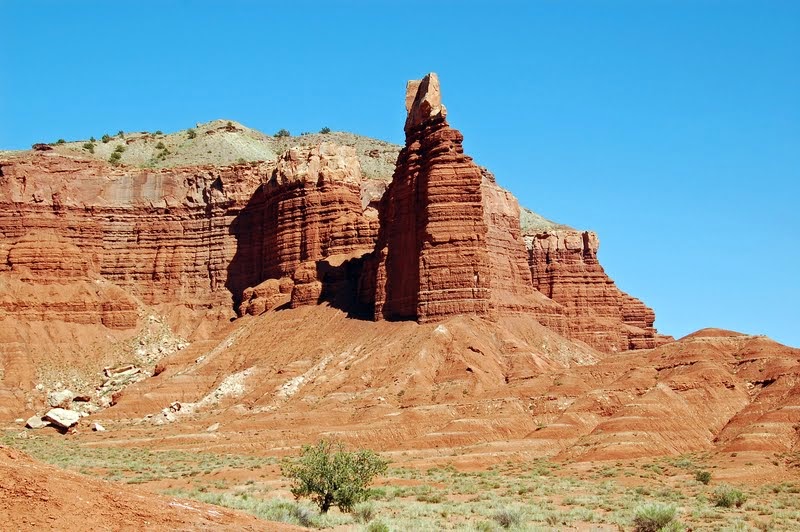 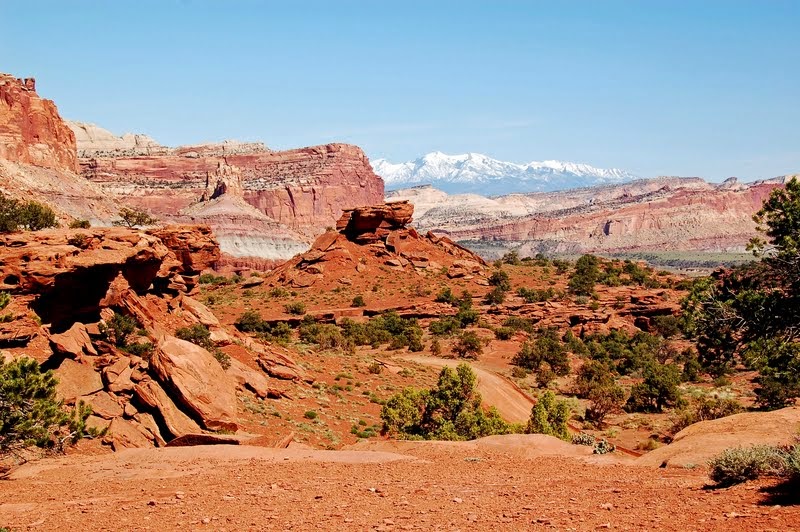 Inspiration Point...yeah, I'd say it's inspiring!

It was a very good start to our stay in Torrey. Beautiful day, beautiful scenery, and more adventures to come.
Posted by Al and Karen at 11:36 PM