"Before there were any Indians, the Legend People, To-when-an-ung-wa, lived in that place. There were many of them. They were of many kinds-birds, animals, lizards, and such things-- but they looked like people........For some reason, the Legend People in that place were bad. Because they were bad, Coyote turned them all into rocks. You can see them in that place now; all turned into rocks; some standing in rows, some sitting down, some holding onto others. You can see their faces, with paint on them just as they were before they became rocks.....This is the story the people tell." 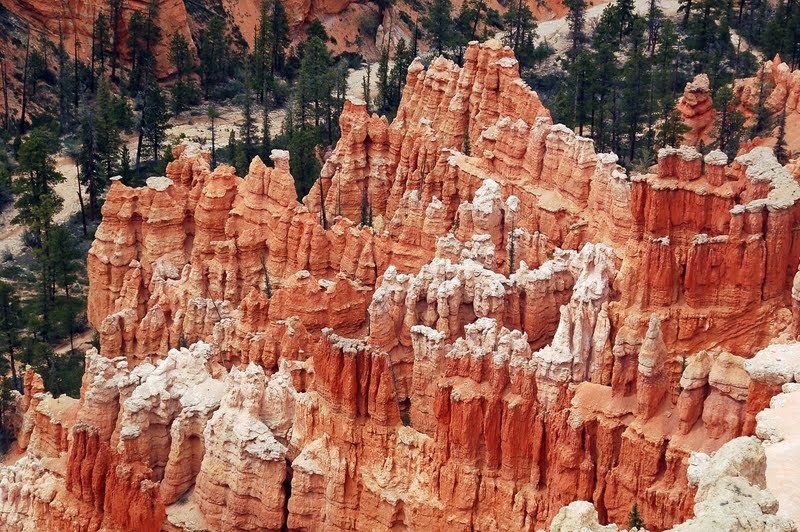 Bryce Canyon National Park was simply amazing. I feel I need a thesaurus as I have been overusing words like amazing, beautiful, glorious and wonderful. But it truly is.

It was a three hour drive to Bryce from our campground, but we decided it was going to be worth the six hour round trip. Besides, the entire drive would take place on National Scenic Highway 12, by all rights a destination unto itself. So we got up early, and headed on down the road. The ride was awesome, and the time flew right by. We stopped at the Escalante Interagency Visitor Center, for a rest break, stamp our passport book for Grand Staircase-Escalante National Monument (remember we hiked Calf Creek Falls so we did participate in an activity in the area), and there's also a great information booklet for Highway 12 that I picked up. Just a little under three hours we pulled into Bryce Canyon Village at the entrance to the National Park. This is where the famous Ruby's Inn Bryce Canyon is located, and I believe almost everything in the area belongs to Ruby!
We stopped at the Visitor's Center to collect maps, information and create a game plan for our visit. There would be no hiking this trip once again, as we had the dogs with us (way too long a time for us to leave them by themselves), so we wanted to see what we could do and the best way  to see the high points. The road through the park is 18 miles long, with most of the overlooks on the left hand side going down to the end. It was suggested the best way to go was to drive all the way to the end, Rainbow Point, and then work your way back so you would always be turning to your right, rather than across traffic. So off we went to Rainbow Point. 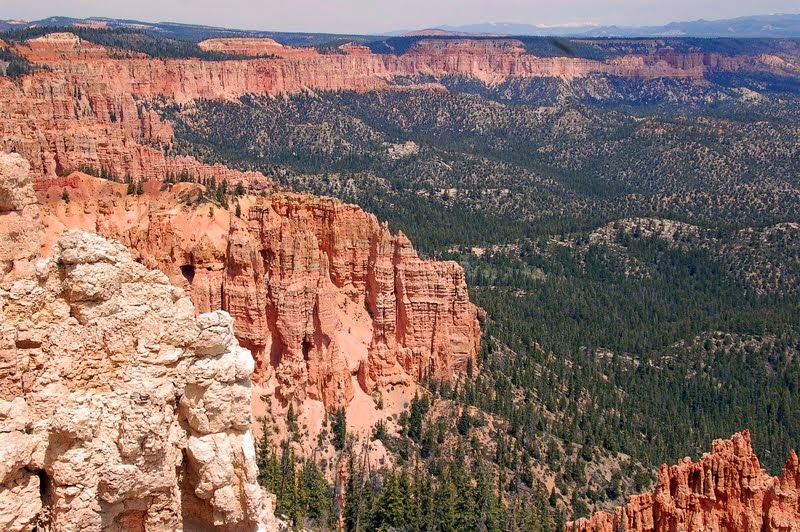 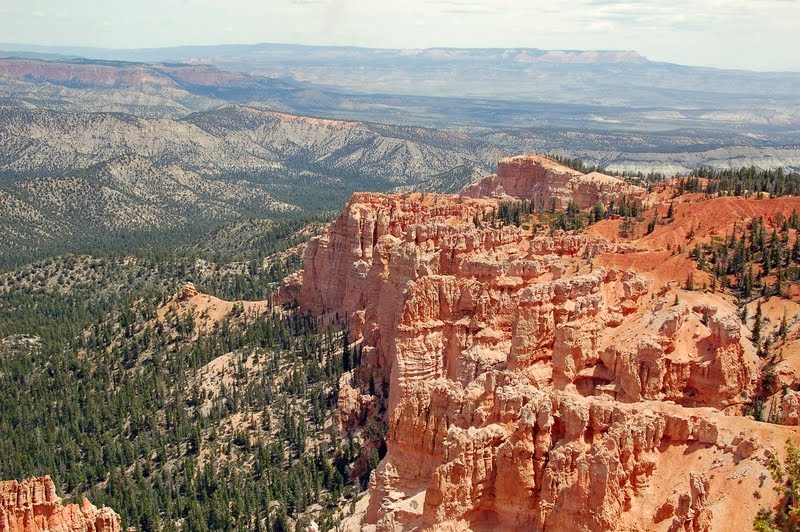 This is our first view at Rainbow Point. It's interesting to note that Bryce Canyon is not actually a canyon at all. It has no great river running through it to carve the landscape, but instead is a series of amphitheaters carved into the edge of the Paunsegunt Plateau. In these natural amphitheaters are the beautifully carved and colorful erosional forms called "hoodoos" which makes Bryce unique. 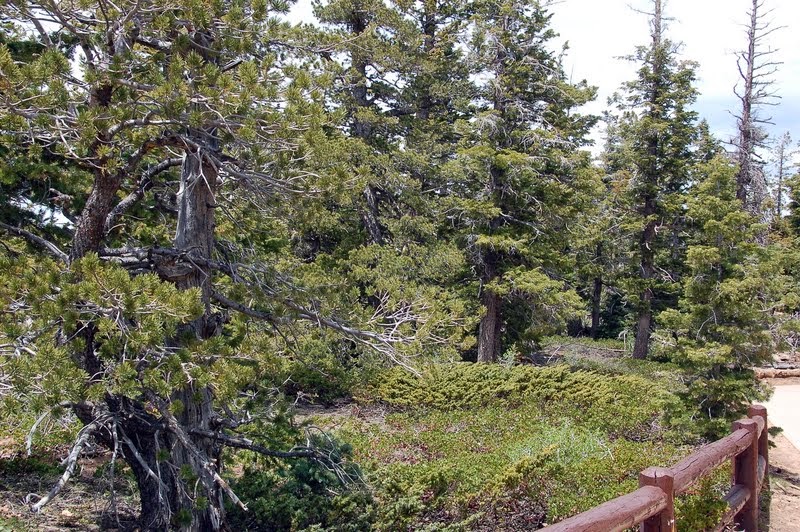 On Rainbow Point is a grouping of Bristlecone Pine trees, the oldest single living organisms known, with some individual tree being more than 5,000 years old! The Bruce Canyon bristlecones are mere youngsters, estimated at about 1,800 years old. Can you imagine?? 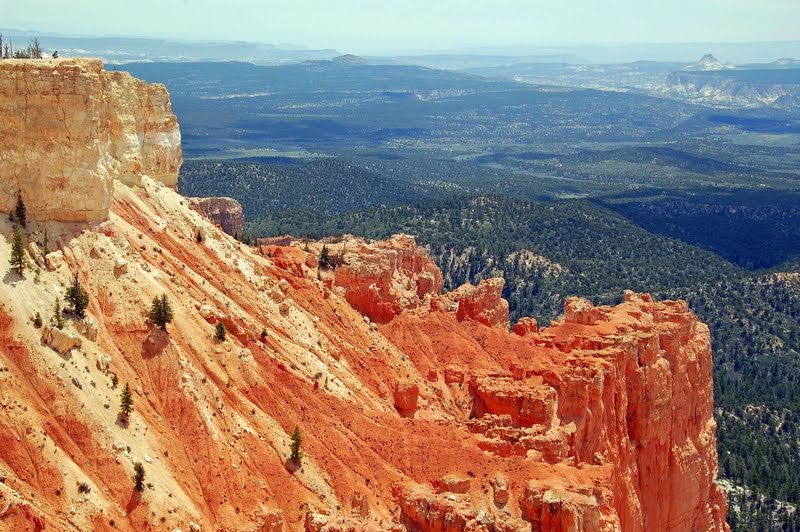 Yovimpa Point: the Pink Cliffs. These are considered the "top step" of the Grand Staircase. You can read about this staircase here. 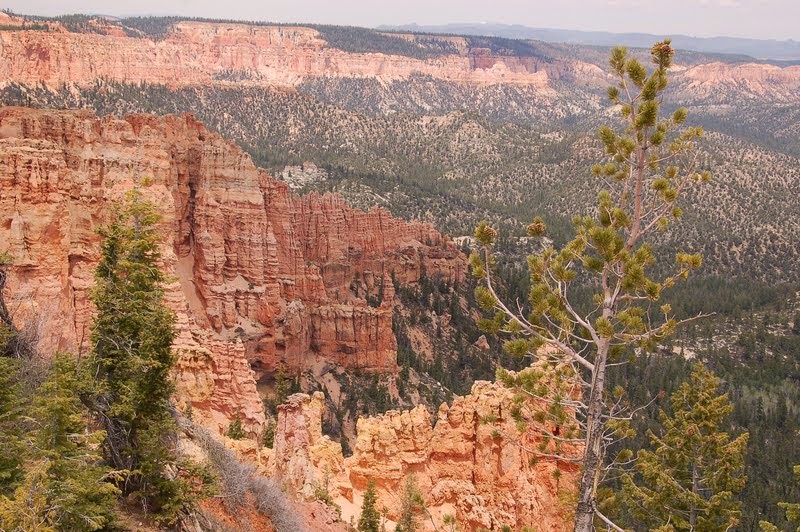 Ponderosa Canyon. An excerpt from The Auto Guide I picked up:
1916: a conversation between cowboy Claude Sudweeks and new settler Ruby Syrett:
Claude:"Ever seen Bryce's Canyon?"
Ruby:"No, what is it?"
Claude:"Oh, just a hole in the ground--but you should see it".
Before becoming too critical of the often casual attitude toward Bryce Canyon by many of its settlers, put on their shoes for a moment. "Our grandparents were thrilled with its beauty...but they could do little about it. They were too busy trying to make a livelihood for their families. There were no roads,just poor trails. Their wagons were worn out, their horses or ox teams were poor and unable to make many trips, save for the bare necessities." 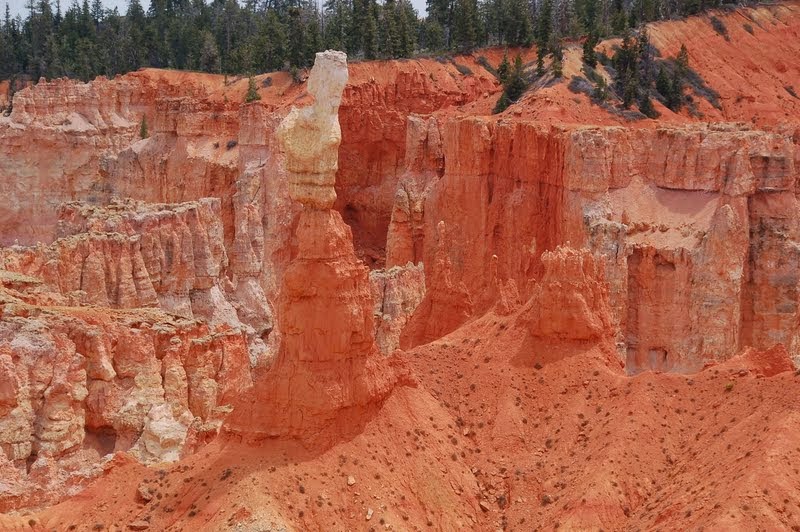 Agua Canyon: do you see a bunny? 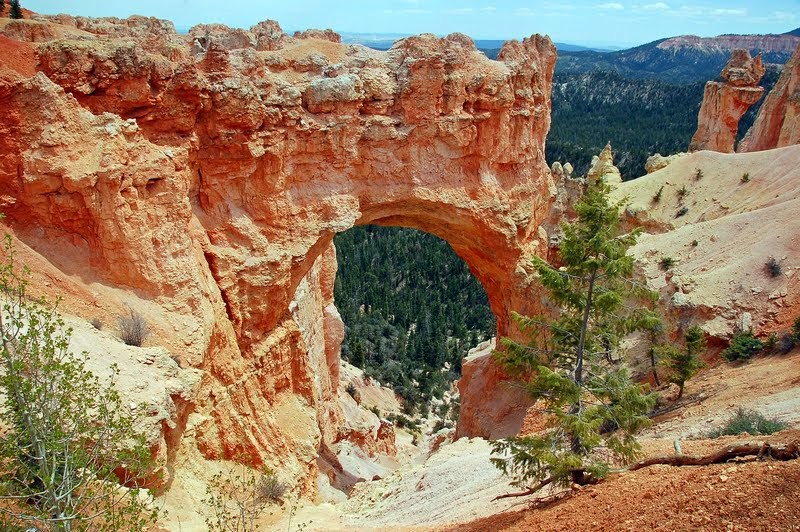 Natural Bridge. Despite the name, the 85 foot span seen from Natural Bridge viewpoint is believed to have formed without the aid of running water, making it an arch, not a bridge. Runoff water from the adjacent rim eroded the softer sandstone under the harder sediment above, creating a gully and the arch above. 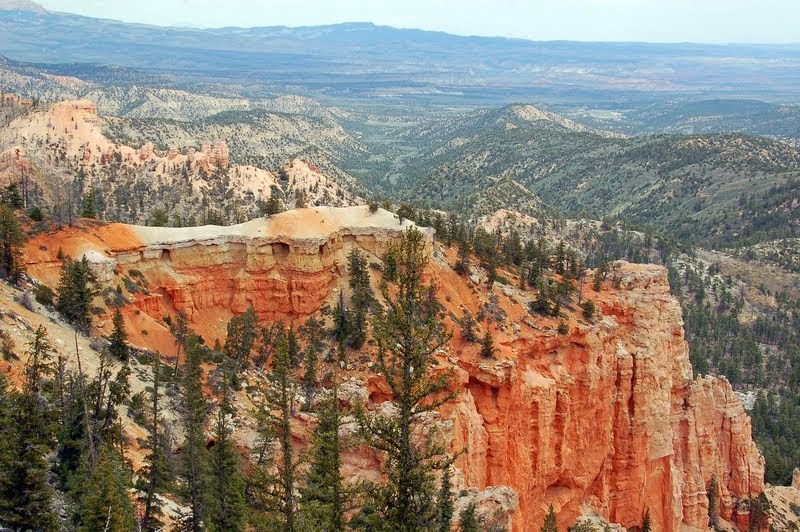 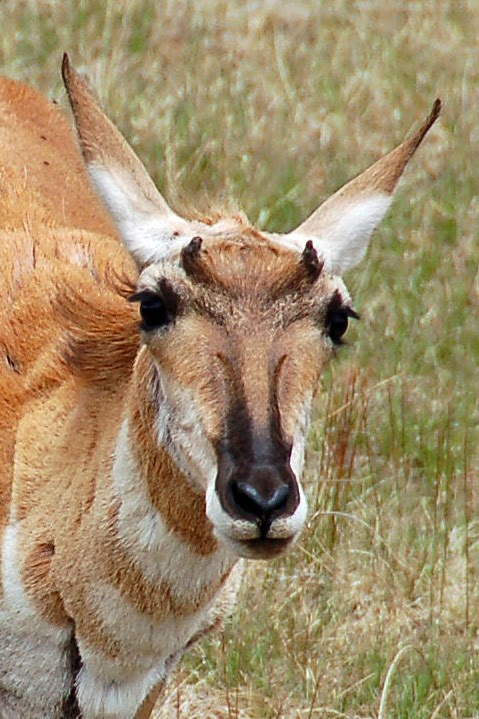 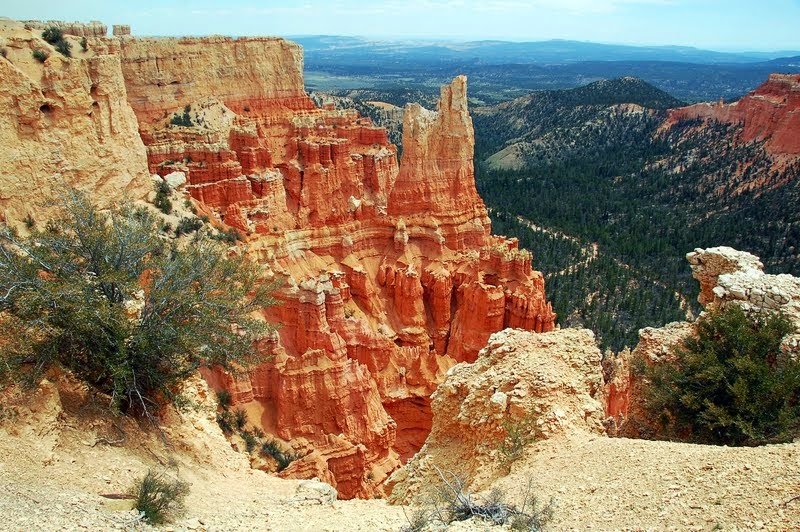 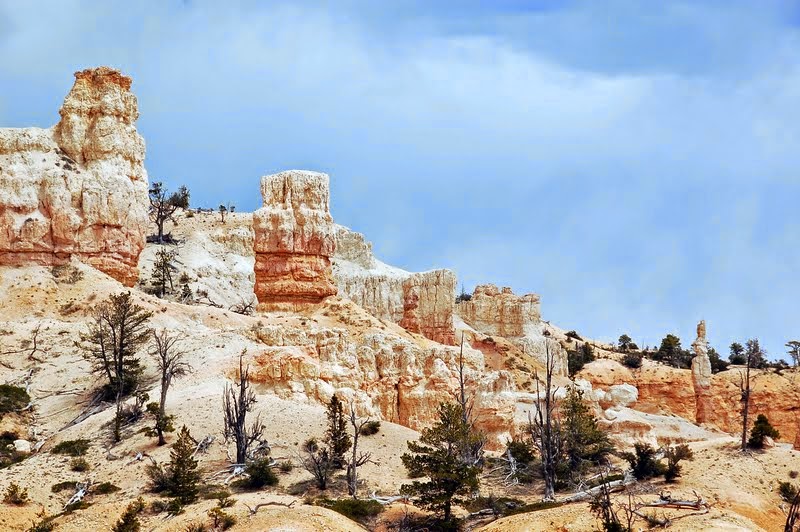 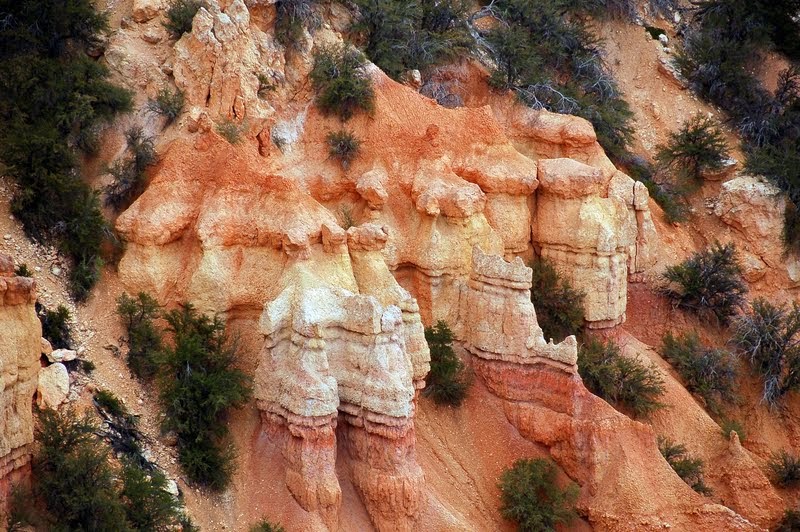 Paria View overlook. The scenery is getting more fantastic the further north we drive along the road. But the main event is coming! 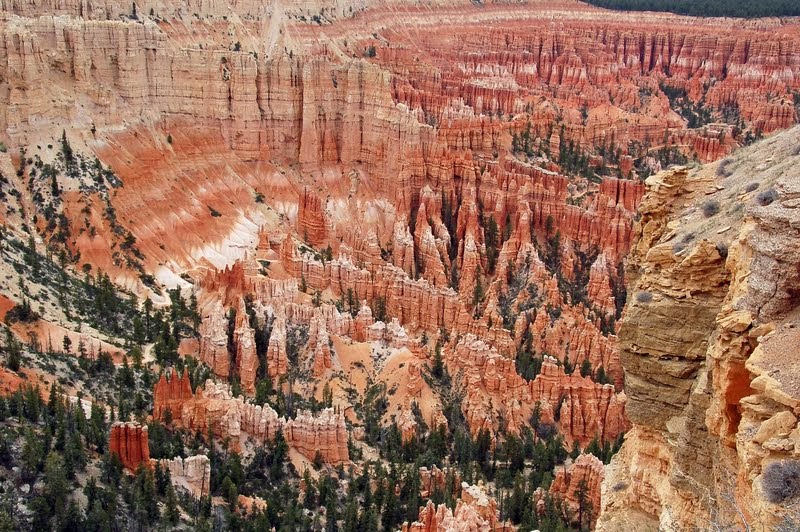 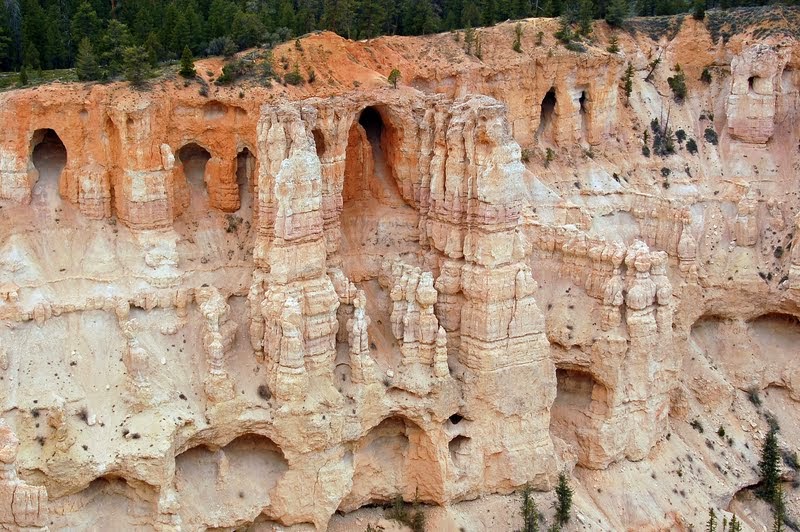 The details are amazing. 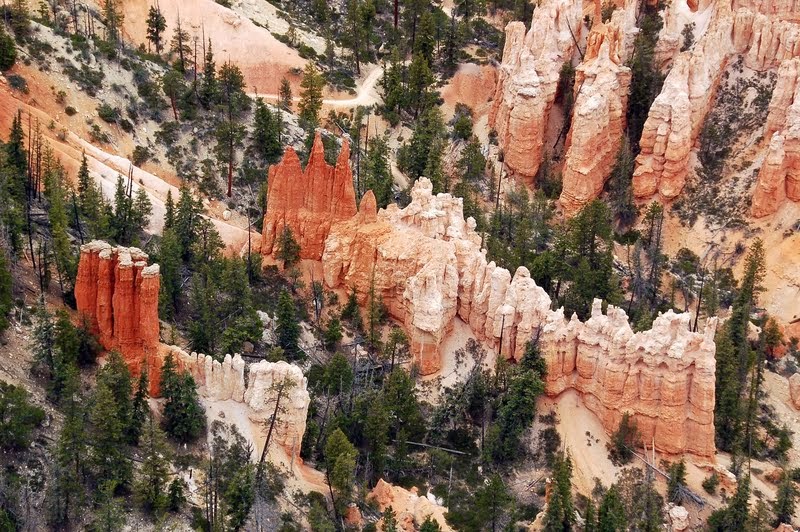 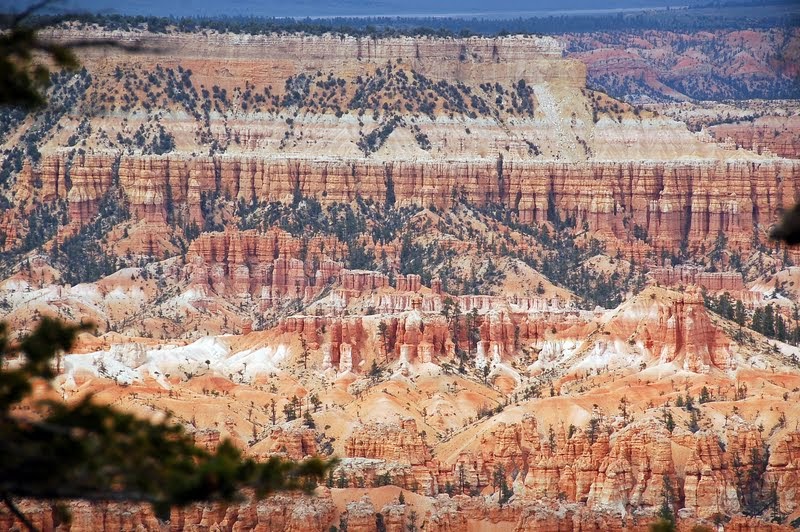 A walkway goes out along the rim,surrounding you in a fantastic immersion on three sides. 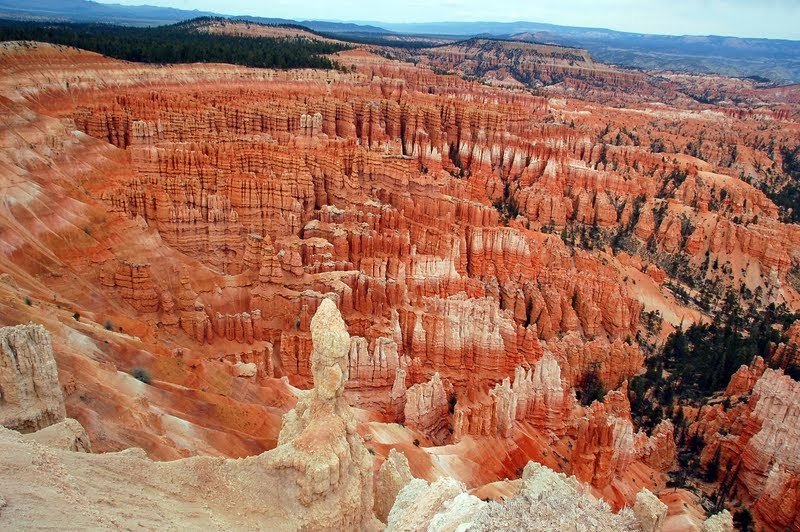 Then, we finally reached Inspiration Point. A very steep walkway up to the point, but oh so worth it! 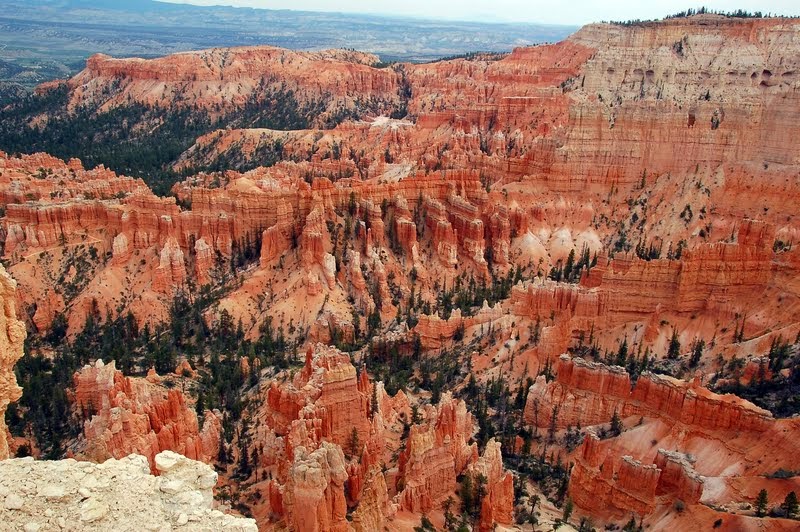 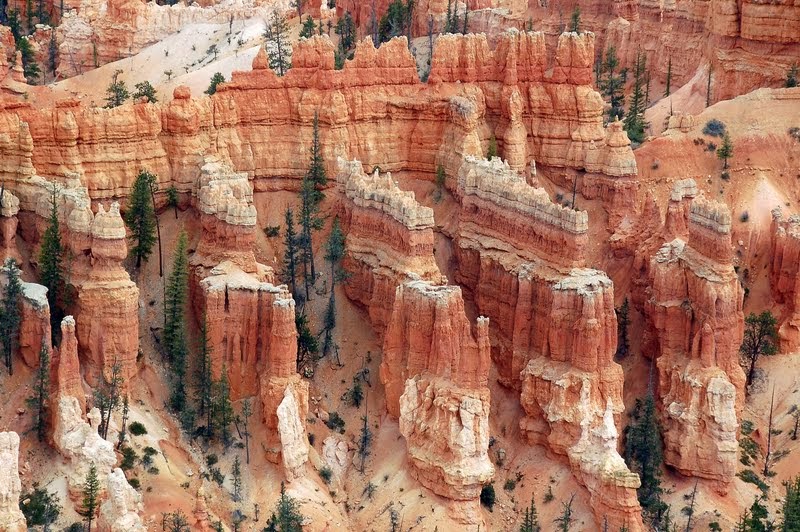 Called "The Silent City", it appears as a tightly packed cluster of hoodoos. Actually, it is a series of closely spaced gully walls, some of which are more than 600 feet long and 200 feet high. Numerous secondary walls branch off the main gully walls, adding to the appearance of density and making the area literally a maze of false passageways. 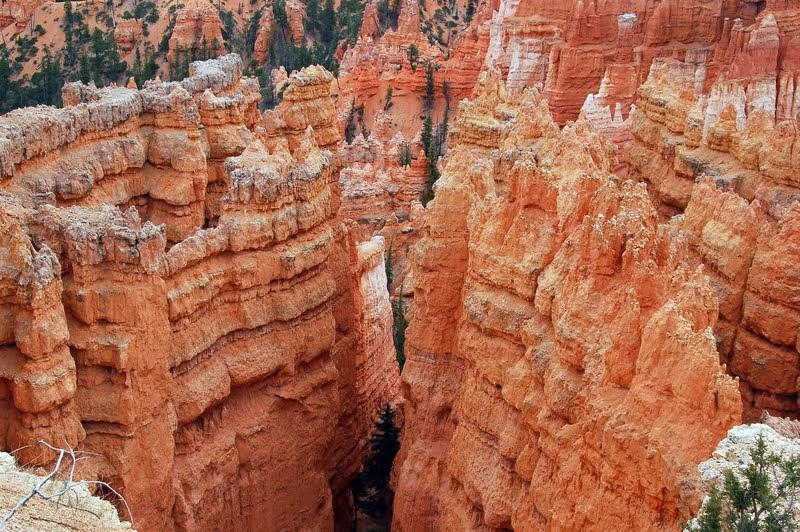 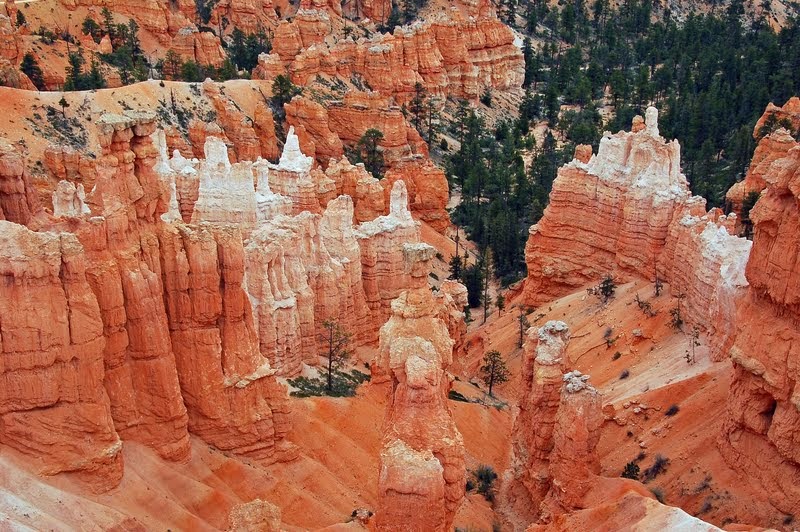 Sunrise and Sunset Points were our final stops before leaving the park for our three hour return trip to Torrey.We completely enjoyed Bryce Canyon National Park, and look forward to returning again one day, staying closer so that we can take in some of the hikes and really immersing ourselves into the geology.