Rolling Across the Country

After visiting Niobrara National Scenic River, we continued eastward on Highway 20, which runs across the top of the state of Nebraska and into Iowa. It was really nice to avoid the monotonous driving on Interstate 80 and drive on a leisurely pace, watching the small farming communities as we steadily moved eastward. We dropped back down to I-80 in Iowa and continued on that to Indiana Dunes State Park, next door to our newest national park, Indiana Dunes National Park on the south shore of Lake Michigan, east of Chicago. Indiana Dunes was a national seashore, designated in 1966, but was formally designated as a national park just this year. As it is our mission to collect as many national park cancellation stamps as possible in our lifetime and we were heading towards Shipshewana, IN, to pick up some RV furniture we had ordered in the spring, it was a no-brainer to plan a stop here for a couple of days to explore our newest park. 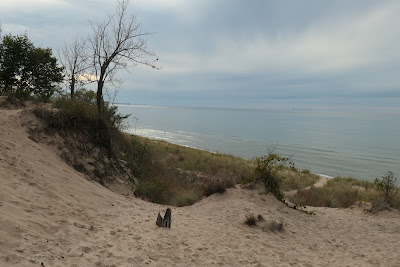 Our first night in the state park, we took a short hike from the campground over the dunes to the shore. It was a little hazy, but if you enlarge the picture, you can see the Chicago skyline on the horizon. Just outside the park entrance, you can get a train that will take you into the city, but we really didn't schedule enough time to add that to our itinerary. 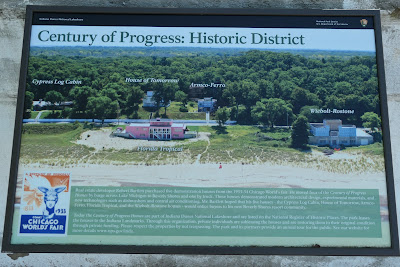 One of the interesting exhibits is five model homes from the 1933 Chicago World Fair, known as the Century of Progress Fair. The exhibit homes were bought by real estate developer Robert Bartlett after the fair and barged to their current location within the boundaries of what is now the national park. They are listed on the National Register of Historic Places and are leased to private individuals who are in the process of renovating them. The picture below shows two of the homes, the Florida Tropical home and Weibolt-Rostone home, the two directly on the shore. The other three are across the street. You can read more about it here. 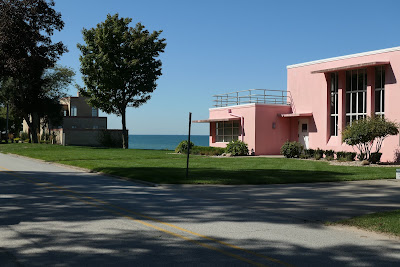 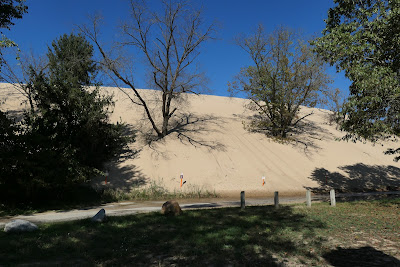 At the east end of the park is Mount Baldy, a 126-foot sand dune that is moving inland at the rate of  4 feet per year. There used to be a trail up and over Mount Baldy, but it has been closed as it's very unstable and has deep pits hiding under the surface that people have fallen into. 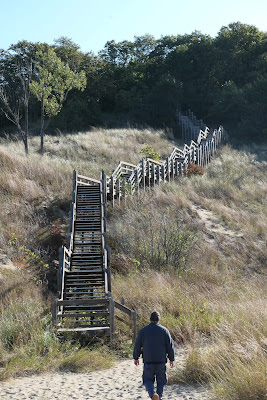 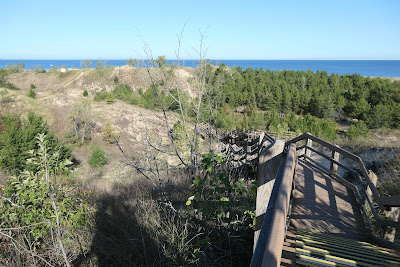 These pictures are from the West End Beach area, with boardwalk trail up and over the dunes called the Dune Succession Trail. It highlights the four successive stages of dune growth as you go along the trail. It's 250 steps up to the top, and then a long meander down the trail to the shoreline. It's very pretty and must be very busy in the summer season, but it was very quiet this time of year. 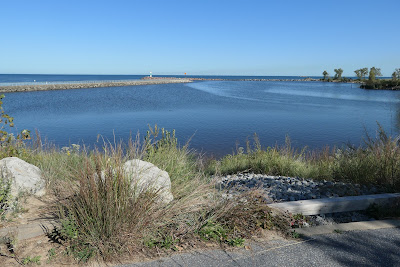 This was at Portage Lakefront and Riverwalk. A canal led from the shore underneath the highway to a marina community. It looked like another busy summer area!

Our tour of Indiana Dunes completed and all five national park stamps collected :-), we then headed over to Shipshewana to have our furniture installed. We had ordered new theater seats and a glider chair to replace our lousy Thomas Payne theater seats and rear couch. We got them from Lambright's, having been recommended by our friends at RV-Dreams, Howard and Linda Payne. So far, we are very happy with the comfort and quality of the chairs. I think they'll last a lot longer than the stock furniture did.

While setting up in Shipshewana, though, for the night, Al noticed our passenger side front tire of the rig was severely worn on the outside, so much so that it needed to be replaced immediately. He figured it was an alignment issue that caused it, so we decided to stay an extra night and he was able to get a morning appointment at MorRyde to look at the suspension alignment. We also got a replacement tire ordered from Triple-M Tires in Shipshewana, and they would have it the next day also.

So he changed it out to the spare tire, and we took the rig up to Elkhart in the morning. As soon as a bay opened, they took it in and did find the alignment was way off on that one tire. They fixed that and also redid the alignment on all three other tires. We headed back to the tire shop, had the new tire installed, and by 3:00 we were finally on the road towards Dayton, OH. Unfortunately, we lost a day so we did not have time to tour the Dayton Aviation Heritage Historical Site, so no park cancellation stamp this time.

Our next stop was in Hendersonville, N.C., for four days, with plans to visit with our friends Ken and Jodi Himes. While here, we had plans to visit the Carl Sandburg Home National Historic Site (yes, another national park stamp!), Chimney Rock State Park, Lake Lure, and visit other friends, Jim Walker and Judy Edwards over in Charlotte, N.C. We also drove over to Waynesville, N.C., for dinner at a new favorite restaurant since visiting last year, The Sweet Onion. If you're in the area, check it out! The food's delicious :-).

Our first full day was typical weather for us here in the Smoky Mountains: teeming rainstorms! We spent the morning at the rig, chatting and catching up with Ken and Jodi all morning. Then, as the rain lightened up, we drove over to the Carl Sandburg Home, and we took the tour of the home. No pictures, but it was very interesting. I knew he was a poet, but he was also a prolific writer and political activist for civil rights at the time. His wife, Paula, was also a world-class goat breeder once they moved to Hendersonville. It was quite an educational afternoon :-). You never know what you're going to learn. 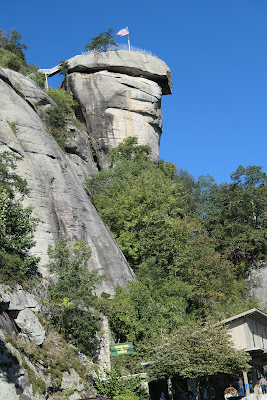 The next day was beautiful after the storm cleared things out. We headed over to do some hiking at Chimney Rock State Park. It's quite a twisty, steep road up to the visitor area. From there, there's an elevator up to the staging point to start walking up to the "Rock" and continue up to Exclamation Point. The Rock itself is a granite monolith, and its elevation is 2,280 feet; it's just a little hill compared to the mountains out west :-).
Continuing on up to Exclamation Point, you reach the highest point in the park at 2,480 feet, climbing up many, many steps in the process. It's only another half a mile from the Rock, but it's just about all uphill! 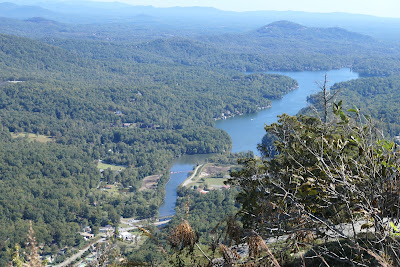 The view of the main channel of Lake Lure as seen from Exclamation Point. This area is known as the Hickory Nut Gorge, and the movie Last of the Mohicans with Daniel Day-Lewis was filmed here. Down below, in the Lake Lure area, the film Dirty Dancing was filmed. 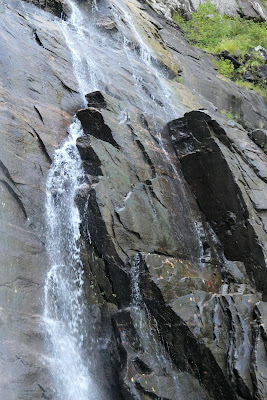 We descended from Exclamation Point and continued down further to pick up the Hickory Nut Trail to get to the bottom of Hickory Nut Falls. We had been told that the falls were quite full because of the recent rain. I will say, I was expecting much grander falls than actually was there, but this section was kind of interesting to see how the falls are eroding away a section of the cliff face. I imagine at some point down the years that this section will be sheared right off.

By now, it was time to head back down the mountain and get some lunch! We had a good meal at an Italian place, La Strada, right on the shore of Lake Lure. We had hoped to take a boat tour of the lake after lunch, but they were sold out for the rest of the day. I kept forgetting it's actually a holiday weekend! So we walked along the boardwalk running along the lake through town and visited what's called the Flowering Bridge. The bridge was closed to traffic in 2011 when the new roadway was completed, and The Friends of the Lake Lure Flowering Bridge was formed and designed a garden along the 155 feet of the bridge and pathways at either end of it with an emphasis on native plants. I can only imagine how beautiful it is in the summer when most everything is blooming. 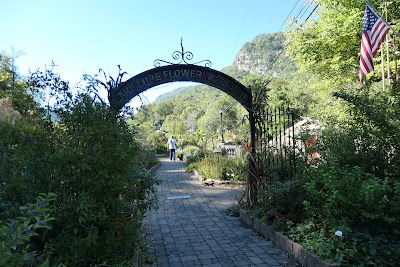 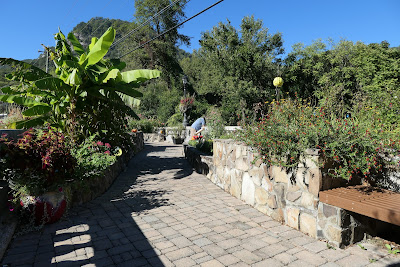 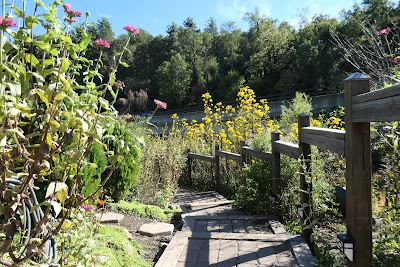 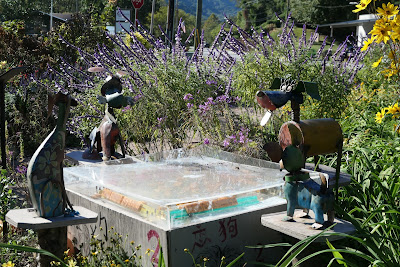 There were all different kinds of garden art everywhere along the bridge, but I particularly enjoyed these metal dogs playing mahjong! 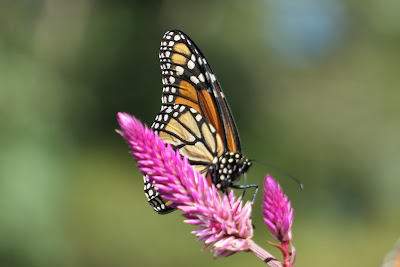 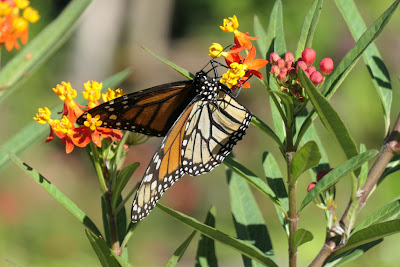 There were so many different kinds of bees and butterflies feeding on all the different plants. It was wonderful to see as many monarch butterflies as we did.

Sadly, it was the end of the day and we had to bid a fond farewell to Ken and Jodi. As much fun and enjoyment we've gotten out of traveling the past 9 years, the best part has been finding such great friends and maintaining the ties. It's a bonus that I hadn't imagined would have happened, and I'm so grateful that it has!

Tomorrow, we head to Charlotte to visit with Jim and Judy, then Wednesday, we head further down the road to Bluffton, S.C., to visit family before finding turning completely south to Florida. Hopefully, we have more good weather and enjoyable adventures to relate before settling in for the winter!