And so we have reached the end of our sixth summer season on the road and then end of our third summer season here at Luton's Teton Cabins. It has been another great summer, fires notwithstanding! We've been pretty busy for the past month. 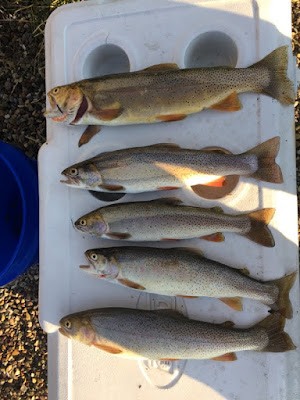 Al and Dan have continued to practice their fishing skills, bringing home many cutthroat trout for some feasting pleasures. 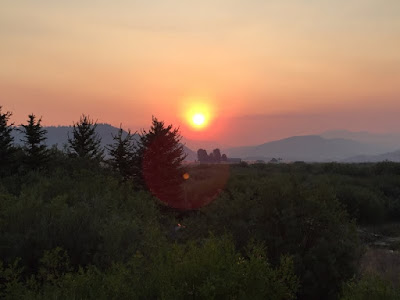 The fires had continued to create some interesting sunrises and sunsets. 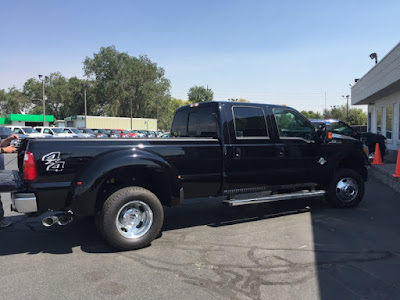 Ford put out some very good rebate and financing possibilities, so we decided to trade in our 2008 F450 for this shiny new 2016 F350. I am fully expecting NOT to be writing about any more truck issues for a long, long time! 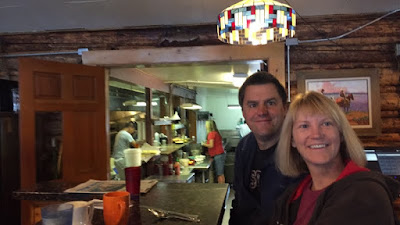 On the way to Idaho to pick up the new truck, we joined Dan and Jonell for breakfast at a new spot, Nora's Fish Creek Inn in Wilson, WY. It was great! 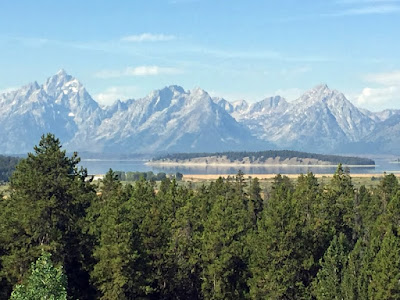 We took a hike high on the eastern side of GTNP, overlooking Jackson Lake. 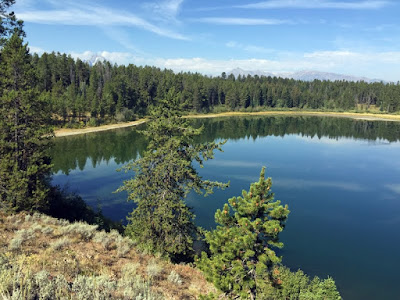 The hike took us to Emma Matilda Lake. 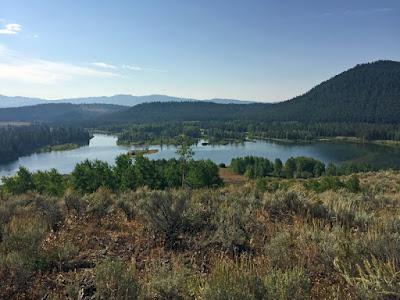 A beautiful view of Oxbow Bend from above. 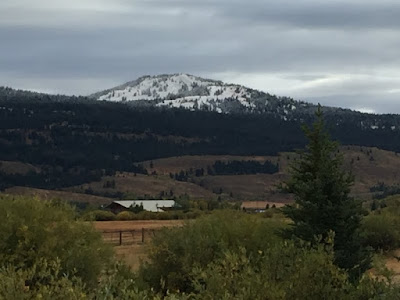 We had light snowfall mid-September, as seen from our campsite. Two days earlier, we had been riding horses on that mountain! 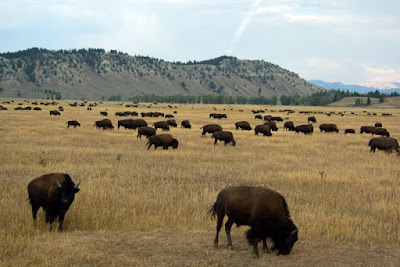 Just after Labor Day, a herd of a couple of hundred bison took up residence at Elk Ranch Flats, about five miles from us. They were quite popular with the visitors. 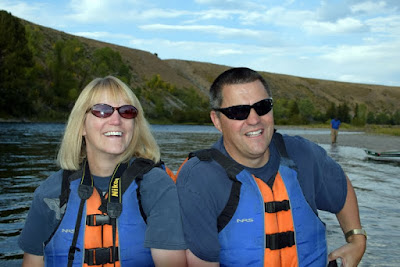 We took a late afternoon float trip on the Snake River with Dan, Jonell and Jane, another co-worker. 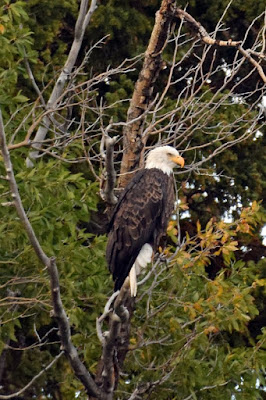 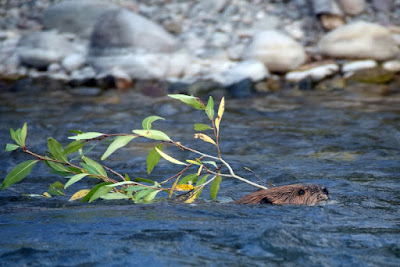 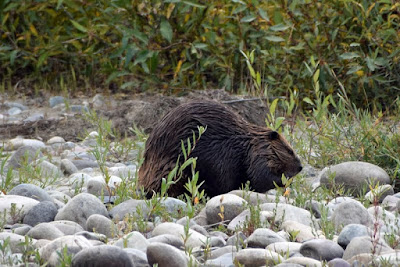 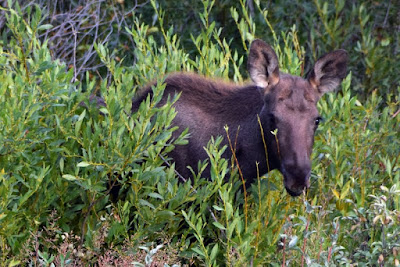 and a young moose. It was a really beautiful evening. 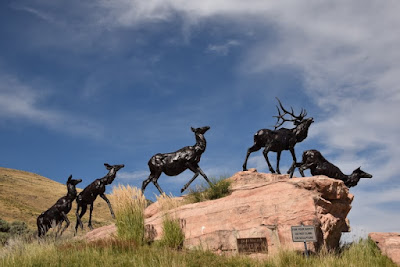 Our friends John and Carol Herr were in town for about three weeks, and we met them one afternoon and went to visit the National Museum of Wildlife Art in Jackson. 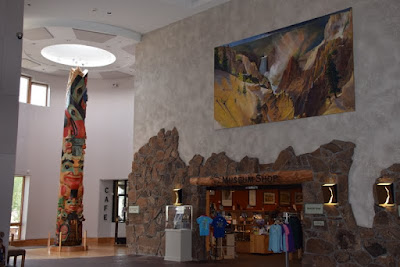 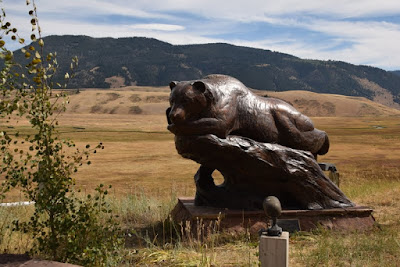 The museum was very interesting and had a good cafe for lunch as well. 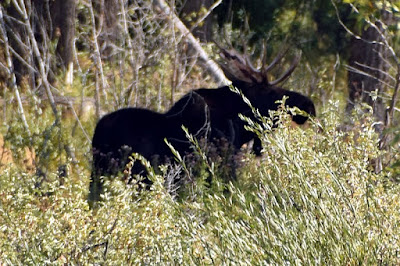 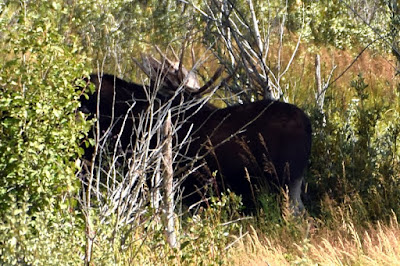 On the way back to their campground on the Gros Ventre River, we spotted these two bull moose along the river. 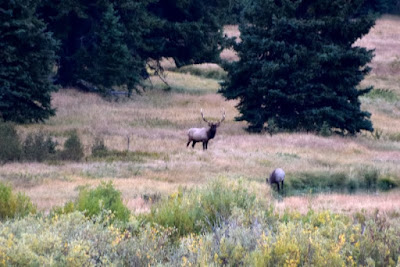 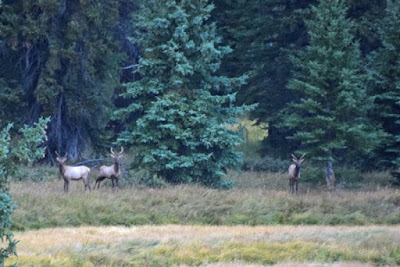 Our friend Jack and Joyce Aughtmann arrived in town for a few days on their way to Oregon, and we went on a ranger-led safari caravan sponsored by the National Park. We saw the usual suspects, pronghorn, bison, beavers, and we also saw this herd of elk from afar, with the big male bugling away. 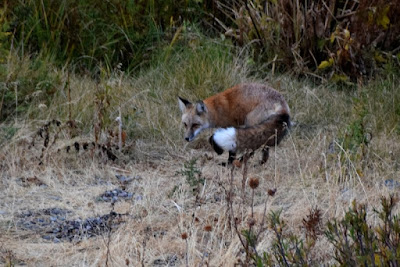 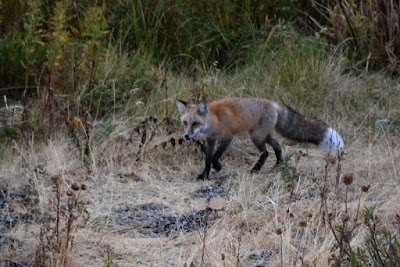 A real treat was this beautiful red fox, hunting for rodents below a ridge we were on.

Towards the tail end of Jack and Joyce's stay, another couple that had worked with the four of us in Colorado, Joe and Sandi Wingert, arrived in town as well, on their way to Denver from their summer jobs in Buffalo, WY. The six of us got together for dinner in Jackson before Jack and Joyce departed. We were only missing Steve and Teresa Heede, who worked with us in Colorado, then last year here with us at Luton's. This is my favorite part of this gypsy life: meeting new friends and making lasting friendships!

While Sandi and Joe were here, we spent our day off going up to Yellowstone with them, visiting the Old Faithful Geyser Basin. We got to see two geysers go off, Old Faithful and the Riverside Geyser. It's always so awesome to visit this area and marvel at the geothermal features.

We are now finishing our last week here at Luton's, and we will be back on the road starting Wednesday. We have some hard traveling to do. Usually, we try and spend at least three weeks traveling and sightseeing before heading into Amazon for our fall gig, but this year we need to get back to Long Island, New York to attend a family wedding.  We didn't want to drive the rig that far back east and through NYC, so we are headed to Florida to drop the dogs off with family and then flying up to Long Island for the wedding. We will be there visiting for five days, then fly back to Florida and spend a few days there. Then it will be back to Campbellsville, KY., to start our sixth season at Amazon on October 17. I hope to have some nice pictures of my hometown, Sag Harbor, for another blog, as well as our adventures at the Food and Wine Festival at Epcot in Florida upon our return. Thanks for spending the summer with us!
Posted by Al and Karen at 4:39 PM