I've had some comments that folks are missing the pictures of the dogs. Its most unfortunate that they are not allowed on the National Park hiking trails with us. There are so many different trails to choose from here, and we want to see so many. We had been feeling guilty about not taking them, but they actually have a blast right here on the ranch, so our guilt has been mitigated a bit at least :-). So I thought I would devote a blog to pictures of them and their friends, and a few of the happenings that go on around the ranch.

Our neighbors Larry and Elaine have three little dachshunds, Rusty Rascal and Cody. They stopped over for a visit one afternoon while we were sitting outside and I grabbed my camera. 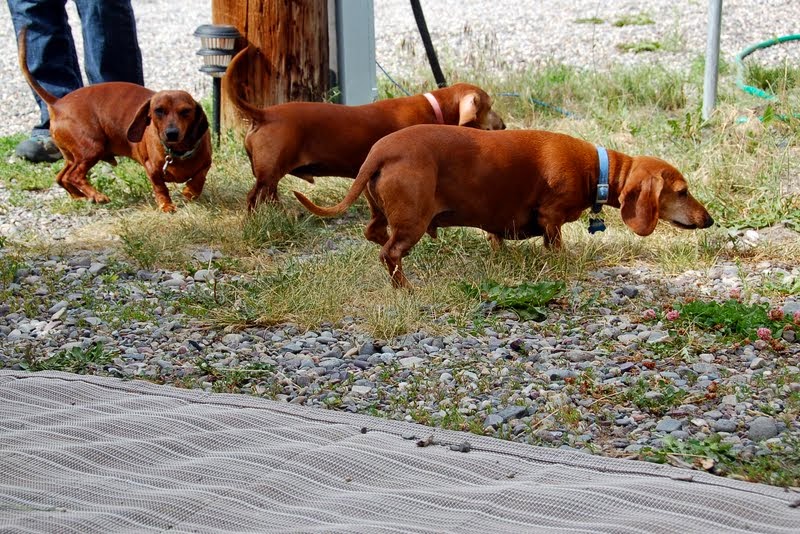 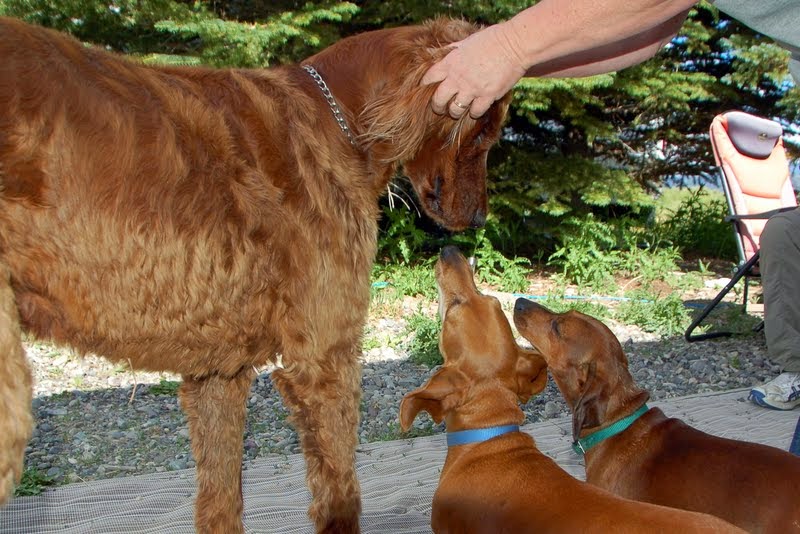 Casey getting a sniff in with Rascal and Cody 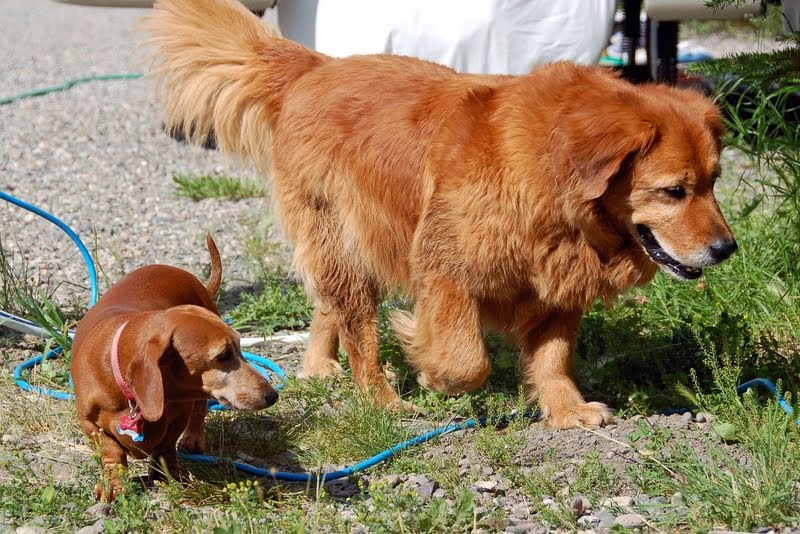 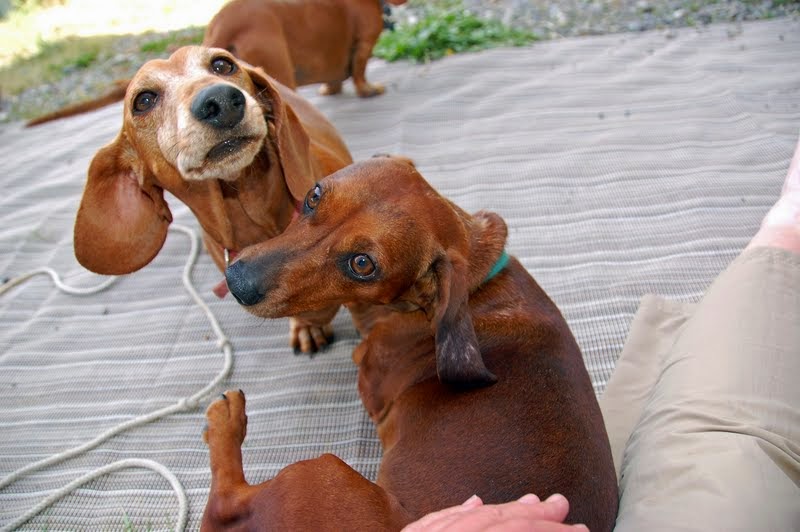 They are little cuties. Cody stretched out along my leg and rolled over for a tummy scratch. 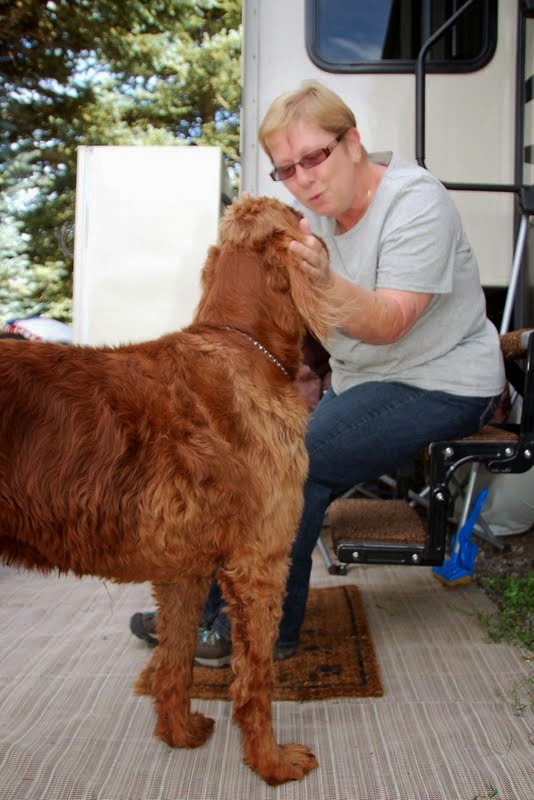 Elaine has a fondness for Casey, but then again, who doesn't?

For those of you with sharp eyes, yes, that is a refrigerator outside of my trailer. About two weeks ago our string of luck continued with the coach's fridge starting to warm up, getting warm enough that it was endangering the food. So we turned it off, luckily having access to a fridge in the maintenance garage that we are allowed to use, and the fridge in the lodge for the excess. When our boss Brad found out, he sent an old fridge he had (they had replaced four fridges in the cabins the week before) over to our site for us to use while waiting for ours to start working again. Al did a good bit of research online about it, and I was quite perturbed...it's only 6 months old for goodness sake! He did what he felt comfortable doing, and then we finally called a mobile RV tech from Jackson. He gave us a few more ideas to try before coming out, and when that didn't work he came out for a visit. Long story short, after replacing the thermistor, and "burping" it three times, it seems to be working again. "Burping" is the process of turning it off for at least 24 hours, then turning it back on. Apparently air can get trapped in the lines, although usually when moving and we haven't moved since May 29. Whatever works, right?

On Saturday August 2, the owners of the ranch, Brad and JoAnn, left on a week's trip, "packing" in the back country. Every now and then they will take off with their horses and disappear into the wilderness. I've asked many questions, and knowing how interested I was, Brad invited me to come and watch them prepare to leave and take pictures. 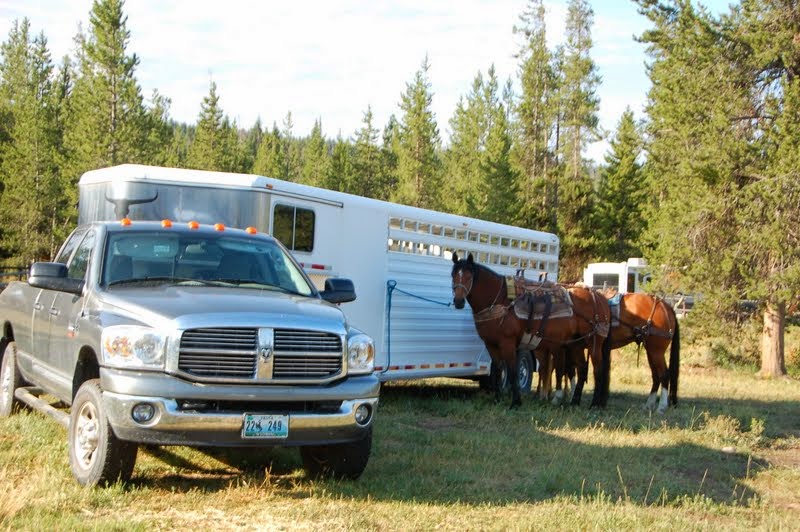 They take 7 horses with them on their trips; 2 for them to ride, and the rest to carry all the provisions for the week. The trail head they left from is about ten miles from the ranch, at Turpin Meadows. They trailer the horses there. 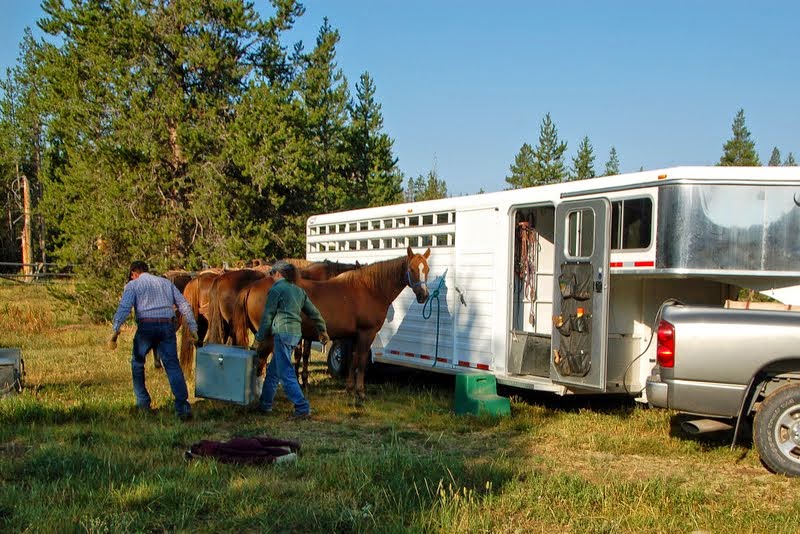 The silver containers hold their supplies and provisions. 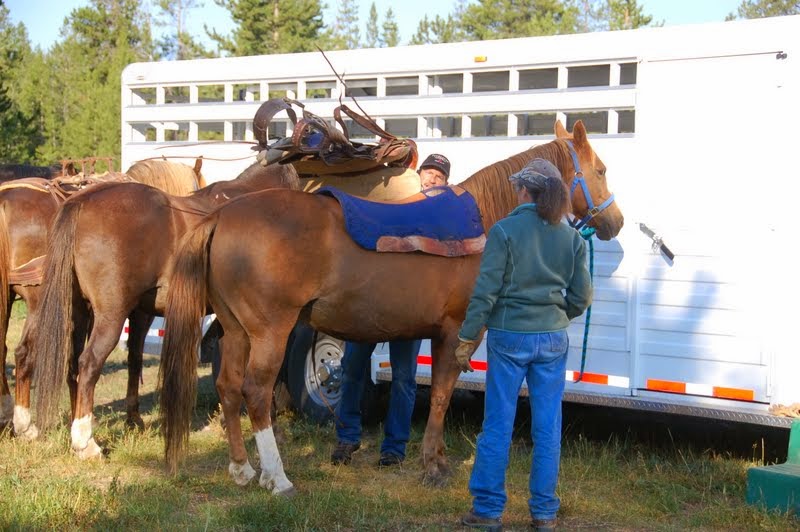 Brad and JoAnn are getting their horses saddled up and ready to go... 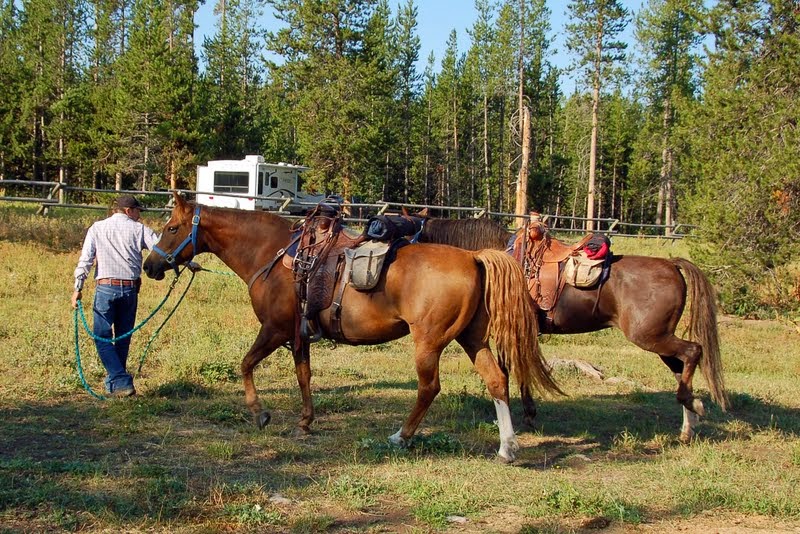 and then he leads them off to wait for the pack horses to get ready. 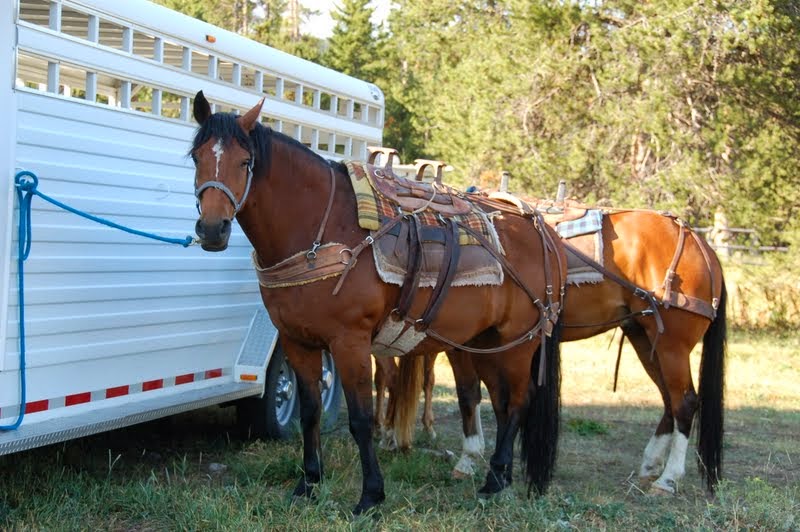 If you notice it's a different type of saddle for the pack horses. 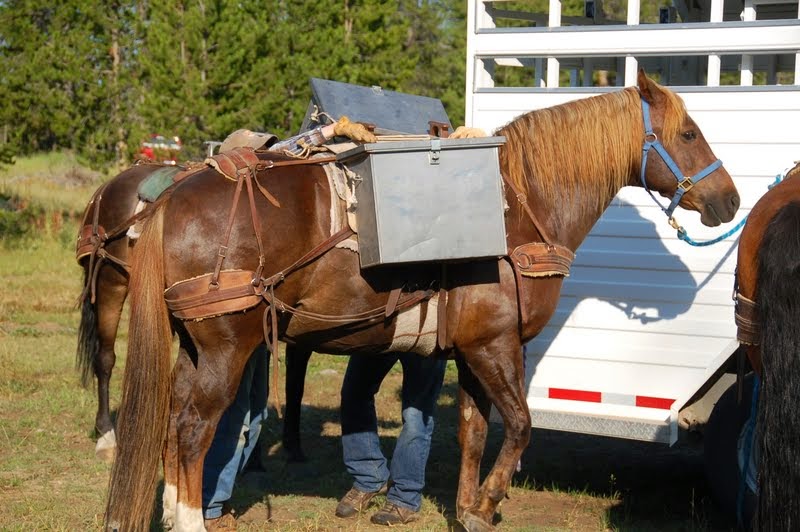 Each container weighs between 65 and 80 pounds. They have to take everything they need with them for the week. for themselves and the horses. They have two tents, a kitchen tent and a sleeping tent which is set up at least 100 feet away from the kitchen tent... bear safety. Clothing for all types of weather as it can turn cold and even snow at any time. They also bring portable fencing as a corral for the horses. It's quite a process, which they have down to a science. By this time, though, it was time for me to head back to the ranch for work, so I wasn't able to see them off. 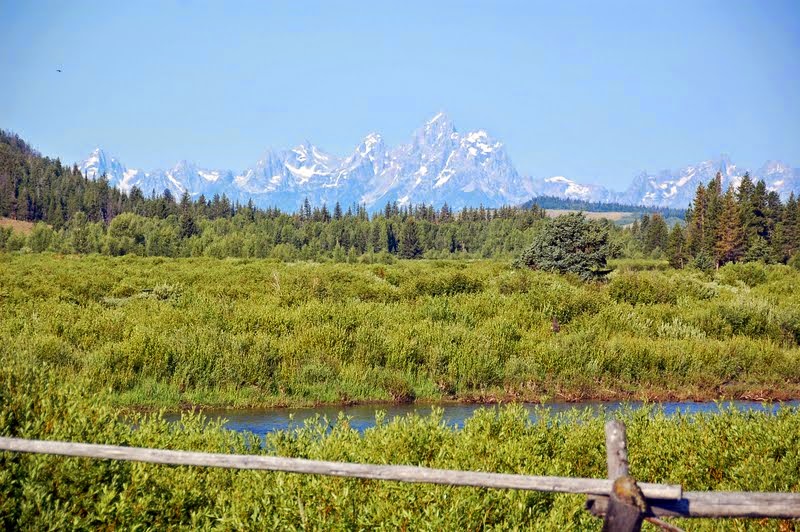 I did have this beautiful view as I drove back though!

The following week, after Brad and JoAnn returned to the ranch, they had a "camp cookout" for all of us, and set up their camp for us to see. 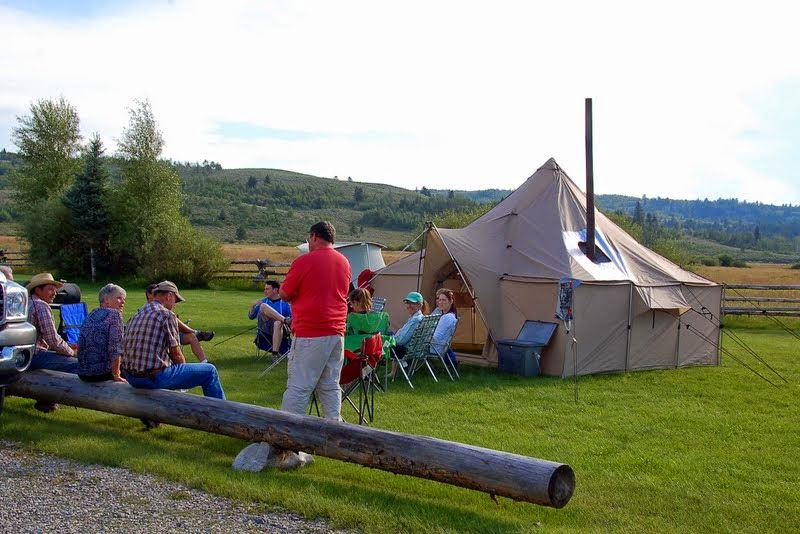 Our group gathered in front of their kitchen tent on the lawn of the lodge. Behind Al you can see part of their sleeping tent set up. 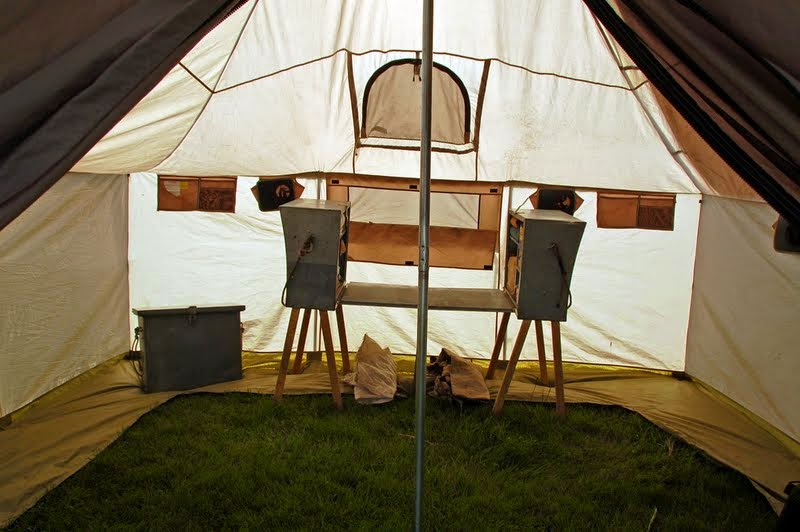 Inside the kitchen tent. 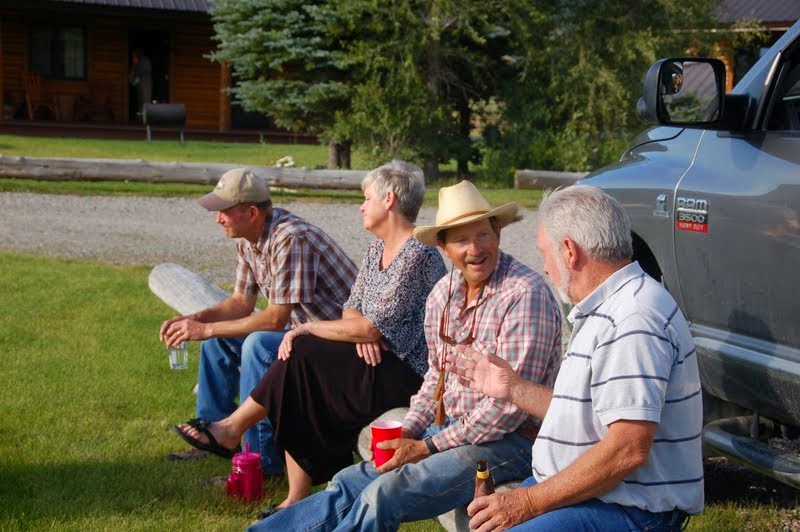 From left to right: Mike and Vernel, who have been working here for the last 6 years, Brad and another workamper Larry...Larry is dad to the 3 hot dogs :-) 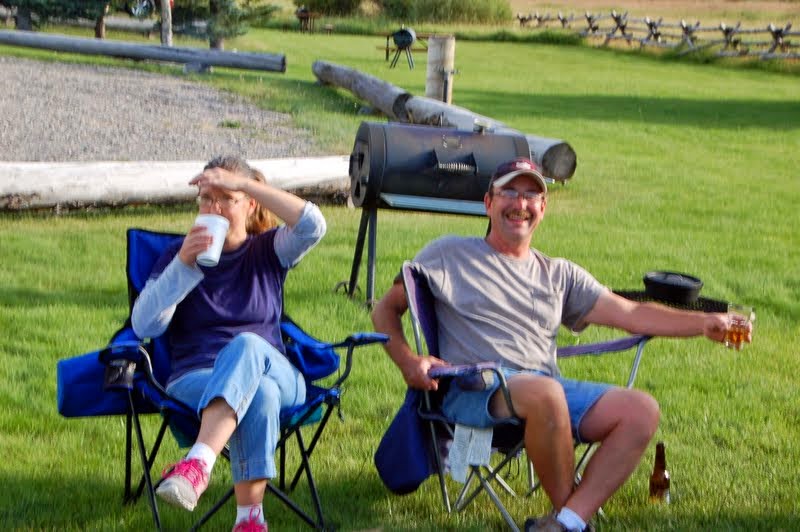 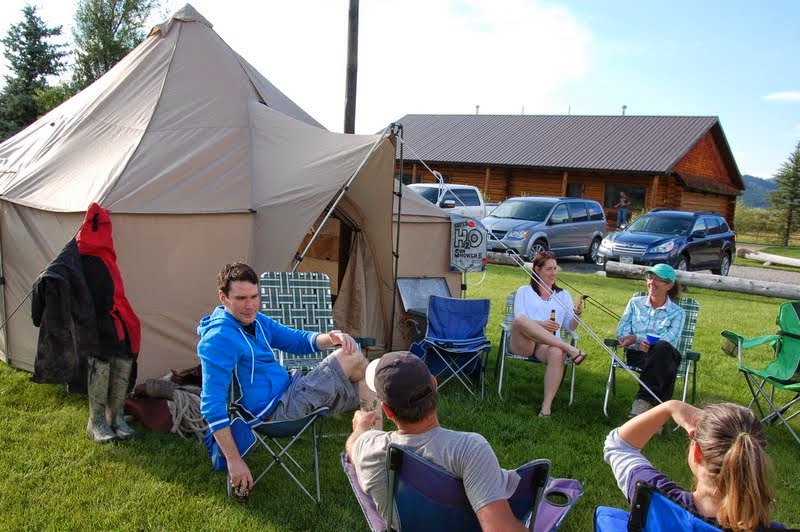 JoAnn is in the green ballcap to the right. Some of their rain gear is hanging on the side of the tent.

We get together every other week or so to have dinner and socialize, which has been really nice. As it's such a small group, we really don't have time off at the same time as other couples, so it is difficult to do fun stuff together. This makes these dinners a nice opportunity to relax and talk about stuff besides work :-). And its also a great chance to get to know Brad and JoAnn better as well. We have been very happy here, even with our trials and tribulations, and look forward to a nice end to the season as well. It will come all too soon....after all, it's already the middle of August!!
Posted by Al and Karen at 6:49 PM