I still have a couple more blogs to post about our stay in Moab, but things will be a little out of sequence as I wanted to update everyone on where we are, and what we're doing!

First, the truck update: as of Friday, it was still at Young Ford in Morgan Utah. Ford had decided before they would authorize a new engine, they wanted the engine torn down to find out exactly what is wrong. That, of course, added extra days. Friday Dean called and said that a fuel injector had stuck open, dumping extra fuel into the cylinders, and that cylinder 6 was burned out and cylinder 8 was close. He sent the diagnosis and pictures to Ford extended warranty and is awaiting their decision. He doesn't expect them to deny the claim, but said they MAY send out an inspector to verify the damage. Hopefully not, and work can get started soon this coming week. Fingers and toes are all crossed!

We pretty much hit the ground running here at Luton's. We arrived Friday afternoon, and got settled into our site. Saturday we were off all day and set out to do a brief exploration of this north end of Grand Tetons National Park. Saturday night we gathered at the Lodge to have dinner with the other couples working here, and hosted by our employers, Brad and JoAnn Luton. JoAnn had prepared a great meal of baked ham and sausage, with roasted potatoes and vegetables, dinner rolls and pie for dessert. During dinner they encouraged each couple to talk about where we're from, how long we've been working on the road, where we've been. It was a wonderful introduction to each other, and Brad and JoAnn also participated, telling us their history and how the guest cabins came to be. It's quite a fascinating story. 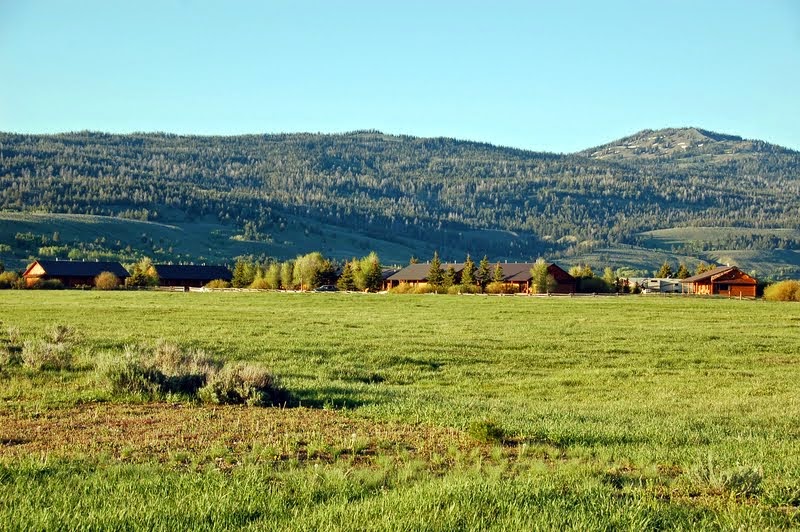 The cabins as viewed from across the field

Both Brad and JoAnn's families are long time Wyoming families, and the guest ranch is built on a parcel of land originally belonging to JoAnn's family. In 1989 they had to make a decision on what direction they were going to go with the property, and ultimately decided on making a portion of the property a guest ranch, with cabin accommodations for visitors coming to Grand Tetons National Park and Yellowstone National Park. 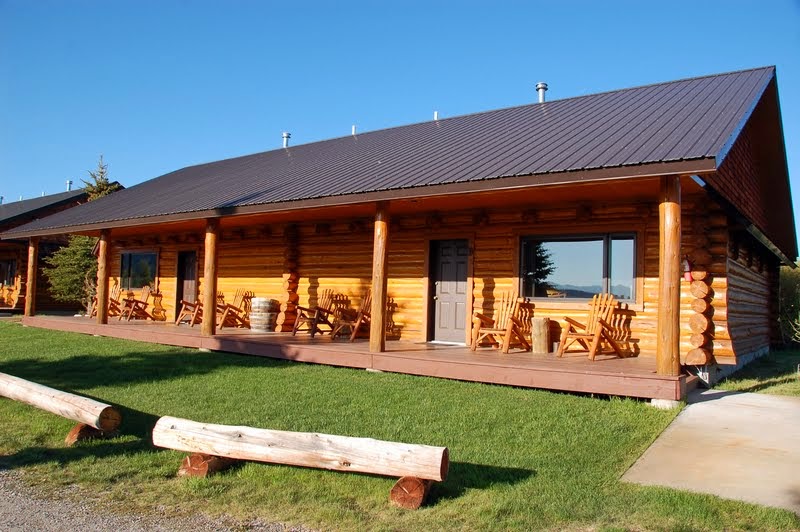 The cabins were all built by Brad and JoAnn themselves, with help from a few family members. They started by getting a permit from the Forestry Service to harvest dead lodge pole pine from the forest ( the trees had been killed by the devasting fires in 1988), and then  felled the trees, hauled them out of the forest, and did the process of "peeling" the logs. All before actually beginning the construction of the buildings! They have a scapbook online, which can be viewed here going into more detail of the process. I found it all fascinating, as well as not being able to imagine the work that was involved. 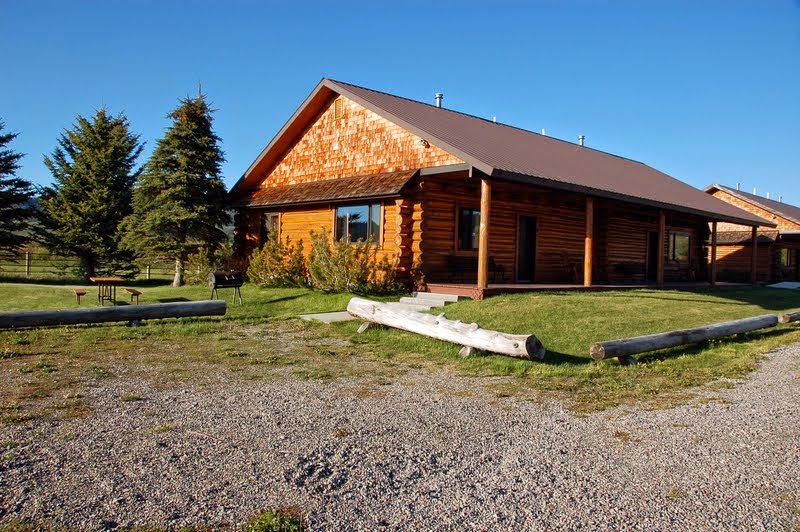 The cabins have now been in use for 19 years, and as unbelievable as it sounds, they look brand new. Once I go into detail of the cleaning and maintenance processes, you will understand why :-). 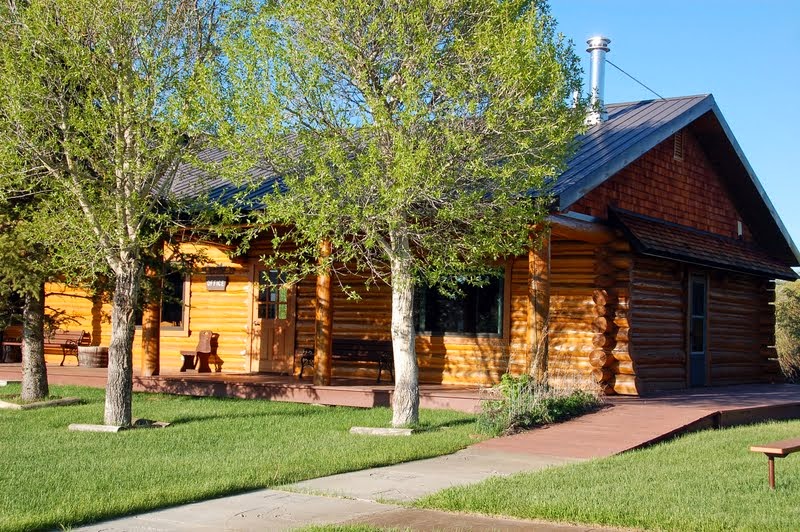 This is the office for check-ins, with a cozy room with a fireplace that has seating and plenty of reading material about the area. 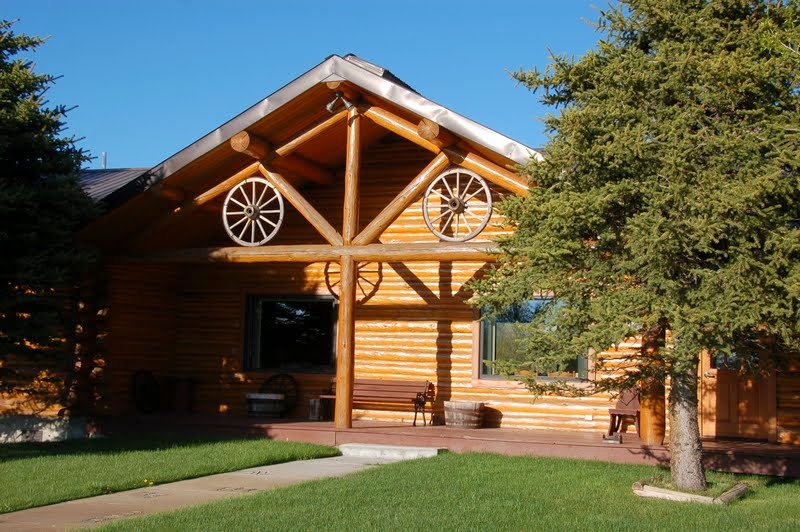 The left side of the office building is the Lodge, with dining tables and a large kitchen. In the beginning they used to serve meals, but found it wasn't a service that most people needed or wanted, and was not a breaking even proposition for them. All cabins have full kitchen facilities, as well as an outdoor grill and picnic table, so most guests make their own meals. If there is a large family gathering that needs more room they are welcome to use the dining room to gather for meals. We are also free to use the tables for worker gatherings, game nights and such. 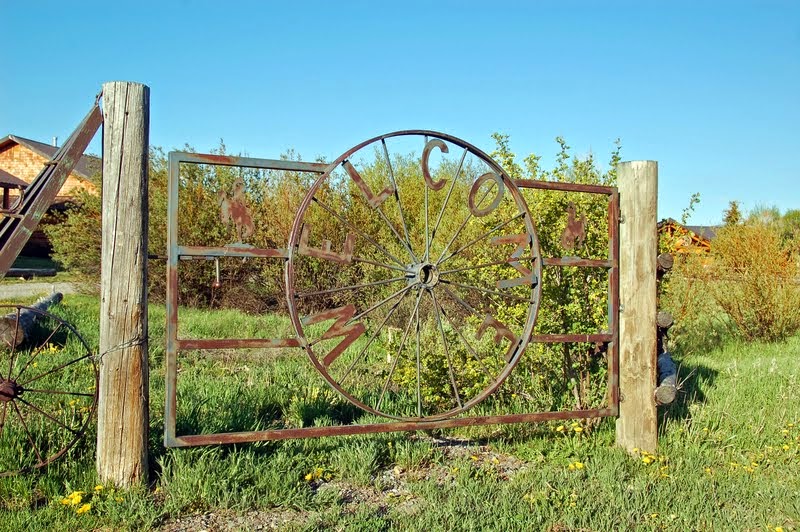 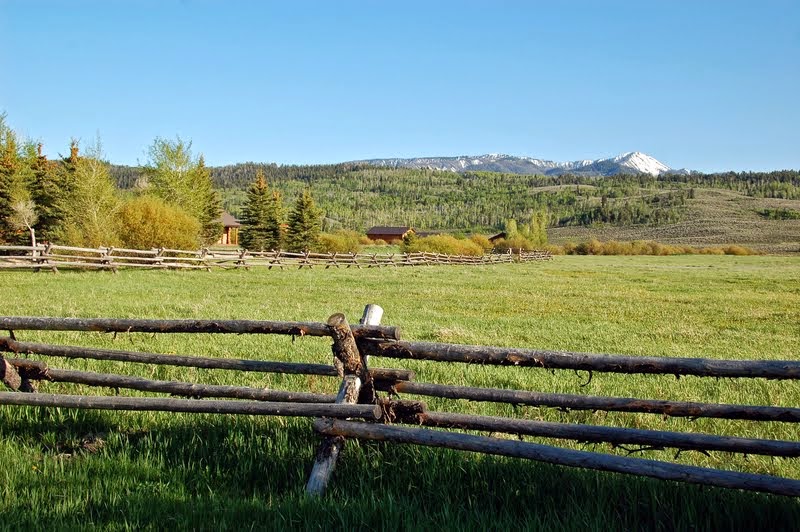 Casey is in seventh heaven, as outside of the guest area is this beautiful open field where he can run to his heart's content off leash. 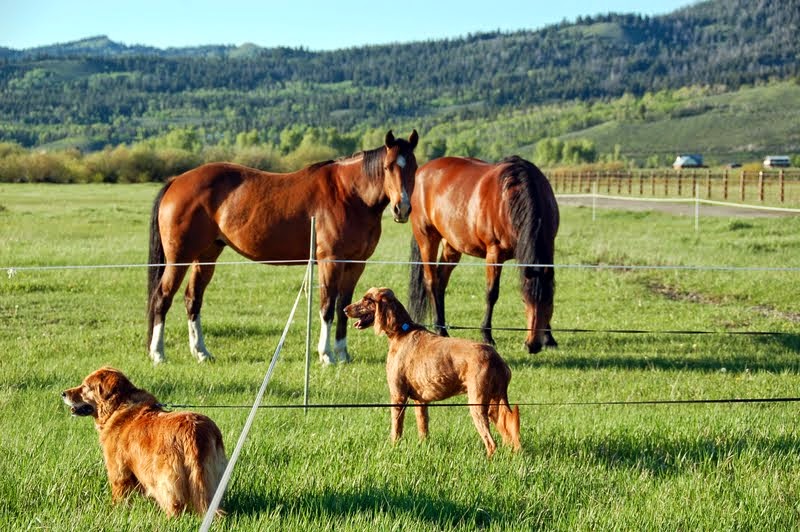 Each night we walk out after dinner to visit with the horses. There were cows in the pasture across the street when we arrived, but they have moved to the summer grazing fields. 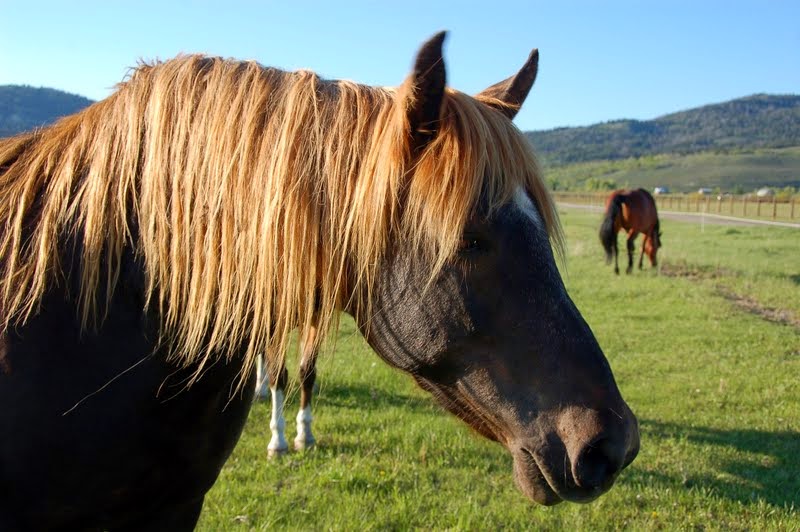 The horses are beautiful! 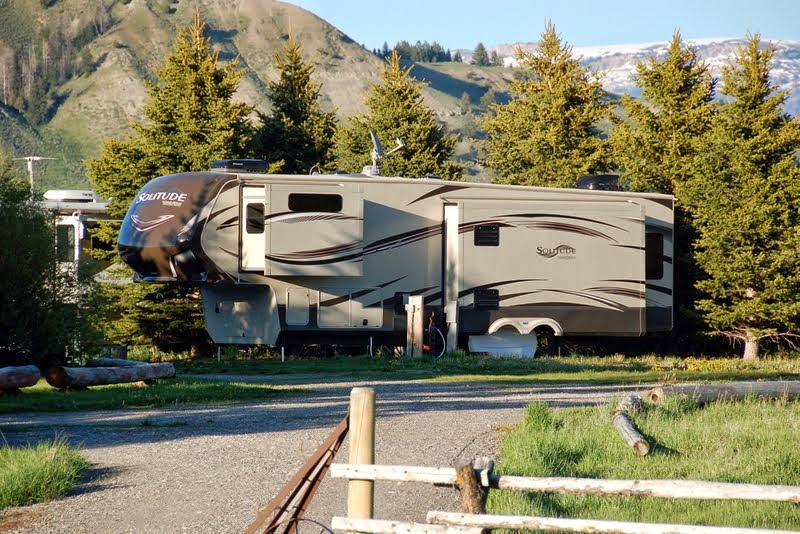 Our sites are behind the cabins. There are four couples, three of us are here and the last one is coming this week. 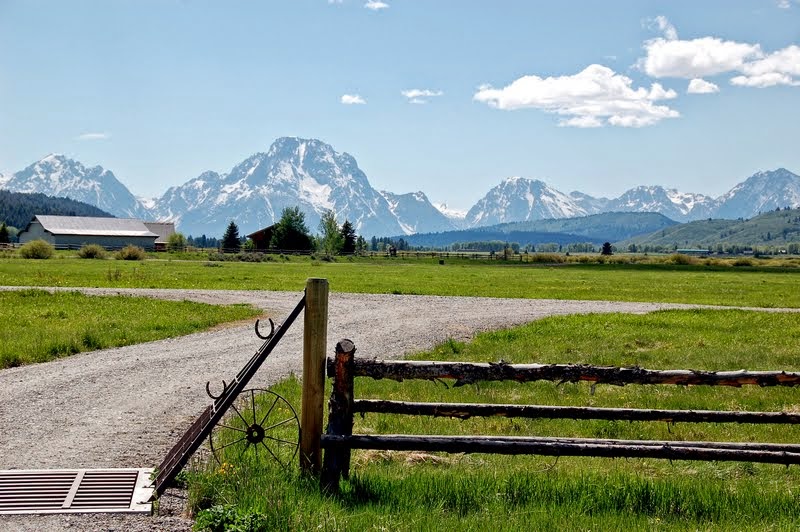 We walk out of our driveway across the cattle guard (Casey and Honey have learned to walk on the edge like a balance beam, its so funny), then cross the field to the far fence. 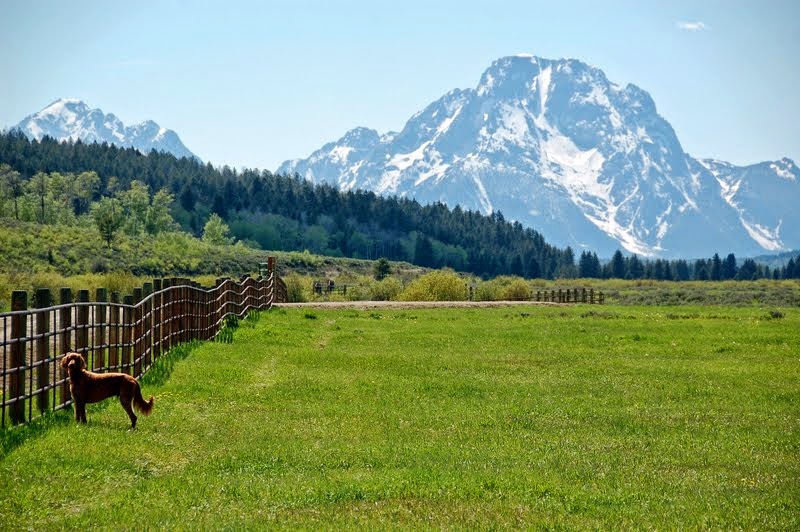 We have about a half mile walk down the fence line, and come to a footbridge across the creek... 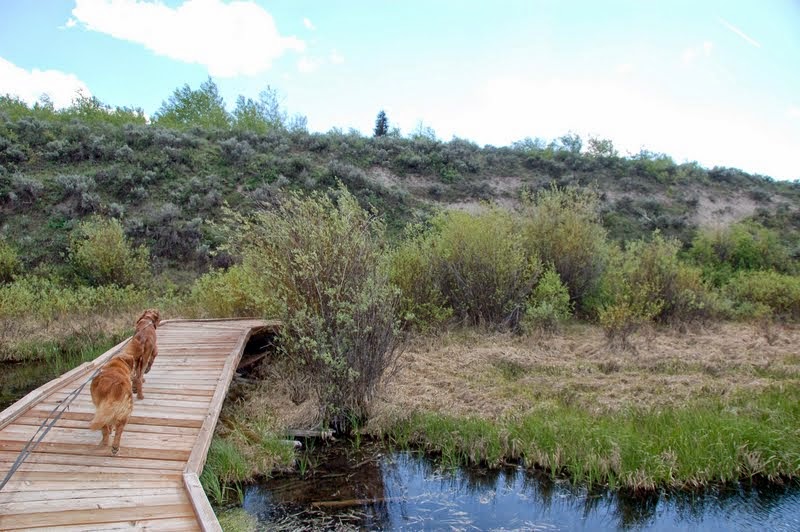 from there we start going UP! There are miles of trails out here to be explored, and we don't need to even drive anywhere :-). Of course, we ALWAYS carry our bear spray if we go further than the footbridge. It is always a possibility they are out there, and there is also a wolf den somewhere in the area. Al did see a wolf in the distance one morning, but it took off as soon as he and the dogs came in view (a good thing). 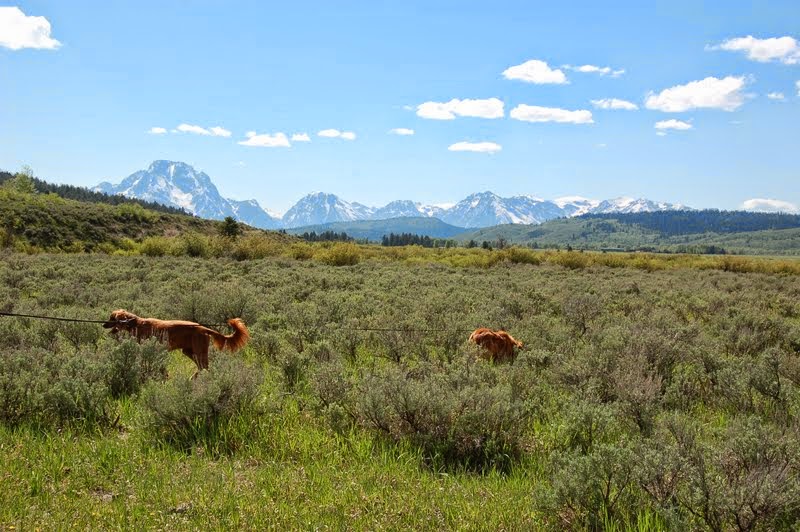 The dogs love poking around the sagebrush, and all the holes to poke their noses into....luckily, there are no rattlesnakes here, so we don't have to worry about that....just bears and wolves :-). 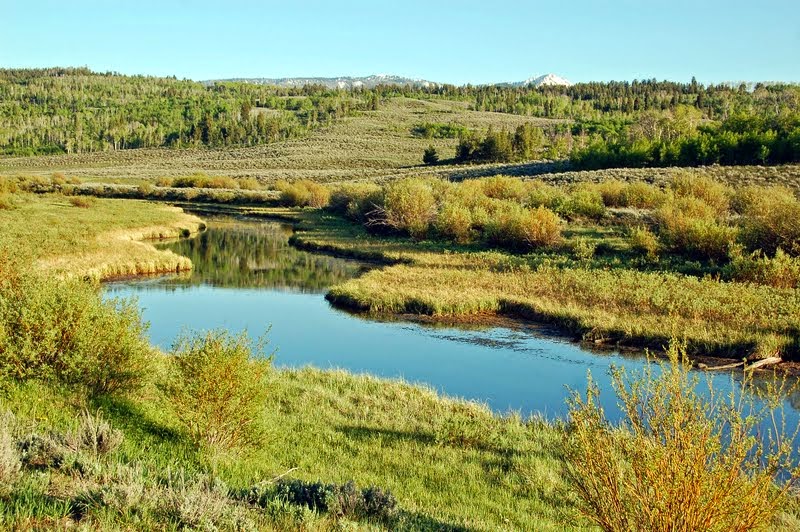 The creek running through the ranch. It also has an offshoot right behind our sites, and I've seen lesser scaups and ruddy ducks back there quite often. I've been told sometimes the river otters travel through, but I haven't seen them yet. 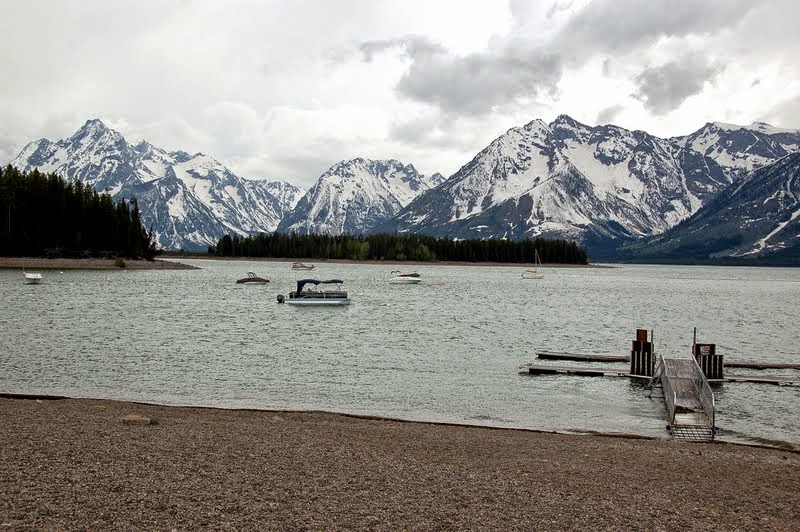 The few spots we've checked out so far include Coulter Bay. This side has Leeks Marina and restaurant, with some pretty tasty pizza. 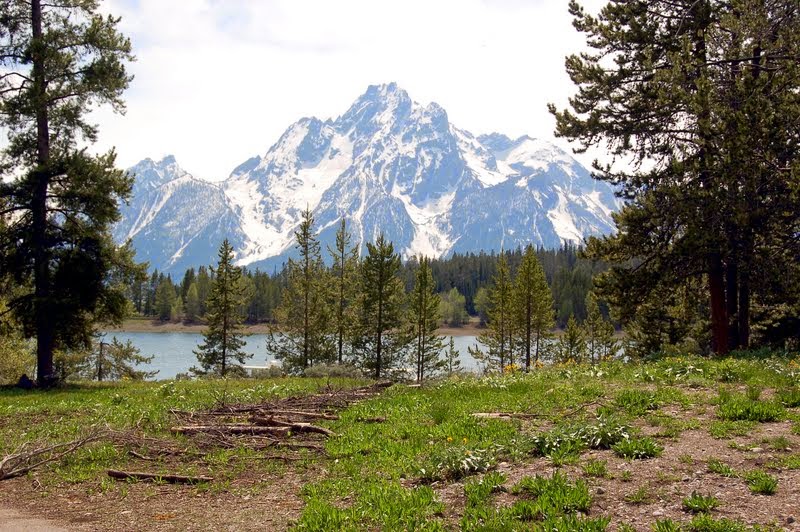 The other side of Colter Bay has a large Park Service Visitor's Center, marina, campgrounds, a General Store, and a Convenience store, as well as a gas station. It is closer to us than Jackson, but you don't want to do much shopping there, or fill up your gas tank...pretty hefty prices :-). 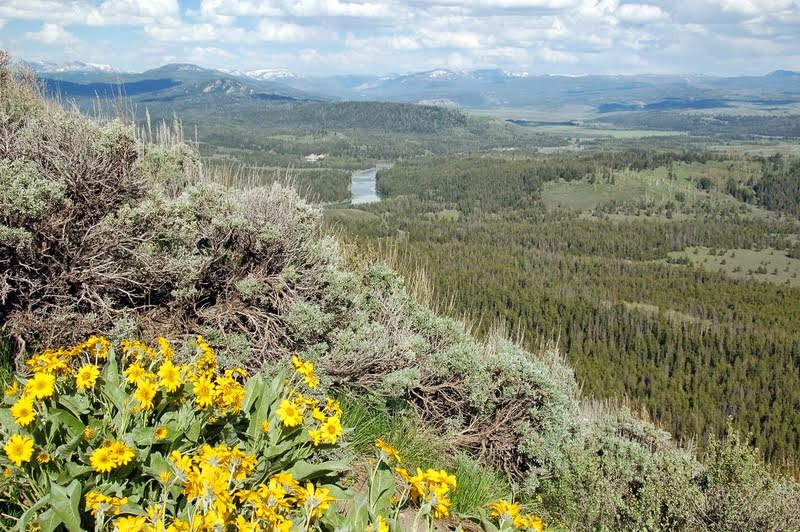 We drove to the top of Signal Mountain one night after work. These yellow flowers are in bloom everywhere and are just beautiful.

I guess I got a little ahead of myself. Once Sunday arrived, we started work and had six days in a row to start! Training was Sunday and Monday, which are going to be our normal days off this summer, so just the way the schedule ran, we were going to be working seven days in a row. Ouch! The days aren't too long though, starting between 8 and 9 and going until 3:30-4, sometimes later as the season wears on. And by Friday I think they were feeling sorry for us so we had Saturday and Sunday off, so only six days :-). We really haven't done too much exploration, but we did check out a couple of dirt roads already ;-). 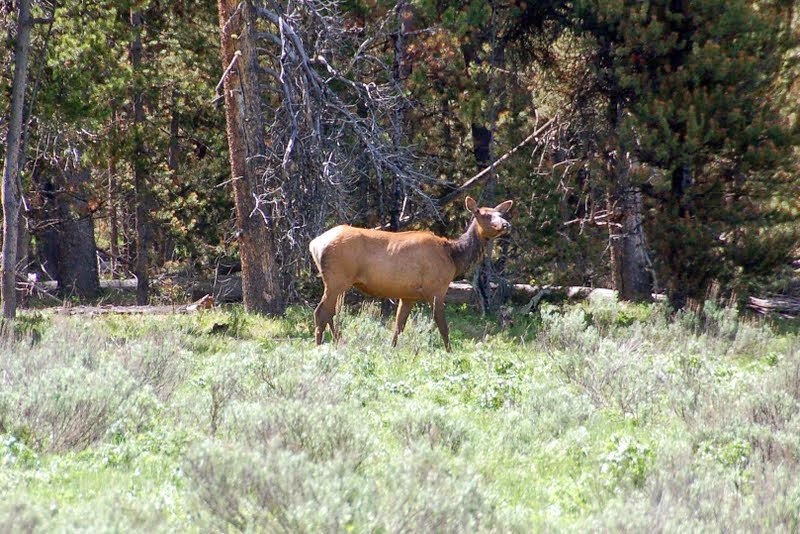 One road was Prairie Creek Road, which led to a hiking trail into the Teton-Bridger National Forest. We saw some elk on the way to the trailhead.... 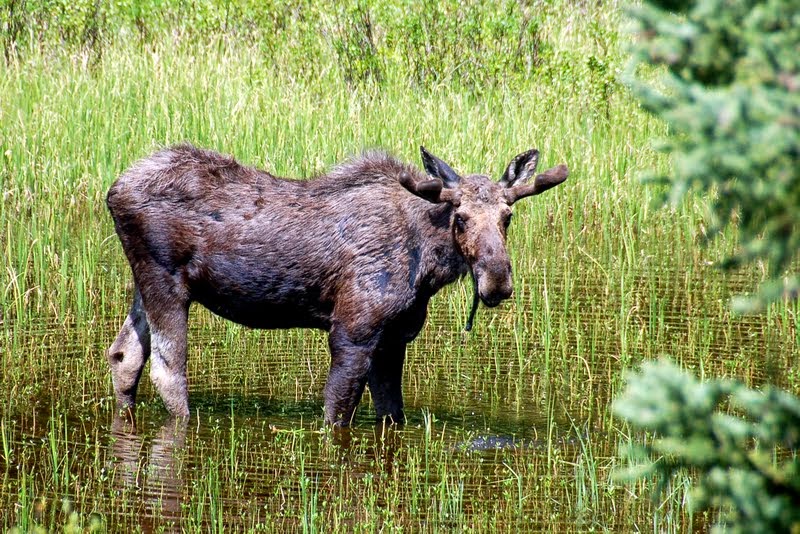 and a beautiful male moose on the way back! The hike was not too successful, as it had rained the night before and the trail was very wet and muddy. Add trail horse riders to the mix, and it was really sloppy going. We persevered though, for a about 3/4 of a mile, slogging uphill most of the way, until we came to a pretty deep water crossing that had no crossing area. We threw in the towel at that point and headed back. I like to think it was because the moose was waiting for us to come and see him :-). 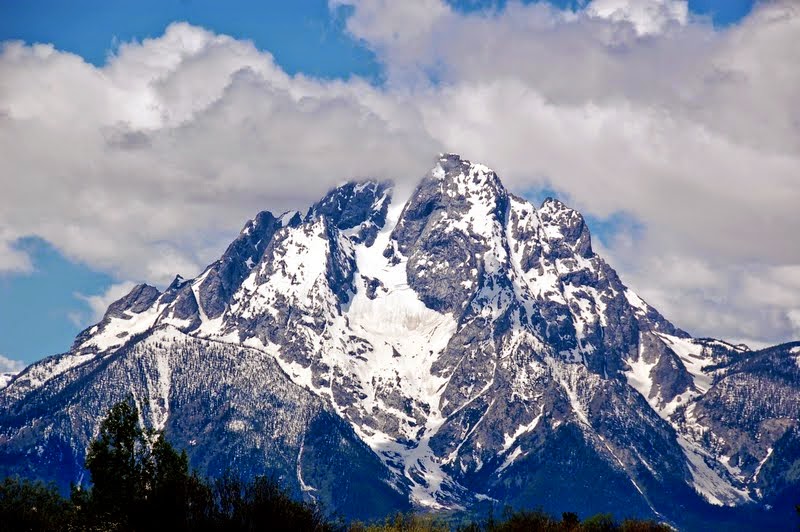 The clouds were covering the peaks today, but lent some nice shadowing to the contours.

Well I guess this is enough for now. It gives everyone an idea of where we are and what is going on. We have so much more to explore. I will also get some pictures of the inside of the cabins and Lodge, they are beautiful. And I'll also go into more detail of the work that we are doing here :-). I certainly feel at this time that it should be a very good summer for us here!
Posted by Al and Karen at 12:21 AM