A Picnic "Gone to the Dogs"

First, a "Sue Report": Sue is home with us now, having been discharged from Florida Orlando Hospital last Thursday. She is very glad to not be there anymore, but does have a substantial convalescence ahead of her. The worst is how easily she gets tired, but that will get better as she improves. We're very happy and grateful that she is with us, and continue to thank everyone for their good wishes.

Well, many of you know that all of us (Al, Casey and myself) have been very lonely since the loss of Chelsea last October. We had planned to stay a single dog family, but that has changed :-). We'd like to introduce you to the newest addition to our family, Honey! 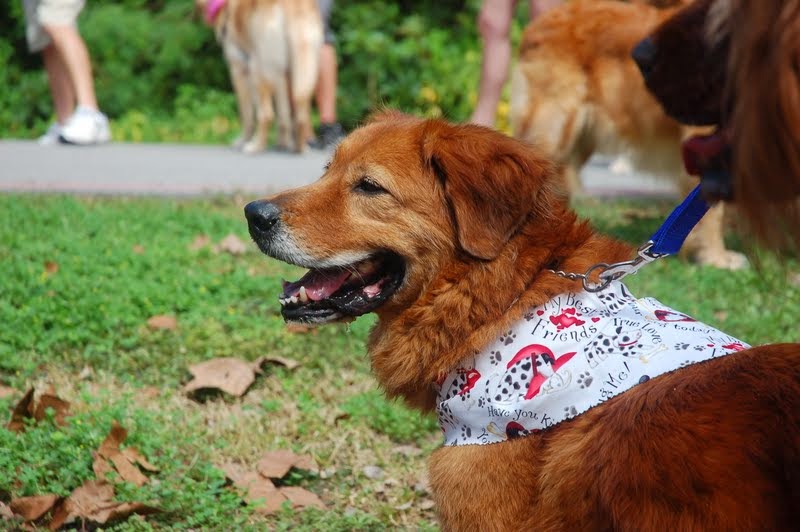 We had started talking about adopting a dog in December. Casey was doing ok, but was very lonely by himself while we were working. He had always been with her, as Chelsea was four years old when we adopted Casey as a puppy, so he grew up with her as his "big sister". We were pretty sure it was going to e a problem for him when it was her time, and had discussed the possibilty of adopting a dog before that, but it was SO fast when her time came that it wasn't remotely a possibility. Once we made the decision to adopt another golden retriever, we than decided we'd rather adopt an older dog, closer to Casey's age, and avoid the whole housebreaking thing with a puppy. We checked into rescue organizations in Florida, and found a wonderful facility, the Golden Retriever Rescue of Mid-Florida, Inc (GRRMF).

It was a fairly long process, we submitted the initial application for adoption in December, before we arrived back in Florida at Christmas. Once that was processed, we were contacted by telephone and went through an initial phone interview. After being approved, we then had to schedule an in-home interview, where a volunteer came to our home to interview us, and check out the home environment. It was quite fortunate that in stating our "alternative lifestyle" of semi-full-timing, our home interview couple turned out to do the same thing...snowbird in Florida, then head north for the summer/fall season in their coach. We had a lovely conversation with Sylvia and Bill and their golden Harley, and we subsequently passed this inspection! Once that was done and processed, we were contacted by our "co-ordinator" Leslie, who would set up potential "matches" for us based on our preferences and lifestyle. Leslie called while we were down at Fort Wilderness, and we arranged for a meeting with Honey and her foster family on February 12, down in Bradenton. Casey was invited as well :-).

Well, as you might guess, the meeting went well, and Honey ended up coming home with us that day. Her foster mom MaryAnn had the highest praise for her, what a nice quiet gentle dog she is. And we couldn't agree more, she has been a total sweetheart so far. She's not pure golden retriever, as she has very short legs and is only about half the weight that Chelsea was. So Casey is quite a bit taller, but they have been getting along very well, we're so happy. It seems to be curing him of his separation anxiety problems we had in Fort Wilderness as well. We're going down to Lake Manatee for three nights later this week, so we'll be doing some testing of how well they'll stay in the coach by themselves.

Saturday we took both dogs to the annual GRRMF Reunion Picnic down in Lakeland. What fun it was to see so many goldens all together in one place! 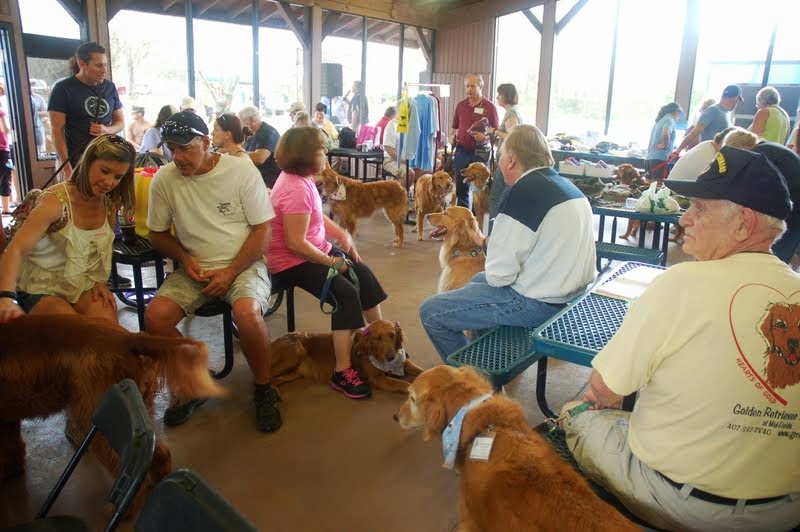 Inside the pavilion at Lake Parker Park 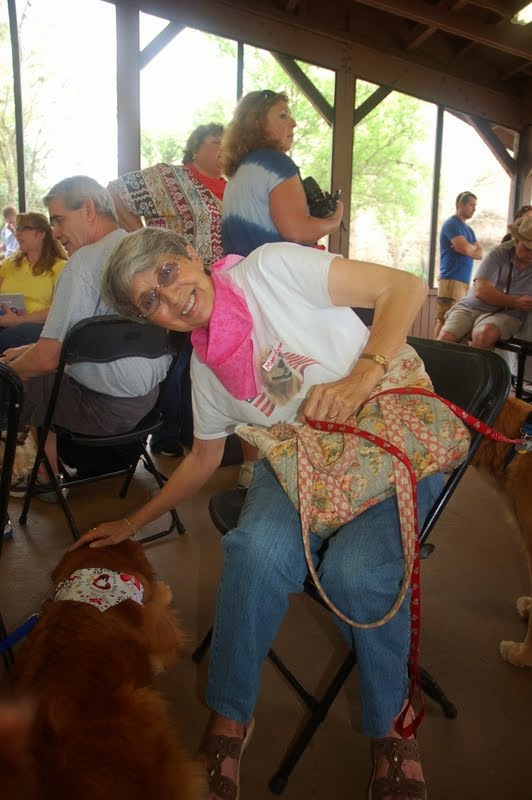 Honey laying beside her foster mom MaryAnn; she's as good about co-operating for pictures as Casey is! 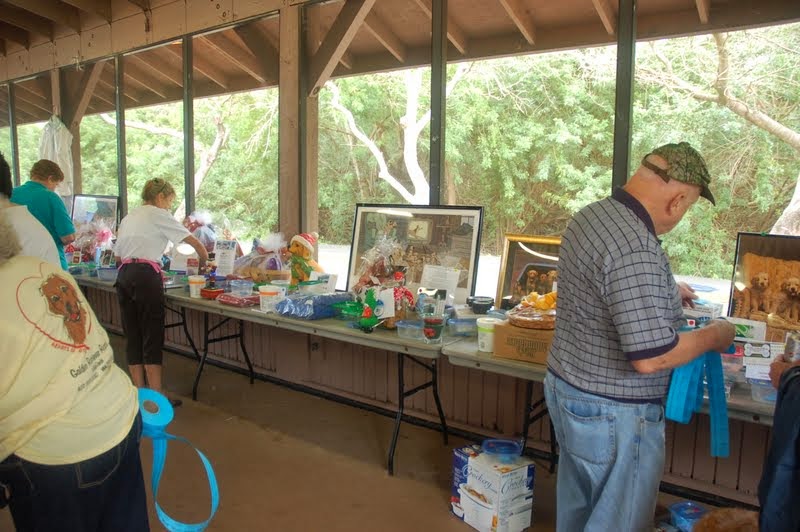 There was a Chinese auction of over 130 gifts donated by businesses from all over mid-Florida. Of course, my normal luck at raffles continued and I didn't win a thing! 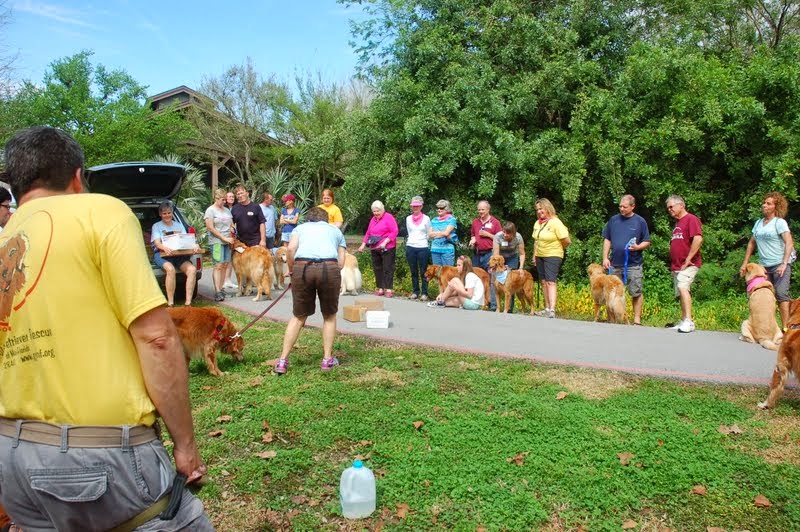 There was a large group gathered for a demonstration on "nose work",  a new sport which uses the dogs extreme sensitivity to scents to stimulate playtime for them. It was pretty interesting. 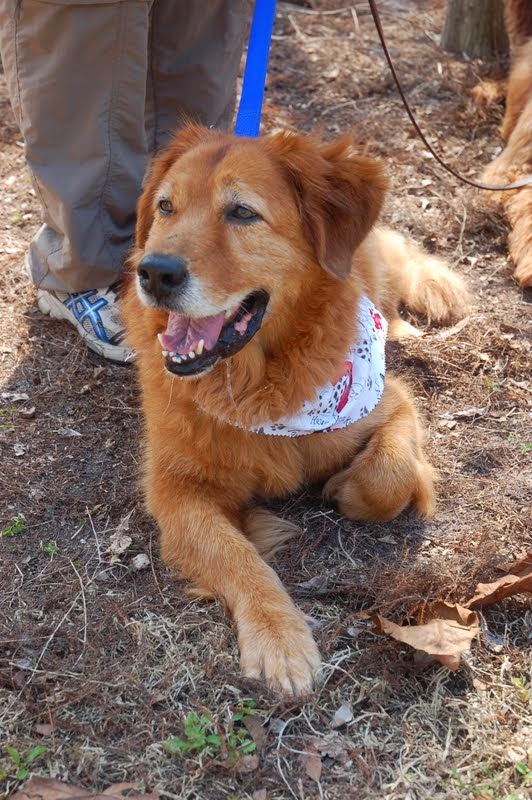 Honey seemed to be enjoying herself! 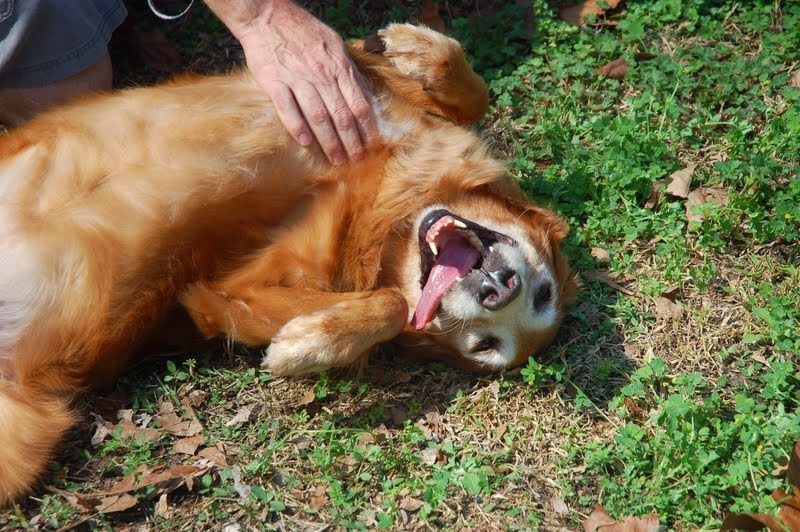 It was just an enjoyable time for everyone involved :-).
Posted by Al and Karen at 9:22 PM