Six work nights and eight days until we pull out and head for home for Christmas. The updates have been sadly lacking and I apologize. It's back to the time of year where the day/nights consist of sleep, eat, work, take two Tylenol and repeat.

We have now reached mandatory overtime as of last week. That means I now not only work the fifth night, but we go to the schedule of 12 hours...5:30PM to 5:30AM. Once you get your sleep in, there's not much time left over for anything else! Last night we did get to leave early at 4:00AM as we met and exceeded target goals by that time. I did have to wait for Al, however, as he never does get to leave early...one of the only downsides of his job there.

We did go out and try to have some fun on Thursday night, when we were both off together. We decided to drive to Louisville, and see the Christmas light exhibit called Lights Under Louisville. Its an exhibit of Christmas lights that you drive through, set up in the Megacavern, an old limestone cavern under the Louisville Zoo. 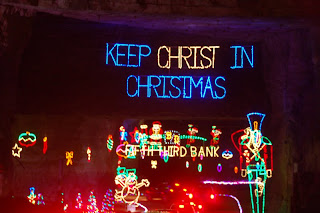 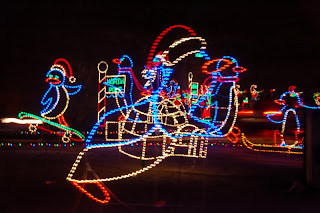 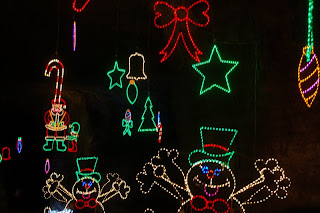 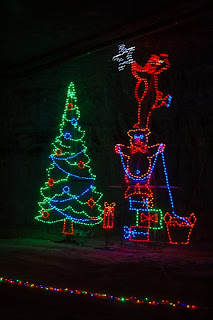 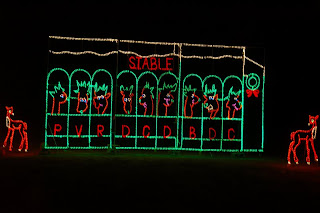 The pictures are ok, as the vehicles are not allowed to stop along the route. Its very interesting, how they are turning this once-quarry into a commercial and recreational center here in Louisville. We had also planned on having dinner at a pizza place in Louisville that had come highly recommended, but it didn't work out so well. We found the address easy enough, and even found a place to park the truck ......not always easy to do with a dually in a city! Settled the dogs in, and walked down to the restaurant, only to see a big sign on the door stating they were closed that evening due to a private party. Bummer!

So, we're tired, counting the days until departure, stiff, and thinking of a myriad of things that need to be done after Christmas...getting the crack in the trailer fixed, seeing doctors and dentists, seeing if we can find the source of the on/off ticking in the truck....but they all pale in light of the tragedy that occurred yesterday in Connecticut. Our prayers go out to the families of the victims, and the first responders and counselors that also witnessed the horrific scene. The town and people will never be the same. I really have no words, so we'll let it go at that.

Hopefully, I will be coming to you next from sunny Florida!